James Eric Davis Sr., a police officer, and his wife, Diva Davis, a realtor, showed up at Central Michigan University to pick up their son, James Eric Davis Jr. for spring break.

It could have – and should have – unfolded like many other college scenes before it: Two parents, showing up at school, to pick up their son. However, the moment escalated into tragedy when the couple was shot and killed; police allege that the couple’s son is a person of interest in the double shooting in a campus dormitory.

“The CMU Police Department has identified the victims in this morning’s campus shooting as James Eric Davis, Sr., and Diva Jeneen Davis, both 47 years old. The victims are the father and mother of the suspect,” reported Central Michigan University. The person of interest was named by the university as James Eric Davis, Jr., 19.

Authorities believe he shot both parents to death. He was arrested on the evening of March 2, 2018.

The suspect in the shooting incident that happened on CMU's campus is now in custody. Get more details at https://t.co/9LfrVQwM0i.

1. James Eric Davis Sr. Was a Police Officer Who Served as a Military Recruiter

The slain father, James Eric Davis Sr., was a police officer in Bellwood, Illinois. According to The Chicago Tribune, Davis Sr. was a “part-time police officer in west suburban Bellwood and a Illinois National Guard veteran who served in Operation Iraqi Freedom.”

The Bellwood police chief, Jiminez Allen, said in a statement that Davis Sr. “had served admirably as a part-time police officer in the Bellwood Police Department and his contributions to our community positively impacted everyone he served and served with.” He had worked for the department since 1999.

Jordan Murphy, a friend of Davis Sr., described Davis Sr. and his wife in an emotional Facebook post as “upstanding parents” who would do anything for their children. Murphy worked with the father as an Army National Guard recruiter for Operation Iraqi Freedom and said Davis Sr. was deployed to Iraq. Murphy wrote on Facebook:

To say I’m crushed, devastated even, is an understatement. I’m at a f*cking loss.

James Eric Davis Sr, Eric, to those of us who knew him, and his wife, were loving, ever present parents, who doted on their children. Eric and I worked together in the same office, as recruiters in the Illinois Army National Guard for a number of years after he spent 18 months deployed to Iraq at the outset of Operation Iraqi Freedom. Eric brought Junior (James Eric Davis Junior) to my house on several occasions, and our kids would play together. His wife was a survivor of Stage 4 Breast Cancer, overcoming all odds to beat the disease, Junior was a very respectful man, raised by upstanding parents, who would do anything to protect him and his siblings. This is an incredibly tragic event, and I pray for Eric’s other children. This is so incredibly out of character, something went wrong somewhere.

For those of you who don’t know – this is the shooting that occurred today at Central Michigan University.

Pictured below is Eric Junior – Share this – not the picture the media is using. Honor Eric and Diva and represent them positively. This – THIS is who Junior is.

He shared this photo:

Rep. Emanuel “Chris” Welch of Hillside, wrote on Twitter, “My sincerest condolences go out to the family of Bellwood Police Officer James Davis Sr. and his wife who were shot and killed this morning. May they RIP.” 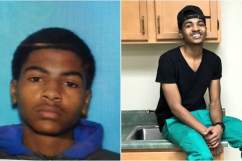 2. Diva Davis, Who Was Remembered for Her ‘Wonderful Soul’, Worked as a Real Estate Broker

Photos that Diva Davis posted to Facebook show her once working as a flight attendant. In 2015, she posted a photo next to a tropical pool and wrote, “Relaxing after a long day! Did I tell you how much I love my job? Lol.” She sometimes posted about religion, writing in 2015, “Happy Resurrection Sunday!! HE HAS RISEN!!”

However, in 2017, she changed her employment status on Facebook to self-employed and described herself as a real-estate broker from Chicago, Illinois.

Other posts showed scenes from London, Puerto Rico, and Times Square in New York City. She wrote on a post about Belgium, “You can’t come to Brussels without eating a Belgium waffle.” In 2013, she posted from Philadelphia, writing, “Happy Independence Day! Be Safe!”

Friends and strangers alike filled her Facebook page with messages of condolence. “I am in complete shock! Diva and I commuted together to opposite bases. She was such a wonderful soul. I cannot believe I won’t seeing her beautiful face again. So, so sad,” wrote one woman. A man wrote, “Just worked a 4 day with Diva that ended tuesday. What a super person!”

3. Diva Davis Was a Breast Cancer Survivor Who Wrote That She Was ‘Thankful to Be Alive’

Diva wrote: “I love you too? I’m was honored to be your cheerleader during your battle. Now we can spread the word & help others by sharing our testimony. So let’s pay it forward!! love you Diva Davis!” a friend wrote.

She posted photos of her three children too: Two sons and a daughter. In 2013, Diva wrote on Facebook, “I Thank God every day for my healing! I’m so thankful to be alive!”

In 2013, she wrote, “As a Survivor I can’t express enough the importance of having a mammogram! We must stay on too of our friends & loved ones. Also, fellas check yourself also, if you feel a knot or lump on or around your breast get it checked out. More & more men are being diagnosed.”

4. The Parents Were Picking Up Their Son, a Sophomore, For Spring Break

The Chicago Tribune reported that the parents had arrived at the university to pick up their son, a sophomore, for spring break. Davis Jr. had attended Plainview South High School in Illinois, where he played on the baseball team, according to the newspaper.

Central Michigan University wrote on its website, “Multiple police agencies – more than 100 officers – continue to search for the suspect. All planned campus events and activities are cancelled until further notice. Classes at the Mount Pleasant campus scheduled for Saturday, March 3, are cancelled.”

The university also wrote, “Central Michigan University police confirm two individuals were fatally shot at Campbell Hall on campus this morning. The deceased are not students and police believe the situation started from a domestic situation. There are no additional injuries. Campus is on lockdown as the suspect is still at large.”

The parents were packing their son’s belongings when they were shot, and video shows Davis Jr. coming from a parking lot, with the gun, and into the residence hall, according to CNN.

5. The Parents Were Described as ‘Loving’ & ‘Caring’

—> @CMUniversity identifies shooting victims James Eric Davis, Sr. and Diva Jeneen Davis as the parents of student James E. Davis Jr., who is suspected of shooting them in his Campbell Hall dorm room.
100+ officers searching for the suspect.https://t.co/KwY3Y6orCE pic.twitter.com/E2hY2V3yhV

Those who knew the family expressed bafflement by what happened. Deantre DeYoung, who knew the person of interest in high school, described the parents to The Lansing State Journal as being “loving and caring about him, and they were always on top of what he did school-wise.”

He added to the newspaper, “Whatever situation went down between them, it has to be more than him being a bad person because, as a family, they loved each other. I know that for certain.”

“At some point in the evening he was transported to McLaren Hospital due to what the officers believed may be a drug-related type incident, an overdose or a bad reaction to drugs. At that point he was released to the hospital staff,” Lt. Larry Klaus told CNN.

Read More
5 Fast Facts, Breaking News, Crime, Michigan
James Eric Davis Sr. and Diva Davis were named as victims in the Central Michigan University shooting. James Eric Davis Jr. is a person of interest in the killing of his parents.