32-year-old John Ludwick, who appeared in the Oxygen series “The Disappearance of Natalee Holloway,” is dead following an attempted kidnapping, according to police.

Police say Ludwick, seen in the above video, was killed after it appeared he tried kidnapping a woman, who subsequently stabbed him to death on the 4300 block of Wesley Lane in North Port, Florida, at about 6:50 a.m. Wednesday morning.

The now-deceased kidnapping suspect claimed to have helped cremate Holloway’s body for his friend, Joran van der Sloot, who has long been linked to the teen’s disappearance. Detectives cite a lack of evidence in the case for being the reason that no charges have been filed.

Ludwick also became infamous after an interview with Nancy Grace, where he told the no-nonsense crime reporter that he believed a Peruvian woman killed by Van der Sloot “provoked” her own murder.

1. Police Say it Appeared Ludwick Was Trying to Kidnap an Ex-Girlfriend

Authorities say a “struggle ensued” after Ludwick attempted to kidnap a young woman.

“One person is now deceased,” police stated in an initial news release. “Early in this investigation it appears that the male subject who has passed was attempting to kidnap a young woman as she exited her vehicle in her driveway. They are familiar with each other. A struggle ensued and he is the one who ended up stabbed. He then fled the area on foot. He was found nearby suffering from the stab wounds. After being transported by air he was pronounced dead at a local hospital. This investigation is ongoing. More details as they become available.”

In a second update, authorities identified the deceased subject as Ludwick, of Port Charlotte, and stated that he “died as a result of stab wounds this morning.”

“We are aware of Mr. Ludwick’s history and comments surrounding the disappearance of Natalee Ann Holloway in Aruba during May of 2005,” the release continued. “The correct authorities who are working that case have been notified. Our investigation in this local case is ongoing.”

2. In 2017, He Claimed to Have Helped ‘Cremate’ the Remains of Natalee Holloway

In Oxygen’s “The Disappearance of Natalee Holloway,” Holloway’s father, along with family-hired private investigator TJ Ward, spoke out on what they believed to be “the most credible lead he’s ever come across,” as reported by the television station.

In episode three of the show, a sting operation revealed Ludwick told an informant that he was paid to dig up and cremate Holloway’s remains.

“I can take you to where I…I got the remains,” Ludwick told an informant. He then described Holloway’s remains as being buried up a steep hill in the desert. “That’s where the fu**ing shit was hidden,” he said.

Ludwick was asked if the missing teen’s body smelled after being dug up, to which he replied: “Yeah once you dug it up, if you opened the burlap, you’re going to have the musty odor of death.” He proceeded to claim that he put dog bones where Holloway’s remains had been “presumably to throw off future investigations,” according to Oxygen.

Ludwick said he subsequently took the body to a crematorium, where he told workers the remains were that of a dog.

When asked if he felt any remorse over the alleged gruesome ordeal, in a chilling admission Ludwick said he did not. “It didn’t happen to my kid,” he stated. “Could have thrown it in the ocean, coulda flushed it down the toilet. I don’t give a s*it.”

3. Holloway’s Remains Have Never Been Found & No Charges Have Been Filed Due to a Lack of Evidence

The remains of Holloway have never been found, and no charges have been brought against anyone in relation to her disappearance.

In August of 2017, it was reported that bone fragments found in Aruba were suspected to be that of Holloway, however that didn’t prove to be the case.

Dr. Jason Kolowski, a forensic scientist who tested and interpreted the results, told Oxygen in October that tests on the bone fragments came back negative.

“Out of four individual bone samples only one was found to be human,” Kolowski said. “The mitochondrial DNA bone sample was not a match to [mother] Beth Holloway, and so it was ruled out as being Natalee Holloway.”

It was not known who the remains belonged to, or whether the person was male or female.

4. He Told Nancy Grace He Believed Stephany Flores ‘Provoked’ Her Own Murder at the Hands of Joran Van der Sloot

The killer’s lawyer claimed that his client was under stress at the time of the 2010 murder, which occurred five years after Holloway’s disappearance in Aruba. He was sentenced to 28 years in prison and ordered to pay thousands of dollars to Flores’ family.

In a jaw-dropping interview with Nancy Grace, which can be viewed above, Ludwick said he felt Flores had “provoked” her own murder by allegedly asking Van der Sloot if he was the person people believed had killed Holloway.

“You’re a friend of Joran van der Sloot, are you surprised that he’s actually plead guilty to murder?,” Grace asked.

“Well he really didn’t have a choice in this situation so I’m just hoping for the best,” Ludwick replied. “Even I can’t dispute the evidence, he obviously murdered her…I’m not saying it wasn’t provoked and I believe he did have Post Traumatic Stress Syndrome.”

“I do believe so,” Ludwick replied. “If she got the email and figured out he was involved in Natalee’s stuff, she should have just immediately left the room and not confronted him. It enraged him obviously, she shouldn’t have done that…I’m not saying she deserved it but she could’ve prevented it by just leaving immediately, and he was suffering from Post Traumatic Stress Syndrome.”

The famed crime reporter then became enraged with the heinous excuses that Ludwick continually and ruthlessly made. She ended the interview, stating:

John Ludwick, I reserve this for a very few people. But you sir, are a fool. And what you have said sets victim’s rights back hmmm maybe a couple hundred years. Take him off the screen! I don’t want to look at him anymore!

5. The Woman Who Allegedly Killed Him ‘Will Not be Charged

In a news briefing, North Port police spokesperson Joshua Taylor said though Ludwick had once wanted a relationship with the woman who stabbed him to death after he attempted to kidnap her. The unnamed woman, who was roommates with him at one point, didn’t reciprocate the feelings.

Speaking of the alleged kidnapping, Taylor said “he [Ludwick] essentially ambushed her getting out of her car, going into her home.”

In a heroic turn of events, police said the woman was able to wrestle the knife from Ludwick before stabbing her would-be captor in the abdomen.

“He then fled the area on foot,” police said in a statement. “He was found nearby suffering from the stab wounds. After being transported by air he was pronounced dead at a local hospital.”

The woman will not be criminally charged, according to Taylor.

“From every ounce of evidence we have so far, she was a victim in this case,” he said. “We have nothing to say otherwise right now.” 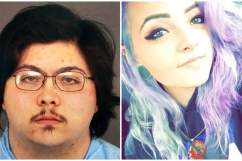 Read More
5 Fast Facts, Breaking News, Crime, Florida
wpDiscuz
0
0
Would love your thoughts, please comment.x
()
x
| Reply
Police say John Ludwick, who claimed to have been paid to cremate the remains of Natalee Holloway, was stabbed to death Wednesday after attempting to kidnap a woman. The woman, who authorities say wrestled the knife away from the man, is not being charged with a crime.