Here is the criminal complaint and affidavit

The felony charge of misconduct by a public official is punishable, upon conviction, of up to 5 years in prison and a $10,00 fine.

The criminal sexual conduct charge, “force or coercion,” is defined as engaging in “sexual contact with another person victim to use enforcer coercion to accomplish the sexual contact.” That charge is a “high court misdemeanor” and is punishable by up to 2 years in prison.

The Michigan State University College of Osteopathic Medicine dean, who stepped down in 2017, is listed as being an inmate at the Ingraham County (Michigan) Jail as of Tuesday morning.

Nassar, the former USA Gymnastics national team physician and MSU osteopathic doctor, was convicted in July of 2017 of molesting hundreds of girls and young adult women including Olympic athletes going back to 1992. According to the US Attorney for the Western District of Michigan, Nassar was sentenced to 60 years on child pornography charges and earlier this year, Nassar was sentenced to a total of 80 to 300 years in prison after he admitted to a total of 10 seven counts of sexually assaulting girls.

Strampel was Nassar’s boss at MSU from 2002 until Nassar was fired in 2016. Strampel has been on medical leave since December and the university’s administration began the process of firing him in February.

The Wall Street Journal reported that, in 2016 during a conversation with students and colleagues, Strampel said, “…patients lie to get doctors in trouble. And we’re seeing that right now in the news with this Nassar stuff. “

The Lansing Journal reported Strampel was arrested one day before a “planned update from the Attorney General’s Office on its investigation of the university” which had begun during Nassar sentencing hearings.

Strampel is scheduled to be arraigned today and the US Attorney has a press conference scheduled, according to a local media report.

“William Strampel did not act with the level of professionalism we expect from individuals who hold senior leadership positions, particularly in a position that involves student and patient safety,” Interim University President Engler said in a statement in February. “Further, allegations have arisen that question whether his personal conduct over a long period of time met MSU’s standards. We are sending an unmistakable message today that we will remove employees who do not treat students, faculty, staff, or anyone else in our community in an appropriate manner.”

Rachael Denhollander, the first Nassar survivor to publicly speak about being abused and help get Nassar behind bars, releases a statement after Nassar’s former @michiganstateu boss, William Strampel, was arrested. pic.twitter.com/JjRYIktMQj

Rachael Denhollander, one of the first victims to speak out publicly against Nassar, issued a statement Monday night after Strampel’s arrest.

“I am so grateful to see justice coming for some of the people who helped create this culture of abuse at MSU. At the same time, I am horrified and disgusted that this arrest comes directly after MSU once again filed to dismiss all claims of liability for Larry’s ability to abuse women and children for decades,” Denhollander said. “Strampel should never have been left in a position of power and MSU should have acknowledged this failure immediately. Instead, they chose to attack us and still have refused to take responsibility for any of the dynamics that lead to so many children being horrifically abused.”

John Manly, an attorney representing more than 100 of Nassar’s victims who are suing Michigan State, told the State Journal, “Our clients are encouraged by the Attorney General’s action today. It demonstrates that he is serious about investigating the systemic misconduct at MSU that led to the largest child sex abuse scandal in history and holding the responsible parties accountable.” 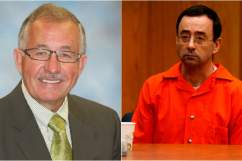