Sister Catherine Rose Holzman died in court on Friday, March 9. According to ABC 7, Holzman, 89, was part of the order of nuns known as The Sisters of the Most Holy and Immaculate Heart of the Blessed Virgin Mary.

The order has been involved in an ongoing court battle involving singer and American Idol judge, Katy Perry. The nuns had sold a piece of property that used to be their convent to a business woman named Dana Hollister back in 2015 for $15.5 million. At the same time, the LA Archdiocese accepted an offer to sell the property to Katy Perry for $14.5 million, but the nuns claim that they own the property outright and that it’s theirs to sell.

The LA Archdiocese stopped the sale to Hollister, claiming that the nuns didn’t have the right to sell the property on their own accord. A jury found Hollister “guilty of malice and fraud for allegedly interfering with the sale of the property,” Fox 11 reports.

Since that time, the nuns have been involved in court proceedings, trying to block the sale to Perry. During Friday’s proceedings, Holzman collapsed and died.

1. She Died in Court After Complaining of Chest Pain & the LA Archdiocese Released a Statement

Holzman was in court on Friday, March 9, but collapsed during the proceedings, and died.

“Sister Catherine Rose came over and she said, ‘my chest hurts.’ [She] sat down and leaned over, and that was it,” Sister Rita Callanan told Fox News. An official cause of death has not been released at this time.

“Today we remember her life with gratitude. We extend our prayers today to the Immaculate Heart of Mary community and to all her friends and loved ones. On behalf of the entire family of God here in the Archdiocese of Los Angeles, I pray that God grant her eternal rest and let his perpetual light shine upon her,” Archbishop José H. Gomez said in a statement, according to the LA Times.

Gomez is one of the people who has been fighting the nuns on the sale of the property.

2. Before She Died, She Specifically Asked Katy Perry to ‘Stop’ Pursuing the Sale & Said That it Would Be ‘a Sin’ to Allow Her to Buy the Property

Just hours before her death, Sister Catherine and Sister Rita Callanan talked with Fox 11 about the legal battle. In that interview, the nuns spoke about the ongoing legal battle.

“You have stolen the property of the Sisters of the Immaculate Heart. Please archbishop… Do what is right in your heart,” Callahan pleaded.

“We asked [Hollister] to save us, to buy the property. She had nothing to do with forcing herself on us. And to Katy Perry, please stop. It’s not doing anyone any good except hurting a lot of people,” Holzman told the outlet.

Holzman went on to say that the nuns didn’t want Perry to buy the property simply on principal alone.

“Katy Perry represents everything we don’t believe in. It would be a sin to sell to her,” Holzman said in the interview, just hours before her sudden passing.

Holzman took her vows when she was just 18 years old. She became a sister in 1947, just after her high school graduation. Generally speaking, nuns take the three vows, one of poverty, one of chastity, and a third of obedience.

To fulfill the vow of poverty a nun “gives up the right to control or benefit from personal property and commits herself to live interdependently within a community.”

To fulfill the vow of chastity, a nun “promises not to marry or to engage in romantic behavior or sexual acts.”

The vow of obedience leads a nun to “[search] for the will of God, not in arbitrary commands, but in prayerful reflection and dialogue with others.”

The nuns in the order purchased their convent (the property involved in this ongoing legal battle) in 1971. The property was purchased from Sir Daniel Donahue for $600,000, which was paid over six years.

Holzman joined the Immaculate Heart of Mary Sisters and lived in the convent until 2011.

4. She Was 1 of 5 Nuns Left in the Sisters of the Immaculate Heart of Mary & Lived in the Convent for Several Years

Since her passing, a website dedicated to the sisters’ cause has posted a message about Holzman’s death. Sister Callanan is asking people to help spread the word.

“Don’t let our precious Sister Catherine Rose have died in vain! Stand with us. Spread the word. Join your voice with the chorus of us calling for an end to the oppression and victimization of Nuns and Women Religious all over the world,” a message on the website Stand With the Sisters reads.

5. She Was Part of a Documentary That Tells the Story of the Sisters of the Immaculate Heart & a GoFundMe Page Has Been Set up to Help With Legal Fees

The Sisters of the Immaculate Heart filmed a documentary to tell their side of this story. You can watch that documentary in the video above. 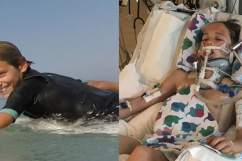 Loading more stories
wpDiscuz
0
0
Would love your thoughts, please comment.x
()
x
| Reply
Sister Catherine Rose Holzman collapsed and died in court on Friday. She had been fighting a legal battle against Katy Perry. Here is what you need to know.