Two soldiers from the 101st Airborne Division’s 101st Combat Aviation Brigade were killed Friday night when their AH-64E Apache helicopter crashed at Fort Campbell, Kentucky. The crew was conducting routine training at the time of the accident, officials said.

The crash comes in the wake of five other crashes that claimed 14 lives since March 14.

Witnesses described what appeared to be an explosion or fire in mid-air before the jet crash landed. Both aviators ejected from the craft.

The F/A-18F Super Hornet fighter jet, which crashed at 4:30 p.m., was from NAS Oceana in Virginia Beach on a training exercise.

Lt. Caleb King and Lt. Cmdr. Brice Johnson both perished in the Super Hornet crash. Johnson, a naval aviator and 2007 graduate of the U.S. Air Force Academy, was piloting the jet when the incident occurred while King, a 2012 U.S. Naval Academy graduate, was serving as the weapons systems operator. 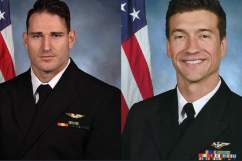 The next day, on March 15, seven were killed when, during a routine transport flight, an HH-60 Pave Hawk crash-landed in western Iraq.

The Army said the crash did not result from enemy fire.

Raguso and Zanetis were members of the FDNY.

On April 3 there were two crashes.

In the AV-8B Harrier crash in the East African country of Djibouti, a Marine pilot survived after ejecting.

“We are mourning the loss of Major Del Bagno,” said Brig. Gen. Jeannie Leavitt, 57th Wing commander. “He was an integral part of our team and our hearts are heavy with his loss. We ask everyone to provide his family and friends the space to heal during this difficult time.”

All of the crashes are under investigation.

Following the the F/A-18F Super Hornet crash in the Florida Keys, the Associated Press reported the Pentagon agreed that “budget shortfalls have eroded military capabilities, including training and flight hours, but stopped short of blaming those cutbacks for the crash of a U.S. Navy fighter jet that killed both crew members.”

There have been 25 serious mishaps involving F/A-18 Super Hornets since 2008; two were killed in the Florida crash and two fatalities were in 2011. The AP reported all 25 were considered “Class A,” which means a crew member died or the plane suffered at least $2 million in damage.

A spokesperson for the Naval Safety Center, the AP said, couldn’t explain why the increase in accidents in 2017. 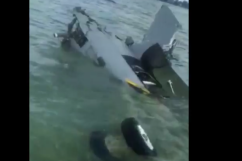