According to Metro UK, the family of Avicii appears to be suggesting the globally known Swedish dance music DJ who died at age 28 on April 20 took his own life.

“Our beloved Tim was a seeker, a fragile artistic soul searching for answers to existential questions. An overachieving perfectionist who travelled and worked hard at a pace that led to extreme stress. ‘When he stopped touring, he wanted to find a balance in life to be happy and be able to do what he loved most – music. ‘He really struggled with thoughts about Meaning, Life, Happiness. He could not go on any longer.

He wanted to find peace.

Tim was not made for the business machine he found himself in; he was a sensitive guy who loved his fans but shunned the spotlight.

Tim, you will forever be loved and sadly missed.

The person you were and your music will keep your memory alive. We love you,

Avicii was found dead in Muscat, Oman. The cause of death has not been announced by authorities.

Variety reported that a statement the family issued Monday did not provide any clues as to the cause of his death and was rather a message of gratitude for the outpouring of love and support from fans worldwide.

“We would like to thank you for the support and the loving words about our son and brother. We are so grateful for everyone who loved Tim’s music and have precious memories of his songs.

Thank you for all the initiatives taken to honor Tim, with public gatherings, church bells ringing out his music, tributes at Coachella and moments of silence around the world.

We are grateful for the privacy during this difficult time. Our wish is that it continues that way.

People gather to hear a Stockholm church’s bell as it rings out the hit single “Wake Me Up” to pay tribute to the dead Swedish DJ, remixer, record producer and singer Tim Bergling, better known by his stage name “Avicii” on April 25, 2018. – Avicii, one of the world’s most successful DJs who helped usher in the global boom in electronic music but struggled to cope with the hard-partying lifestyle, died on April 20, 2018 in Oman, his representative said.

Two years ago, the young and wildly popular EDM disc jockey stopped doing live performances and stuck to studio music-making only. “…I went back to the place where it all made sense – the studio. The next stage will be all about my love of making music to you guys. It is the beginning of something new. Hope you´ll enjoy it as much as I do,” the DJ said on his website.

But the mega-star dance music DJ had some serious health issues including ones related to alcohol use, so getting off the road, he said, was the right thing to do for his health.

“The scene was not for me. It was not the shows and not the music. It was always the other stuff surrounding it that never came naturally to me. All the other parts of being an artist. I’m more of an introverted person in general. It was always very hard for me. I took on board too much negative energy, I think,” Avicii told the Hollywood Reporter in April 2016.

Word of his death was at once shocking and crushing for family, friends, fans and colleagues, even rivals.

Devastating news about Avicii, a beautiful soul, passionate and extremely talented with so much more to do. My heart goes out to his family. God bless you Tim x

my sincerest and most heartfelt condolences to the friends, fans and families of @Avicii :( Banter aside, nobody can deny what he has accomplished and done for modern dance music and im very proud of him.

Avicii’s last tweet, three days before he was found dead doesn’t seem a portent for what would come just days later.

Thanks for the nomination! ? @billboard #BBMAS pic.twitter.com/uTjKQALeX2 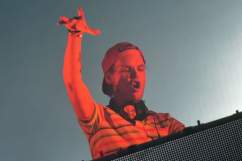 Read More
Breaking News, Celebrities
The family of of Avicii appears to be suggesting in a statement that the globally-known Swedish dance music DJ who died at age 28 on April 20 took his own life.