Getty In this 2004 photo, then-President George W. Bush delivers a tribute to his father George H.W. Bush as his siblings, Doro Bush Koch, Jeb, Marvin, and Neil look on.

Barbara Bush, the former First Lady and wife to former President George H.W. Bush, has passed away at the age of 92. She and former President George H.W. Bush were married in 1945 and have six children: George Walker Bush, Robin Bush, Jeb Bush, Neil Mallon Bush, Marvin Pierce Bush, and Dorothy Bush Koch. All their children are still living except Robin, who died in 1953. Here’s what you need to know about their children.

George and Barbara suffered intense loss in their life, dealing with a tragedy that no parent ever wants to endure. When their daughter Robin was only three, in 1953, she was diagnosed with leukemia. The doctors told them that there was no hope for a cure. They first realized something was wrong when Robin became fatigued, listless, and didn’t want to play anymore. They didn’t accept the diagnosis, and took her for blood transfusions and bone marrow tests. But Robin still died, just before she turned four.

Barbara Bush said of that moment: “I was combing her hair and holding her hand. I saw that little body, I saw her spirit go.” 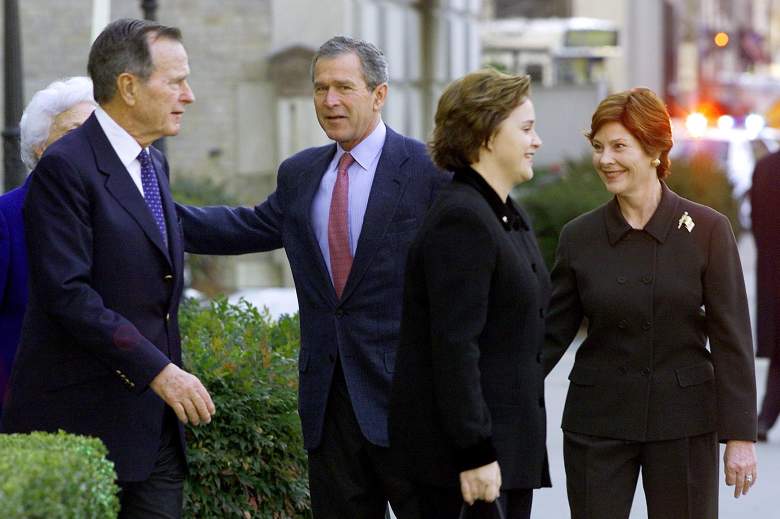 In this 2002 photo, then-President George W. Bush and his wife Laura escort his parents and his sister Dorothy as they leave St. John’s Episcopal Church. (Getty)

Dorothy Bush Koch, George and Barbara’s only living daughter, was born in 1959. She’s named after her grandmother, Dorothy Walker Bush. Dorothy has been married twice. She had two children with her first husband, William LeBlond: Samuel Bush and Nancy Ellis. They divorced in 1990.

In 1992, she married Robert P. Koch, a marriage that some coined a “Romeo and Juliet” type of match. Before they were married, Koch was a top aide for House Majority Leader Richard A. Gephardt, Baltimore Sun reported. Gephardt, a dedicated Democrat, was a frequent critic of Bush. Their wedding was at Camp David. Dorothy and Robert have two children: Robert David and Georgia Grace. 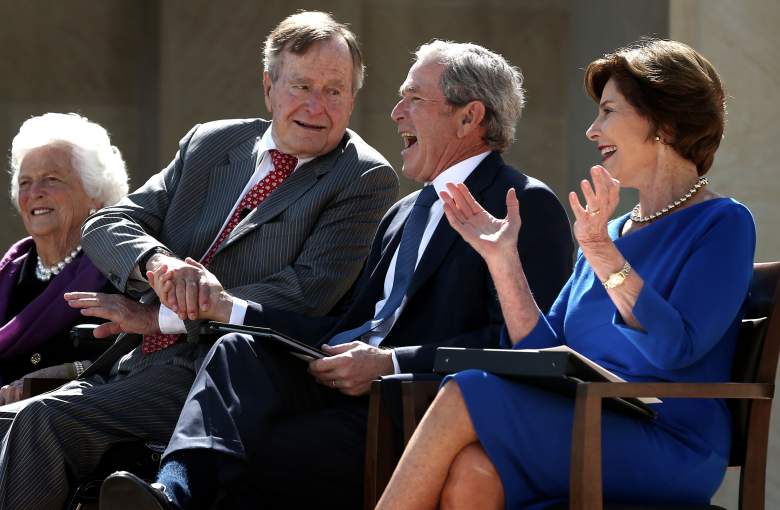 Two of George and Barbara’s children followed in their dad’s political footsteps. George W. Bush was the 43rd President of the United States, after serving as Governor of Texas. He’s the oldest son of George and Barbara. He and his wife, Laura, have two children: Barbara and Jenna. 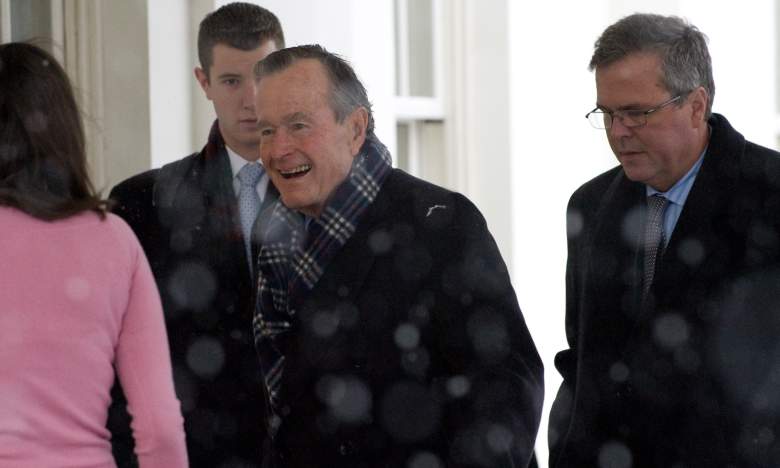 Former US President George H.W. Bush (C) and his son, former Florida Governor Jeb Bush (R), arrive at the West Wing of the White House in Washington on January 30, 2010. (Getty)

Jeb Bush ran for president in 2016 and served as the 43rd governor of Florida from 1999 to 2007. Jeb has three children of his own with his wife, Columba Bush: George P., Noelle, and John Ellis Bush, Jr. Jeb recently was in the news again when it was reported that someone was crowdfunding a red velvet birthday cake for him. 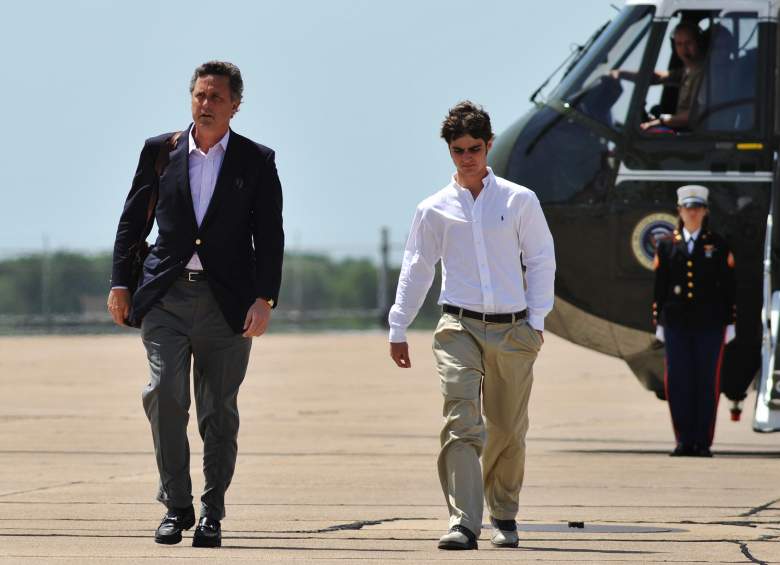 Marvin Bush and his son Walker make their way from a helicopter May 11, 2008 at the Texas State Technical College Airport in Waco, Texas. (Getty)

Marvin Bush, born in 1956, is George and Barbara’s youngest son. He was named after his grandfather, Marvin Pierce. In 2016, Marvin grabbed headlines when he announced that he wasn’t endorsing Donald Trump or Hillary Clinton for President, but was instead putting his support behind Libertarian Gary Johnson.

Marvin worked as director of HCC Insurance Holdings, a publicly traded insurance company. He also appeared in the 2008 documentary about Lee Atwater titled Boogie Man. He’s married to Margaret Conway and they have two children that they adopted in Fort Worth: Marshall Lloyd and Charles Walker.

Neil Bush Made Headlines During a Messy Divorce in 2003 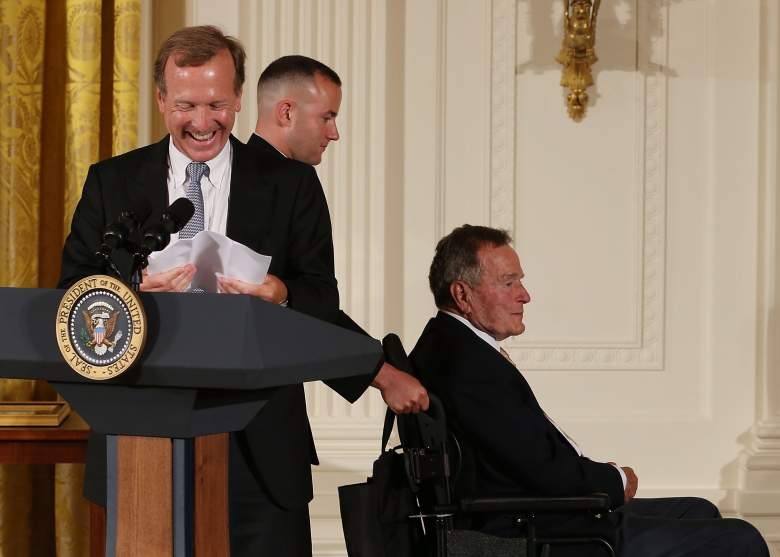 In this 2013 photo, Neil Bush (L) smiles as his father former President George H. W. Bush is pushed past during an event in the East Room. (Getty)

Neil Bush, a businessman and investor, is the fourth of George and Barbara’s six children. He was born in 1955 and was married to Sharon Smith for 23 years. They have three children: Lauren Pierce Bush, Pierce Mallon Bush, and Ashley Walker Bush. They divorced in 2003, which got public attention when he admitted to having affairs in Thailand and Hong Kong. In 2004, Neil married Maria Andrews, who volunteered at Barbara Bush’s literacy foundation. Maria’s ex-husband, Robert, sued Neil’s ex-wife, Sharon, for defamation in 2003.