Paul Ryan is a millionaire, but his net worth has increased by about 75 percent over the past decade alone. The Republican politician, who just announced his retirement as Speaker of the House, owes a great deal of his wealth to his wife, Janna Ryan. However, a series of very smart investments has also helped his portfolio. Here are more details about Ryan’s net worth.

GettyPaul Ryan holds up a pint of Guinness as he proposes a toast during the Friends of Ireland luncheon at the United States Capitol March 15, 2018.

Paul Ryan’s net worth is estimated at around $6.45 million, according to OpenSecrets. (Celebrity Net Worth estimates his worth at $7.8 million.) Although he has a lot of money now, Ryan started out humbly. When he was just a freshman in Congress, he took out a mortgage to buy three rental properties for somewhere between $100,000 and $250,000, Business Insider reported. By 2000, he bought a fourth property and his rentals were worth between $250,000 and $500,000. He flipped them a year later.

2. Much of His Wealth Comes From His Wife’s Inheritance

GettyPaul and his wife Janna Ryan

Much of Ryan’s wealth actually comes from his wife, Janna. According to OpenSecrets, he has 67 assets and the top asset is the Prudence Little Living Trust, worth $1 to $5 million. After Janna’s mother, Prudence Little, passed away in 2010, Janna inherited between $1 million and $5 million, The Seattle Times reported. Her parents were very successful oil and gas mineral rights lawyers in Oklahoma, the LA Times reported. But an even greater percentage of Janna’s family’s wealth comes from her grandfather, Reuel Winfred Little. In 1927, he graduated from the University of Oklahoma law school with just $25. He became a millionaire several times over, once from a patent, once from legal work, and once from redeveloping military housing.

3. Paul Ryan’s Net Worth Makes Him the 34th Richest Person in the House

OpenSecrets estimated that Ryan’s current net worth places him as the 34th richest member of the House. His net worth increased significantly from 2009, when he was estimated to be worth about $1.6 million.

5. He Has Several Investment Partnerships & Also Invests in Technology

Ryan’s money also comes from several strategic investment partnerships. He owns a little over 21 percent of Ryan Limited Partnership, which was worth between $100,000 and $250,000 in 2011, Business Insider reported, and according to OpenSecrets is now worth between $250,000 and $500,000. The partnership has grown through smart diversification. He also has a stake in Ryan-Hutter, an investment partnership worth between $500,00 and $1 million as of 2016. One of Ryan-Hutter’s big wins has come through investments in Home Depot. Ryan’s also invested in Red River Pine LLC, a timber interest company, and he has a small stake in the oil industry and a mineral and mining company.

Ryan also enjoys investing in technology. He has several mutual funds that invest in technology and he has $2,000 to $30,000 in Apple, according to Business Insider. He also has up to $15,000 in Google stock, IBM, and Oracle. Not only that, he used to own stocks that he later sold in HP and Intel. 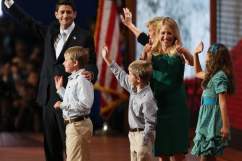 Read More
5 Fast Facts, Breaking News, Paul Ryan, Politics, Republicans
Follow Heavy ↓
Paul Ryan is a multi-millionaire, but much of his net worth comes from his wife, Janna Ryan.