Just one day after an engine on a Southwest flight exploded — blowing out a window and leaving one passenger dead — stories surfaced about the other passengers on the plane who tried to help in any way they could.

Passenger Jennifer Riordan died following the incident, in which she was partially sucked out of the plane’s window. A few passengers on the plane worked together to pull the 43-year-old mother of two back into the plane, and performed CPR on her. Despite their heroic efforts, Riordan later died from her injuries.

Peggy Phillips, a registered nurse, teamed up with fellow passengers Andrew Needum, a firefighter, and Tim McGinty, a ranch hand, helped pull Riordan back into the plane and treat her to the best of their abilities. Phillips, Needum, and McGinty became instantly bonded under such extreme circumstances.

1. Phillips, Needum, McGinty, & Riordan Were Traveling From New York to Dallas When the Aircraft’s Engine Exploded About 20 Minutes Into the Flight

Southwest Flight 1380 took off from La Guardia Airport in New York on Tuesday, April 17. About 20 minutes after take off, the plane’s port side engine exploded, sending shrapnel flying into the air. A piece of flying metal struck a window near the plane’s wing, causing it to break. The woman sitting in that respective window seat — Jennifer Riordan — had her body pulled out of the plane due to the incredible force.

As Riordan’s body was being pulled, Tim McGinty sprang into action, rushing to her row and grabbing ahold of her, determined to bring her back inside the plane. Andrew Needum also offered his help, working with McGinty to get Riordan back inside the aircraft.

The two men were able to bring Riordan back inside the aircraft, but she was unresponsive. That is when Peggy Phillips, who was sitting in front of Riordan, offered her assistance. Phillips, a retired registered nurse, and Needum, a firefighter and EMT, began administering CPR on Riordan. McGinty did his best to block the open window.

“All three of them abandoned [their] own oxygen mask[s] to try to help the woman,” reports the Daily Mail.

The plane made an emergency landing in Philadelphia. Riordan was transported to a nearby hospital, but she succumbed to her injuries.

2. Phillips Is a Retired Registered Nurse From Texas

‌McGinty with Phillips at the airport.

Peggy Phillips is a retired registered nurse, but appears to still practice. She is currently listed as the school nurse at Joe Lawrence Elementary School in the Mesquite Independent School District in Mesquite, Texas.

Phillips was traveling home to Texas when the unthinkable happened.

“If you can possibly imagine going through the window of an airplane at about 600mph, and hitting either the fuselage or the wing with your body, with your face. … I can probably tell you that there was significant trauma to the body. Significant head trauma, facial trauma,” Phillips told ABC News.

You can watch Phillips’ and a few other passengers speak with Good Morning America in the video below.

Southwest passengers recall horror of deadly flightMarty Martinez and Peggy Phillips describe the scene aboard Flight 1380 as it was forced to make an emergency landing2018-04-18T13:38:22.000Z

3. Andrew Needum Is a Firefighter & EMT Who Was Traveling With His Family

Andrew Needum was traveling from New York to Texas with his wife, their two children, and his parents, according to the Daily Mail. The Needums were in New York City on vacation.

“I sat back down and looked across the aisle to my wife after we heard some commotion in the rear of the plane. I looked at my wife, looked in her eyes, and she gave me the approval to go back there,” Needum told the press.

Needum helped Tim McGinty pull Riordan’s body back into the plane. He then helped Phillips give Riordan CPR. He is a firefighter and EMT at Rowlett Fire Rescue in Texas. He also works at Celina Fire Department. He graduated from Tarleton State University.

Needum also spoke to the media about the plane’s pilot, Tammie Jo Shults.

4. Tim McGinty Is a Ranch Hand

Several passengers on the plane described “a man in a cowboy hat” helping others in need. Meet Tim McGinty.  McGinty is a farm and ranch real estate worker, according to USA Today. He and his wife, Kristin, were seated a few rows ahead of the wing.

McGinty assisted in helping his fellow passengers to the best of his ability. He was the first person to jump in and try to pull Riordan’s body back into the plane. Once she was inside and receiving CPR, he did his best to cover the window.

McGinty did a few interviews with the media after arriving at the airport. His wife was on the flight with him. She shared the following message on Facebook.

“I have never been so scared in my life. Thank you all that prayed for us. I had the opportunity to witness what putting others first truly meant. God bless them all and we thank God for his care in landing our plane. Southwest did a great job in what was a horrific accident. I pray for Jennifer’s family as they mourn their loss and I thank God for His provisions and our safety,” Kristin wrote.

5. Jennifer Riordan Is Survived by Her Husband & Their 2 Children

Jennifer Riordan is survived by her husband, Michael, and their two young children, Averie, 12, and son, Joshua, 10. Riordan worked for Wells Fargo and was headed home to Albuquerque, New Mexico, with a stop in Dallas on her route.

Riordan’s family has released a statement about her passing. You can read that statement below.

“Jennifer Riordan has passed away as a result of previously reported events on Southwest Airlines Flight 1380. Jennifer’s vibrancy, passion, and love infused our community and reached across our country. Her impact on everything and everyone she touched can never be fully measured. But foremost, she is the bedrock of our family. She and Mike wrote a love story unlike any other. Her beauty and love is evident through her children. We are so appreciative of the outpouring of support from family, friends, and our community. We do ask that those who seek to express their condolences and prayers, as well as media outlets, respect our privacy at this time. Our family and friends need this time to both grieve and celebrate Jennifer’s impact on us all. In her memory — please remember to always be kind, loving, caring, and sharing.” 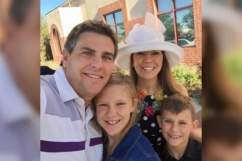