A man who was arrested at the White House last summer while trying to set up a meeting with President Donald Trump opened fire at a Waffle House in Tennessee early Sunday morning, killing four people and wounding two others before he was stopped by a heroic diner, authorities say. The shooter fled from the scene and remains at large, according to police.

The gunman, identified by police as Travis Reinking, 29, of Morton, Illinois, began shooting patrons and employees with an AR-15 rifle about 3:25 a.m. at the 24-hour restaurant on Murfreesboro Pike in Antioch, near Nashville, police said. A total of six people were shot, according to Metro Nashville Police, who are leading the investigation with help from state and federal agencies. Three victims were pronounced dead at the scene. One victim then died at the hospital and two are currently hospitalized, according to authorities.

In July of 2017, Reinking was arrested for trying to scale a fence at the White House. Following the incident, authorities seized the alleged killer’s weapons, including an AR-15 rifle authorities said he used in Sunday’s horrifying attack. USA Today reported that the guns had been given to his father after being seized, but the man told authorities he gave the weapons back to Reinking.

Reinking has been added to the Tennessee Bureau of Investigation’s top 10 most wanted list, police announced Sunday afternoon.

During the White House encounter, authorities say Reinking requested to speak with President Trump while blocking a pedestrian entrance, alleging that he was a sovereign citizen.

Reinker “began to take his tie off and balled it into his fist…walked past the security barriers stating, ‘Do what you need to do. Arrest me if you have to,'” the report obtained by USA Today states:

Travis Reinking, the Waffle House shooting suspect, was arrested in July outside the White House.
He told Secret Service twice he wanted to talk to President Trump. When told to leave, he took off his tie, balled it in a fist & told agents to arrest him.https://t.co/UEr5PFWEmE pic.twitter.com/o1PTFuFndz

After refusing to leave the area, agents arrested Reinker.

What exactly is a sovereign citizen? Forbes defined the term as follows:

The short answer: a sovereign citizen is someone who believes that he or she is above all laws.

The long answer is a bit more complex.

Think about a law you don’t like. Any law, at any level of government. It can be a big law, like paying income taxes, or a tiny one, like licensing your pet Chihuahua with the county.

If you’re a member of the Tea Party movement, the solution to this bad law is to protest your opinion in DC and in other metropolitan areas, write angry letters to your Congressmen, and vote for politicians who agree with you that such a law should be scrapped as soon as possible.

If you’re a member of the sovereign citizen movement, your approach is a bit different. You start by looking for a combination of quotes, definitions, court cases, the Bible, Internet websites, and so on that justify how you can ignore the disliked law without any legal consequences. Be imaginative. Pull a line from the 1215 version of the Magna Carta, a definition from a 1913 legal dictionary, a quote from a founding father or two, and put it in the blender with some official-sounding Supreme Court case excerpts you found on like-minded websites. Better yet, find someone else online who disliked that same law and pay them $150 for a three-ring binder filled with their word salad research.

Et voilà, not only have you proven that you don’t have to obey the law you dislike, heck, it’s your patriotic duty to disobey it, and anyone who tells you otherwise is just plain un-American and is probably part of a world-wide Jewish conspiracy to ensure that Chihuahuas are slaves to the US government.

When you can pick and choose which laws to put through your special blender, you are effectively putting yourself above all laws.

This thread will provide a snapshot of the Anti-Government Extremist movement in the US as of April, 2018. pic.twitter.com/Dv4ZES8Tfu

As to what draws people to the anti-government movement, writer J.J. MacNab stated in the Intelligence Report that “Newcomers drift into the movement in a variety of ways.” While MacNab said the movement originally attracted white supremacists and anti-Semites for the most part, she added that “most of its new recruits are people who have found themselves in a desperate situation and are searching for a quick fix,” while “others are intrigued by the notions of easy money and living a lawless life, free from any unpleasant consequences.”

Police reports obtained by Heavy,which can be read above, show a delusional man whose family said he had been suicidal in the past.

In an Illinois police report from May of 2016, the suspect was described as “delusional and believed the famous entertainer, Taylor Swift, was harassing him via stalking and hacking his phone.” The report, which you can read in its entirety above, states, in part:

Travis further explained how Taylor Swift was harassing him. Travis stated a few weeks ago Taylor hacked his Netflix account and told him to meet her at Dairy Queen in Morton. When Travis arrived, Taylor was across the street yelling at him before she took off running. Travis chased her in an attempt to get her to stop harassing him. Taylor climbed up the side of a building and Travis followed. However, when he reached the rooftop, Taylor was gone.

Reinking then claimed to police that “he was telling the truth and he had proof in his phone,” the report said. “However, Travis would not show his phone.” 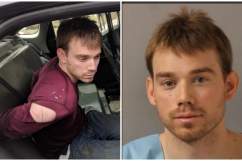 Loading more stories
wpDiscuz
0
0
Would love your thoughts, please comment.x
()
x
| Reply
Travis Reinking is suspected of killing 4 people and wounding 2 others in a shootout at a Tennessee Waffle House. He claimed he is a sovereign citizen to the FBI. Learn more here.