The California Highway Patrol has confirmed that a female protester was struck and injured by a sheriff’s squad during Stephon Clark protests in Sacramento. The incident remains under investigation, according to CHP.

You can watch video of the moment the woman, identified as Wanda Cleveland, was struck here. She is seen falling to the ground when the vehicle strikes her. According to ABC News, she was listed in stable condition after the incident. The Sacramento Bee reported that the sheriff’s vehicle left the scene after hitting Cleveland.

Guy Danilowitz of the National Lawyers Guild, took the video, which widely circulated on Twitter, according to the Bee. He posted it on his Twitter page. Some photos from the moment Cleveland was struck also circulated on social media. You can see them here, although the quality is not very high.

A cop car just slammed a protester at the vigil for Stephon Clark. These are three blurry photos of it happening. pic.twitter.com/5yJxoqMEPy

Alexei Kosoff, of the Sacramento Bee, was one of the journalists who identified the injured woman as Cleveland. “Wanda Cleveland said when the first vehicle told protesters to clear the street, she started to walk toward the curb because her arthritis was making her knees weak. The second driver made no request, she said, abruptly accelerated and hit her in the knee,” he wrote on Twitter.

"We are living in communities that are like warzones." https://t.co/3CLMivAwSr pic.twitter.com/gEXkauwfZS

Journalist Sawsan Morrar wrote on Twitter, “Sac sheriff hit a protestor in #Sacramento and sped off. Did not stop. I spoke with the victim Wanda Cleveland for the @washingtonpost 30 min before she was hit and she told me “the police will never touch me again.” #StephonClark.” Others shared the license plate of the sheriff’s vehicle in question on social media.

Word of the incident quickly gained lift on social media. “A Stephon Clark protester was hit by a Sacramento County sheriff’s vehicle during a vigil. Protesters said the vehicle hit activist Wanda Cleveland and then sped off. She laid immobile in the street until the fire department arrived to pick her up,” the Fair Punishment Project wrote.

The protests have ignited over the death of Stephon Clark, 22, who was shot and killed in his own backyard. A doctor hired by Clark’s family alleges that he was shot eight times in all, with six of the shot striking Clark in the back. The shooting has become the latest flashpoint in the United States over a police-shooting death of an African-American man. Days of protests erupted over the shooting death.

The unrest comes after similar protests erupted previously in other states, including in Minnesota, North Carolina, and Missouri. The State Hornet newspaper wrote on Twitter that Cleveland is in her 60s. Friends came to her aid.

Friends of the woman struck by a Sacramento County Sheriff's Vehicle at a #StephonClark vigil have identified her as 61-year-old Wanda Cleveland.

Sacramento police previously alleged that Clark “turned and advanced toward the officers while holding an object” extended in front of him,” CNN reported, but, the only item found with Clark’s body turned out to be a cell phone.

You can learn more about Clark’s death here: 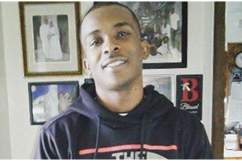