Meek Mill was released from prison today. And Philadelphia 76ers co-owner Michael Rubin picked him up …to take him to a game.

On the way to the sixers game let’s go!!!! #meekfree

FacebookMeek Mill out of prison.

But Meek made it to the Wells Fargo Center and was greeted by Rubin’s family, friends and team members.

The Pennsylvania Supreme Court overruled the judge that has repeatedly sent Meek back to jail for technical probation violations and ordered he be immediately released from prison on bail. In the order, the state’s highest court granted Meek “extraordinary relief” because of the flawed case against the rapper based on the testimony of a witness, former Philadelphia police officer Reggie Graham, who even prosecutors agree has “credibility issues.”

“As such, the Commonwealth agreed that (Meek) is entitled to PCRA relief. Moreover, as reflected in filings in this Court, the Commonwealth has stated it is not opposed to Petitioner being granted immediate bail.”

HAPPENING NOW: Crowd gathers outside the State Correctional Institution in Chester, PA where Meek Mill is expected to be released pic.twitter.com/q0OowvR9GC

Judge Genece Brinkley has regularly locked Meek up over the course of more than a decade and it’s been alleged that the judge has targeted Meek and also has credibility issues related to this case.

.@MeekMill attorney statement: “We are thrilled that the Pennsylvania Supreme Court has directed Judge Brinkley to immediately issue an order releasing Meek on bail. As we have said all along, Meek was unjustly convicted…” more @FOX29philly NOW

Fans waited outside Chester State Correctional Institution for the MC to be let go.

.@FOX29philly Meek Mill's representatives being briefed by Warden about his pending release from prison.#fox29 pic.twitter.com/dNwvZUfCrW

An hour before, comedian and Meek friend Kevin Hart, rapper Rick Ross and Philadelphia 76ers co-owner Michael G. Rubin all posted on social media that Meek was being released. Rubin said Meek would be at Game 5 against the Miami Heat. By 6 p.m. while considered “free,” Meek was actually still inside Chester prison because of the logistics of releasing him. police barricades made using school buses were positioned to hold back fans.

The plan was for Meek to make the game and “ring the ceremonial bell.” Rubin also said he’d be the one picking Meek up from prison.

@meekmill is FREE!!! Just left visiting Meek with @kevinhart4real and I’m on the way back to pick him up as we speak! #MeekisFree #GoSixers

FREE!!! Just left visiting Meek with @kevinhart4real and I’m on the way back to pick him up as we speak! #MeekisFree #GoSixers

Meek, Rubin and Hart all posted the same pic to Instagram.

Meek posted a prayer of sorts. And a promise. Within 30 minutes, the post had half a million likes.

“I’d like to thank God, my family, my friends, my attorney’s, my team at Roc Nation including Jay Z, Desiree Perez, my good friend Michael Rubin, my fans, The Pennsylvania Supreme Court and all my public advocates for their love, support and encouragement during this difficult time. While the past five months have been a nightmare, the prayers, visits, calls, letters and rallies have helped me stay positive. To the Philadelphia District Attorney’s office, I’m grateful for your commitment to justice – not only for my case, but for others that have been wrongfully jailed due to police misconduct. Although I’m blessed to have the resources to fight this unjust situation, I understand that many people of color across the country don’t have that luxury and I plan to use my platform to shine a light on those issues. In the meantime, I plan to work closely with my legal team to overturn this unwarranted conviction and look forward to reuniting with my family and resuming my music career.”

As Heavy first reported in mid-March, rapper Meek Mill’s original conviction that led to a jail sentence and probation, which led to him violating the conditions of that probation as deemed by the judge so often that he’s been back in and out of jail and has been locked up for months. The essence of his legal team’s case is that former Philadelphia narcotics squad cop Reginald V. “Reggie” Graham lied about Meek; perjured testimony from a disgraced narcotics officer set off a Newton’s cradle of hell for the rapper. The truth about those lies, is what set the ‘Nightmares & Dreams’ MC free. 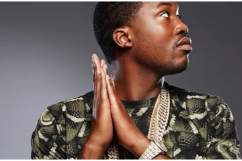 Loading more stories
wpDiscuz
0
0
Would love your thoughts, please comment.x
()
x
| Reply
Meek Mill was released from prison today. And 76ers co-owner Michael Rubin picked him up to take him to a game.