A Baltimore police officer was killed Monday afternoon after responding to a report of suspicious activity and a burglary in progress in the Perry Hall area of Baltimore County, CBS Baltimore reported. A suspect in her death, 16-year-old Dawnta Harris, was taken into custody after initially fleeing the scene, CBS Baltimore reported. Early reports on Monday had indicated that she died from being shot, but later reports from witnesses indicated that she was hit by Harris’ car. On Tuesday, the medical examiner ruled her death a homicide, saying she died of major trauma to her head and torso.

Here is what you need to know about the suspect and the shooting. This is a developing story.

1. Dawnta Harris Was Arrested on Suspicion of Killing Amy Caprio, a Baltimore Police Officer, and Will Be Charged as an Adult

Our thoughts and prayers are with family, friends and colleagues of Police Officer Amy Caprio #EOWMay212018 @BACOPoliceFire pic.twitter.com/PYH2E9vGz5

Dawnta Anthony Harris is the suspect who was arrested on suspicion of killing Amy Caprio, a Baltimore police officer. Harris is from Gilmor Homes in West Baltimore, the same complex were Freddie Gray lived, CBS Baltimore reported. (Gray had died in the hospital from spinal injuries a week after he was taken into custody.)

Harris is charged with first degree murder and will be tried as an adult, officials said.

Baltimore County Police Chief Terrance Sheridan said in a press conference: “He (Harris) did an act which impacts a family, a spouse, brothers and sisters in law enforcement–the institution. That young man has done an act in which he should be treated as an adult.”

Tony Kurek was with Caprio shortly after she was injured, he told the Baltimore Sun. He said he had just walked inside his Perry Hall home when his son told him that a cop was run over. Dakota Kurek, 20, said he saw the officer draw her gun on a black Jeep Wrangler and order the people inside to get out of the car. But the driver sped forward and hit the officer instead. She landed 20 feet away. He called 911.

Tony’s other son, Logan, is a volunteer firefighter. Logan, 23, began doing CPR. He was afraid that she was already gone. “Her eyes were wide open,” Tony told the Baltimore Sun. “I had a very, very bad feeling that she was going or gone.”

2. Dawnta Harris Had Been Arrested Multiple Times, His Last Sentence Required Him to Wear an Ankle Bracelet, & a Judge Called Him a ‘One-Man Crime Wave’

Dawnta Harris has a record of car theft in the juvenile system and had been arrested multiple times before, CBS Baltimore reported. He was arrested four times for auto theft since December 2017, and for his last sentence he had been sentenced to home detention wearing an ankle bracelet, WMAR-TV reported. The Jeep he was driving was stolen.

“Your client, in the last six months, is a one-man crime wave,” a Baltimore County judge said during Harris’ bail hearing, WBAL-TV reported. “I’m not sure any facility is secure enough to hold him.”

Caprio’s tragic death unfolded when police received a call around 2 p.m. Eastern on Monday in the Perry Hall region. Early reports said the call was about a suspicious vehicle, but during a press conference police said it appeared to be a burglary in progress.

At 2:00 pm #BCoPD received a call for a suspicious vehicle in the unit-block of Linwen Way, 21136. An officer has been injured and taken to a local hospital. Continue to searching for at least one armed suspect. ^SV

Caprio was injured on Linwen Way, and residents in the area on Belair and Klausmeier road were told to shelter in place, WBAL-TV 11 reported. She was taken to Medstar Franklin Square and pronounced dead a short time after arriving, CBS Baltimore reported. Gov. Larry Hogan confirmed she had died after officials spoke with her husband about what happened.

The suspects fled the scene and were at large, but all four have since been taken into custody.

Local elementary schools in the area were placed on lockdown while police searched for the suspects. The schools were held over due to police activity in the area, which meant that students were not released at the regular time that the school day was ending. Some local schools even had to serve dinner to their students while they remained on alert status Monday night. By 7 p.m. Eastern, nearly 2,000 students were still sheltered in place, and were released by 10 p.m.

3. Harris Told Police that He Started to Open the Driver’s Door When the Officer Told Him to Get Out, and Then Shut the Door & Drove at Caprio Instead

According to police records, Harris was waiting in his Jeep Wrangler while the people with him, who are also now in custody, were committing a burglary. He tried to flee when he saw Caprio arrive, but drove down a cul-de-sac and had to turn around in Linwen Way. He said that Caprio followed him, exited her car, and ordered him to leave the car. He said that he partially opened his door, but then shut it and drove at Caprio. He later left the Jeep on Dawnvale Road.

You can read the statement of probable cause in the tweets below:

In statement of probable cause, teen admits to running over officer while 3 friends burglarized a Perry Hall home. #WJZ pic.twitter.com/piTCOD9xI5

Witnesses told WBAL-TV that they saw a Baltimore police officer pull over a vehicle and then pull her gun. At that point, the car accelerated, witnesses said they heard a shot, and then the driver ran over the officer.

Police said that the group were involved in burglaries in the area, the Baltimore Sun reported. They had been told to search the area for stolen property.

During a press conference, officials would not confirm how the officer died. Shawn Vinson, Baltimore County Police spokesman, said “We probably won’t know until an autopsy is completed by the medical examiner.” It was unclear if the officer had fired at the suspects, or if she had been shot herself, CBS Baltimore reported. But on Tuesday, the details became clearer. The medical examiner ruled her death a homicide and said she had died of major trauma to her head and torso.

4. Amy Caprio Was Supposed to Leave in a Few Days to Celebrate Her Birthday & Third Anniversary

Amy Caprio died just six days before her birthday, according to her obituary. She and her husband were supposed to leave for a week-long vacation starting this weekend, CBS Baltimore reported. They were going to celebrate their birthdays and their third anniversary.

Her family asked that in lieu of flowers, contributions in Amy Sorrells Caprio’s memory be made to the Humane Society of Harford County or the Police Assistance Fund. This was likely because of her deep love for dogs. In fact, she loved them so much that she always had treats with her when she was on patrol, CBS Baltimore reported. She also loved the outdoors, kayaking, and mountain biking.

Caprio solved a series of package thefts in December and January, the Baltimore Sun reported. She reviewed security camera footage, interviewed witnesses, and compared notes from other package thefts in the region. She was able to track down two suspects who were linked to dozens of stolen packages in the region. The suspects’ hotel room was filled with stolen goods, including a quilt with a special inscription to a woman’s granddaughter. She was named officer of the month in December for her work.

5. Police May Charge the Other Three Suspects with Felony Murder for Their Involvement

BREAKING:Officer has died after shooting in Perry Hall. Just pulled up in Perry Hall and saw officers with guns drawn around corner of a house. pic.twitter.com/LXEbKYGSrp

Early on Monday, police said they were looking for the four male suspects in their teens and 20s, CBS Baltimore reported.  On Tuesday morning, police announced that they had all four suspects in custody. Officers were seen surrounding a house in the area on Monday, with their guns drawn, around 2:30 p.m., reported Avajoye Burnett from WJZ. Police were actively searching homes in the area for armed suspects, and shut down nearby roads so residents would not drive into the area. It’s not yet known where all four suspects were finally located.

The other three teen males who were with Harris are 15, 16, and 17, WBAL-TV reported. The Baltimore County State’s Attorney said he believes they can charge the other three teens for felony murder, based on what happened while they were committing a burglary.

Sources told WBAL-TV that Harris and his accomplices had targeted the Perry Hall home because they believed the home had guns inside. Harris abandoned the Jeep on the 9500 block of Dawnvale Road, not far from where Caprio was hit.

Harris is being held at the Baltimore County Department of Corrections and was ordered held without bail.

Gov. Larry Hogan shared his condolences about the passing of the police officer in a message on Twitter. He said, “We are deeply saddened to learn of the passing of a Baltimore County Police Officer after she was shot in the line of duty today. Our prayers go out to this brave officer’s family, @BACOPoliceFire, and the Baltimore County Community.” 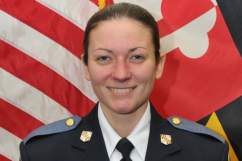