George Zimmerman has been charged with stalking private investigator Dennis Warren after Zimmerman became angry over a documentary that was being produced about Trayvon Martin. The misdemeanor charge was filed in Florida and a summons was served to Zimmerman on May 3. Police wanted a felony charge, but the state attorney’s office decided to bring a misdemeanor charge instead. Zimmerman sent numerous threats to Warren, according to police records, including threats about feeding people to alligators.

Here is what you need to know about Dennis Warren and what happened.

1. Dennis Warren Was Working on a Documentary About Trayvon Martin

It was Warren’s attempt to contact Zimmerman that initially got him on Zimmerman’s radar. On September 21, Warren left a voicemail and text message for Zimmerman, letting him know that the producer, Mike Gasparro, wanted to talk to him about the film, according to police records. Zimmerman called the producer after getting Warren’s message, and Warren did not contact Zimmerman again after that.

By December, Gasparro was receiving agitated messages and physical threats from Zimmerman, aimed against him and Warren. One of those messages read: “Help Mrs. Warren out and give him a head’s up, I’m going to find him. And I’m bring hell with me,” according to police records. Records indicate that he also texted Gasparro with: “Dennis is a ****ing **ssy who bothered my uncle in his home. Local OR former law officer. He’s well on his way to the inside of a gator as well. 10-4?”

According to court documents, Zimmerman then began texting Warren in December, after sending texts to Gasparro. Zimmerman is accused of sending Warren 185 calls, texts, emails, and voicemails over the course of nine days, NBC 6 reported. These included 38 texts, seven voicemails, and 21 calls in just two hours. Police said he threatened Warren and also called the Sheriff’s Sergeant a c*nt, among other words.

He also texted to Warren: “I’ll see you before you realize it.”

Police advised Warren to send a single text asking Zimmerman to stop contacting him or he would contact law enforcement. When he did, Zimmerman texted “No!” and threatened to show up at his home, the report reads. Zimmerman also sent Warren a link to an article where Zimmerman was quoted as saying: “I know how to handle people who **** with me, I have since February of 2012.” February 2012 was the month he killed Trayvon Martin. In the article, Zimmerman was also quoted as saying: “Anyone who f**** with my parents will be fed to an alligator.”

Zimmerman also left voicemails on Warren’s phone that included ticking sounds and tones that increased in frequency and speed. Between December 16 and December 25, 2017, Warren received 55 phone calls, 67 texts, 36 voicemails, and 27 emails from Zimmerman, the report reads.

Acting Sgt. Seiple of Seminole County contacted Zimmerman on January 3, 2018. Zimmerman called her a c*nt on the phone and swore at her for calling him. He said, “You are the f****** blonde c*nt who arrested me on Samantha! … You have been involved with me since the Martin kid!” Zimmerman provided personal details during the call that confirmed his identity, the police report reads. 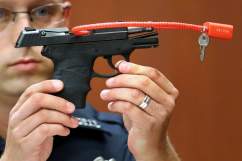 3. Warren Contacted the Police Because He Was Concerned About His Safety, But Prosecutors Determined There Was Not Enough of a Credible Threat for a Felony

GettyDefendant George Zimmerman arrives in the courtroom for closing arguments in his murder trial July 12, 2013.

Warren said he feared for his safety and the safety of his family because of Zimmerman’s threats, along with communications that indicated Zimmerman had information about the location of Warren’s family. The police report requested that felony charges of aggravated stalking be filed against Zimmerman.

However, the state attorney filed a misdemeanor charge instead, stating there was insufficient evidence that Zimmerman made a “credible threat” when he discussed feeding people to an alligator, NBC 6 reported. An official report from the State Attorney mentions that prosecutors believed the alleged crime of “stalking” (not aggravated stalking) could be proven beyond a reasonable doubt at trial.

Seminole Sheriff sought aggravated stalking felony charge against George Zimmerman, but state attorney filed a misdemeanor charge, finding insufficient evidence Zimmerman "made a credible threat" when he told victim "anyone who fuc*s with my parents will be fed to an alligator."

Zimmerman was personally served a summons for his stalking charge on May 3, and was notified that he should appear for an arraignment hearing on May 30 at 9 a.m. You can read the summons here.

According to his LinkedIn profile, Dennis Warren is a retired captain from the Orange County Jail in Orlando, with his last job there being Commander of the Internal Affairs Unit. He’s now a private investigator. Warren was awarded Florida’s Correctional Officer of the Year in 1987, and he owned the largest private prisoner transportation company in Florida, moving more than 32,000 inmates nationwide from 2000 to 2006.

As a private investigator, Warren spends much of his time working for a large Central Florida law firm handling insurance cases. He has also worked as a freelance investigator for production companies, including the one working on Zimmerman’s documentary. Warren has been a private investigator since 2013 and also serves as a Chairman of the Board for the Code Enforcement Board in Seminole County.

5. Warren Oversaw the Bookings of Many High-Profile Bookings, Including Casey Anthony & Lisa Nowak, And Was Interviewed About Them on ‘Larry King Live’

He was the Booking Manager at the Orange county Jail, and his high profile bookings at the time included the NASA astronaut Lisa Nowak, Casey Anthony, and others. He appeared on Larry King Live in 2007 to discuss his high-profile arrests. You can read the transcript of his appearance here.

When discussing Nowak’s arrest with King, Warren talked about when he went into Nowak’s cell to discuss the charges that were going to be filed against her. “(She was) confused, scared, disoriented. She was very surprised…  I’m a captain at the jail. I have been here a long time. And I agree, this is probably one of the more unusual cases that I’m aware of that we’ve had.” 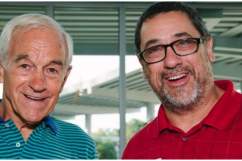 Ron Paul’s Elector Barred From Being Republican Delegate, Accused of Being ‘Antifa’