In case you missed it, you have to watch American Bishop Michael Curry’s sermon at the Royal Wedding between Prince Harry and Meghan Markle. Curry brought down the house, although reactions to his lively, emotional call for love seemed to move people outside the room the most (or maybe it’s just that famous British stiff upper lip that made some of the royals look rather awkward during Curry’s sermon.)

That Curry would give such an animated sermon – in which he spoke extensively about fire and quoted from Rev. Martin Luther King Jr. – is not surprising if you understand his background and philosophy. However, it was unusual for a Royal Wedding. On social media, many people lavished praise on Curry.

The Rev. Michael Curry’s homily was absolutely fantastic. Love is the way. Amen to that!

The Lord was glorified by the bold preaching delivered by Bishop Michael Curry during the Royal Wedding…it was a special ceremony seen by millions!

More inspiring words from Rev Michael Curry at #royalwedding  “We were made by the power of love
That’s why we are here
The source of love is God himself
The source of all of our lives
There is power in love
To help and heal when nothing else can” pic.twitter.com/mTTiaTfMNT

Catching up with Twitter, and the rave reviews people are giving Rev Michael Curry are almost making me wish I’d watched the wedding ?

Some of the faces in the crowd were pretty funny though.

Bishop Michael Curry once gained fame for a sermon referring to “crazy Christians,” and has focused on racial justice.

Curry, who also goes by the name of Michael Bruce Curry, is an American leader of the Episcopal Church who resides in Chicago, Illinois. Although the selection broke with royal tradition, the Archbishop of Canterbury, Justin Welby, who presided over the wedding service, praised Curry on Twitter, writing, “I’m thrilled that Prince Harry and Meghan Markle have asked Bishop Michael Curry to preach at their wedding. @PB_Curry is a brilliant pastor, stunning preacher and someone with a great gift for sharing the good news of Jesus Christ.”

According to Anglican News.org, “The US-based Episcopal Church is the oldest independent Anglican province outside the British Isles. When European travelers first colonized what is now the United States of America, they took with them clergy from European Churches, including the Church of England.”

“This bishop is a tireless advocate for people on the margins,” said Adam Shoemaker, a church rector, to The News-Observer. Curry gave a fiery and passionate sermon that earned some fans on Twitter. “Love is the way,” was his core phrase. “Dr. King was right. We need to discover love. The redemptive power of love. And when we do that, we will make of this old world a new world,” he said during the wedding in what was an unusually dramatic and lengthy sermon for a Royal Wedding.

Prince Harry and Ms. Meghan Markle “have asked that The Most Reverend Michael Bruce Curry, the 27th Presiding Bishop and Primate of The Episcopal Church, give the address at their wedding,” Kensington Palace confirmed in a statement.

“Presiding Bishop Curry, from Chicago Illinois, will travel to Windsor to take part in the Service. He will join The Dean of Windsor, The Rt. Revd. David Conner, who will conduct the Service. The Most Revd. and Rt. Hon. Justin Welby, Archbishop of Canterbury, will officiate as the couple make their marriage vows,” the statement said.

The Most Reverend Michael Bruce Curry said, according to the Kensington Palace statement: “The love that has brought and will bind Prince Harry and Ms. Meghan Markle together has its source and origin in God, and is the key to life and happiness. And so we celebrate and pray for them today.”

Here’s one of Curry’s past well-known sermons:

According to CNN, Michael Bruce Curry is the first black leader of the Episcopal Church in America. He first became known because of a sermon he gave that referred to “crazy Christians.” You can watch a video of that sermon above.

That 2012 sermon came when Curry was bishop in North Carolina and, according to CNN, he “quoted several versions of the Bible characterizing Jesus as someone who was thought to be out of his mind,” and said, “They thought he was crazy! And he was! He is!…And those who would follow in his footsteps, those who would be his disciples, are called and summoned and challenged to be just as crazy as Jesus.”

“An approachable man and a charismatic preacher, he also uses Facebook, Twitter, Vimeo and the diocese’s website to advocate for social justice and racial and gender equality, and to encourage congregations undertaking that work,” The News Observer reported.

You can learn more about Michael Curry here: 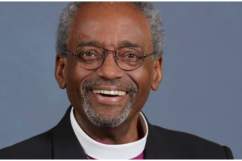