Getty Prince Harry during the 'Walk Of America' launch at Mandarin Oriental Hyde Park on April 11, 2018 in London, England. The Prince will also become a patron of the charity which is the latest expedition from the armed forces charity 'Walking With The Wounded'. This summer, a team of six veterans from the USA and the United Kingdom will walk 1,000 miles from the west to the east coast of America in 14 weeks.

Prince Harry and his bride, Meghan Markle, tie the knot today at St. George’s Chapel at Windsor Castle today. With millions of fans watching, hundreds of questions go through everyone’s minds. There is an age gap between the prince and Markle, so it makes one wonder how old Prince Harry actually is. Harry is 33 years old, while Markle is age 36. He was born on September 15, 1984, while her birth date is August 4, 1981.

When it comes to Prince Harry’s height, being tall runs in his family. Prince Harry is reportedly 6′ 1″, while his brother, Prince William, is actually 6′ 3″. Both of their parents were 5′ 10″ and Markle stands at 5′ 7″.

With that out of the way, let’s get into some fun facts and interesting notes about Prince Harry from over the years. Have a look at them below.

PRINCE HARRY & MEGAN MARKLE’S TITLES: Once the could is husband and wife, the palace has confirmed that, “The Queen has today been pleased to confer a Dukedom on Prince Henry of Wales. His titles will be Duke of Sussex, Earl of Dumbarton and Baron Kilkeel. Prince Harry thus becomes His Royal Highness The Duke of Sussex, and Ms. Meghan Markle on marriage will become Her Royal Highness The Duchess of Sussex.”

ROYAL WEDDING 2018 FACTS: Prince Harry and Meghan Markle are marrying at the St. George’s Chapel at Windsor Castle. It is actually the place where Harry was baptize, on December 21, 1984, at St George’s Chapel, Windsor. The newlyweds reportedly will not share their first kiss inside the church. It is a royal tradition for the couple to make an appearance on the Buckingham Palace balcony after the ceremony has ended and share their first kiss as husband and wife. The couple may not be having their first kiss at Buckingham Palace and may share their kiss on the outside steps of the chapel. Another tradition is for the groom to face away from the bride as she walks the “long walk” down the aisle, to the altar.

All three of the late Princess Diana’s siblings are in attendance of the Royal Wedding, with Diana’s sister, Lady Jane Fellowes, delivering a speech. Some of the celebrity guests who are joining the Royal family on this special day include Victoria and David Beckham, Oprah Winfrey, Amal and George Clooney, James Corden with his wife, and Serena Williams.

PRINCE HARRY’S FAMILY: Prince Harry, like his brother Prince William, is the son of the late Princess Diana and Prince Charles. In place of Meghan Markle’s father, who is in ill health, Prince Charles helps to walk Markle own the aisle at the Royal Wedding. Over the years, there have been rumors that Prince Harry’s father was actually a man name James Hewitt, with whom Princess Diana reportedly had an affair. According to Hewitt, “There really is no possibility whatsoever that I am Harry’s father. I can absolutely assure you that I am not. Admittedly the red hair is similar to mine and people say we look alike. I have never encouraged these comparisons and although I was with Diana for a long time I must state once and for all that I’m not Harry’s father. When I met Diana, he was already a toddler.” 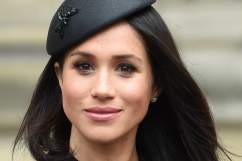 Meghan Markle’s Ex-Husband, Boyfriends and People Who She Dated