To dive a bit deeper into his name, Princess Diana chose the moniker — at least the first part of it.

“I chose William and Harry, but Charles did the rest. He wanted Albert and Arthur, and I said no. Too old,” Princess Diana told author Andrew Morton, for his book, Diana: Her Story, according to PopSugar.

The names Charles, Albert, and David, are all central to the British monarchy. Charles, of course, is Harry’s father’s name. Albert stems from Queen Victoria’s husband, Albert of Saxe-Coburg.

“Queen Victoria’s prince consort had this name before any kings did — then her son, grandson, and two great-grandsons all became king with this name on their birth certificates, one of them with it in first place, even. Yet there has never been a King Albert. The one who could have been, Edward VII’s son Albert Victor, died before he got the crown,” The Week reports.

And finally, David is the patron saint of Wales.

If Harry were to ever become king, he would be King Henry IX, according to Business Insider.

“Harry is currently sixth in line to the throne, and every time William and Kate have a child, he moves back one spot. He is, therefore, very unlikely ever to become king. But if he did, he would likely be known as King Henry IX — though royals can choose any of their multiple names, so Henry Charles Albert David could also go for Charles III, Albert I, or David I,” reports Business Insider.

When Harry and Meghan took their vows, they were expected to each other’s full names. For Harry, he was expected to call his bride, Rachel Meghan Markle, as her given first name is Rachel. When Meghan recited her vows, she used Harry’s nickname, as opposed to Henry Charles Albert David.

You can check this out in the video below.

Meghan Markle didn’t get quite as flustered as her groom’s mother, however. Now that Prince Harry is a married man, he will get a new title. His grandmother, Queen Elizabeth II, bestowed a dukedom upon him. He has officially become the Duke of Sussex, thus making Markle the Duchess of Sussex. 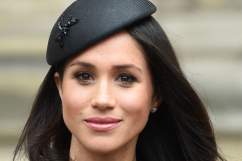 What Is Meghan Markle’s Real Name?

Loading more stories
wpDiscuz
0
0
Would love your thoughts, please comment.x
()
x
| Reply
Prince Harry's real first name is Henry. He has gone by the nickname Harry since he was young.