The Tomb of the Unknown Warrior is the name for a grave at Westminster Abbey, in which an unidentified British soldier, killed during World War I, has been interred.

According to Westminster Abbey’s website, the unidentified remains of a British soldier were returned from France and buried on Armistice Day, November 11, 1920.

“The grave, which contains soil from France, is covered by a slab of black Belgian marble from a quarry near Namur. On it is the following inscription, composed by Herbert Ryle, Dean of Westminster,” the site reads.

BENEATH THIS STONE RESTS THE BODY
OF A BRITISH WARRIOR
UNKNOWN BY NAME OR RANK
BROUGHT FROM FRANCE TO LIE AMONG
THE MOST ILLUSTRIOUS OF THE LAND
AND BURIED HERE ON ARMISTICE DAY
11 NOV: 1920, IN THE PRESENCE OF
HIS MAJESTY KING GEORGE V
HIS MINISTERS OF STATE
THE CHIEFS OF HIS FORCES
AND A VAST CONCOURSE OF THE NATION
THUS ARE COMMEMORATED THE MANY
MULTITUDES WHO DURING THE GREAT
WAR OF 1914-1918 GAVE THE MOST THAT
MAN CAN GIVE LIFE ITSELF
FOR GOD
FOR KING AND COUNTRY
FOR LOVED ONES HOME AND EMPIRE
FOR THE SACRED CAUSE OF JUSTICE AND
THE FREEDOM OF THE WORLD
THEY BURIED HIM AMONG THE KINGS BECAUSE HE
HAD DONE GOOD TOWARD GOD AND TOWARD
HIS HOUSE

The remains of an unidentified French soldier were simultaneously buried at the Arc de Triomphe in Paris, France.

The tradition of a royal bride laying her bouquet at the Tomb of the Unknown Warrior began in 1923, when Elizabeth Bowes-Lyon, the late Queen Mother, laid hers down in tribute to her late brother. The Honorable Fergus Bowes-Lyon, uncle to the United Kingdom’s Queen Elizabeth II, died at age 26 in 1915 at the Battle of Loos, according to the Commonwealth War Graves Commission.

The Tomb of the Unknown Warrior was the only grave in Westminster Abbey not covered by a special carpet for the wedding of Elizabeth II to Prince Philip, the Duke of Edinburgh, according to a report from the BBC. In 2011, following her marriage to Prince William, the bouquet of Catherine, newly-minted Duchess of Cambridge, was placed at the Tomb “by a royal official after the official wedding photographs were completed,” according to the Telegraph. The same report describes the Tomb as “one of the most sacred places in the Abbey,” and says that it’s the only part of the floor on which members of the congregation are not allowed to walk.

“It is thought that the idea to commemorate the unknown war dead of the 1914-18 conflict, which saw a generation perish on Western Front, came from the Rev David Railton who served as a chaplain during the conflict. Legend has it that in 1916, while serving in Armentieres, Rev Railton noticed a grave in the garden with a rough hand-made cross bearing the inscription ‘An unknown British Soldier.’ In 1920, Rev Railton wrote to Herbert Ryle, the Dean of Westminster with the suggestion that all of those who died in the trenches and whose bodies were never be found should be remembered,” according to the Telegraph.

Ms. Meghan Markle is expected to follow tradition. Her bouquet will more than likely be placed on the Tomb of the Unknown Warrior after the wedding photos are taken. 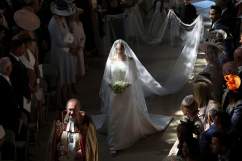 Loading more stories
wpDiscuz
0
0
Would love your thoughts, please comment.x
()
x
| Reply
The Tomb of the Unknown Warrior is the name for a grave at Westminster Abbey, in which an unidentified British soldier, killed during World War I, has been interred.