John Warren is the Republican candidate who forced incumbent Governor Henry McMaster into a runoff race for the gubernatorial primaries in South Carolina, which will be determined on Tuesday evening. A former businessman and combat veteran, Warren emerged as a virtual nobody during the primaries, slowly rising to tie for the Republican bid against McMaster, a longtime career politician.

As a traditional conservative, Warren campaigned upon a platform that primarily focused on the need for new blood in DC. In the days leading off to the runoff election day on Tuesday, polls pitted Warren and McMaster in varying leads, with one poll giving Warren a ten point lead over McMaster, and other polls signaling a smooth victory for McMaster over Warren.

Warren has been endorsed by all of the three other candidates who competed in the Republican primary for governor of South Carolina. Here’s what you need to know.

1. This is His First Time Running for Office, Ever

This gubernatorial campaign marks Warren’s first foray into the political universe. Prior to running for office, Warren has made a career as a successful businessman in the South Carolina region. According to his official site, Warren is the founder and CEO of Lima One Capital, a mortgage finance company.

Lima One Capital has received several awards for its success as a fast growing company, and has over 80 full time employees. Warren is also a combat veteran, having led over 300 combat missions during his service as a decorated Marine in Iraq.

According to Greenville Magazine, Warren has sited his professional experience as the key to his future success in office. He said, “I have led over 300 combat missions. I have actually started a company. We need people that have done things of that nature serving South Carolina.”

2. He Could Care less About Whether Trump Likes Him or not

Despite Trump throwing his support behind McMaster in the weekend leading up to the runoff election, Warren was unconcerned. In conversation with Fox News’ ‘The Newsroom,’ Warren said, “This election is clearly not about President Trump’s record. It’s about Henry McMaster’s, and it’s a record of failure and the people are tired of it.”

He added, “We have so much corruption in our state, a lack of accountability in government and so much incompetence down in Columbia. They want a businessman, they want a conservative and they want a Marine, and that’s why we’re going to be victorious.”

At age 39, Warren is half of his opponent McMaster’s age, who is 71. McMaster was notably the oldest person to hold the office of governor in South Carolina two years ago, at age 69.

According to US News, this age gap has contributed to Warren’s “lightning-speed momentum” in the last few weeks of the primary campaigning, allowing him to overcome the three other candidates who were also in the race by campaigning on his “youthful enthusiasm” and outsider mentality.

“It’s time to change the coach,” he told supporters, via US News.

4. He Aligns With McMaster on Almost Every Issue

The primary distinction between McMaster and Warren can be found in Warren’s belief that the people of South Carolina are tired of “tired of the status quo and the same old, same old from the people who have spent their lives in government.”

Warren has also noted his belief of the extensive corruption taking place at the state level, as seen in his conversation in ‘The Newsroom’ (video above).

5. He Contributed Three Million Dollars to His own Campaign

Of his donation, Warren reportedly said, “My wife and I are going to be making a significant contribution to our campaign because we believe in South Carolina and we don’t want to be beholden also to any of the special-interest groups like some of the other candidates.”

Given that Warren quickly moved into a contending position against the more experienced and well known McMaster, his financial investment seemed to be an effective one. As for McMaster, he raised over four million dollars for his own re-election campaign. 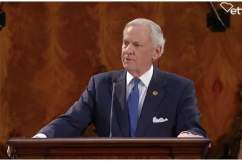