On Thursday, President Trump privately asked advisors what they thought about appointing Utah Senator Mike Lee to the Supreme Court as a replacement for Justice Kennedy, according to The Hill. Earlier in the week, Kennedy announced his plans to retire on July 31, and President Trump immediately set to collecting a list of 25 names of potential replacements, all of whom are staunch conservatives.

According to The Hill, Trump believes Lee would easily be able to pass a Senate confirmation vote, which is necessary for nominees. As for Lee, he recently told reporters that he was still interested in being named to the Supreme Court, should Trump choose to nominate him.

“I started watching Supreme Court arguments for fun when I was 10 years old. So if somebody asked me if I would consider that, I would not say no,” he told reporters, then added, “But the president’s got a decision to make and I trust his ability to make it and make it well.”

Mike Lee is a staunch conservative, and an original Tea Party member. Here’s what you need to know.

1. He’s an Untraditional Pick for a Supreme Court Justice

According to Vox, the standard type of person that is chosen to be a Supreme Court justice is usually a legal scholar or a judge. Lee is neither of those. Rather, he was elected in 2010 as the 16th Senator of Utah, and has remained a senator ever since.

Though Lee is not currently involved in law, his background is filled with it. According to his official government page, Lee graduated from Brigham Young University with a Bachelor’s Degree in Political Science, and was even the Student Body President his senior year.

Lee then went to BYU law school, and proceeded to clerk for several judges and justices. Lee spent several years working with the law firm Sidley & Austin before deciding to make a foray into politics.

2. He Hasn’t Always Been Trump’s Biggest Fan, and Even Suggested the President Should Step Down at One Point

Surprisingly enough, Lee has not been a profound supporter of Trump’s political rise, both prior to Trump’s election and after. When Trump was running for office, Lee actively did not support Trump for a large portion of his campaign, even going on a massive rant about Trump to NewsMaxTV host Steve Malzberg.

Lee continued, “Again I hope I can get over this, because I can’t vote for Hillary. I know there’s no possibility of that. What I am saying is that Donald Trump can still get a lot of votes from a lot of conservatives like me, but I would like some assurances on where he’s going to stand his ground. I’d like some assurances that he’s going to be a vigorous defender for the U.S. Constitution.”

What’s more, in October 2016, Lee said of Trump’s presidency, “I have serious doubts about Trump’s ability to defeat Hillary Clinton. In fact, I don’t think he can.” Lee then went on to suggest that the only way for Trump to salvage his political legacy would have been to step down from the race.

However, by July of 2017, Lee was calling Trump the leader of the “conservative movement.” Lee said, “Anyone who’s playing a role in the process is, by definition, a leader. I think he’s someone who’s come to Washington with an idea of breaking up accumulated power.”

3. He Thinks That Gun Control Doesn’t Actually Have Much to do With Guns

Lee went on to argue that although governments can and should protect individual liberty, this is “first and foremost the job of the people”, and that “the first defense against criminal threats to our persons and our property is ourselves,” which is why he believes in the right of gun ownership.

Given that the 2nd amendment and the anti-abortion movement tend to go hand in hand, it might not be a surprise that Lee is also vehemently pro-life, arguing that “Every individual, regardless of age, health, or condition of dependency, deserves the respect and protection of society.”

On Wednesday, Cruz spoke to Fox News about his belief that Lee was the man for the job. “I think the single best choice that President Trump could make…is Senator Mike Lee. I think that he would be extraordinary,” Cruz said, adding, “Democrats have batted about 1,000 [with their Justices] voting the way they wanted on every single issue. Republicans at best bat five hundred…about half of the nominees Republican presidents have put on the court have turned into train wrecks, into liberal activists.”

“The reason why I think the best choice that President Trump could make is Mike Lee is because I know beyond a shadow of a doubt that Mike Lee would be faithful to the Constitution and the Bill of Rights,” Cruz concluded.

5. His Brother Is Also Being Considered to Replace Justice Kennedy

Talk about sibling rivalry. Both Lee and his brother, Utah Supreme Court Justice Thomas Lee, are on the short list of nominees to replace Justice Kennedy. Though Thomas Lee reportedly declined to comment to a spokesman in Utah, Lee’s substantial legal pedigree likely speaks for itself.

According to the Salt Lake Tribune, Lee had the best chance in 2016 to replace the late Justice Antonin Scalia, in terms of finding a replacement who had a similarly strict interpretation of the Constitution. According to the researchers who published this study, Lee had a 99.4% chance of perfectly fitting “the Scalia mold”.

However, Scalia was eventually replaced by Neil Gorsuch, after a long, drawn out battle by Republicans to prevent OBama from nominating Merrick Garland at the end of his presidency. Now, Thomas Lee is overshadowed by his brother for this replacement, if reports of Trump’s leanings are in fact true. 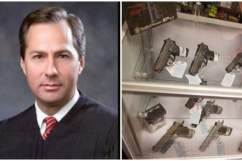 Thomas Hardiman & Gun Control: What Are His Views on the Second Amendment?

Loading more stories
wpDiscuz
0
0
Would love your thoughts, please comment.x
()
x
| Reply
Mike Lee is the current Senator of Utah, a staunch conservative, and reportedly a top pick for Trump to offer up as a replacement to Justice Anthony Kennedy.