Beto O’Rourke (D-TX), Ted Cruz’s Senate challenger in the 2018 and current U.S Representative is open for the Democratic Party to be under new congressional leadership.

In fact, it sounds like O’Rourke think the party needs new leadership. During an interview on ABC Radio’s Powerhouse Politics today (July 25), O’Rourke was asked if he would vote for Senator Chuck Schumer (D-NY) as the Democratic leader should he defeat Crux (R-TX) in the general election. O’Rourke responded flatly: “No.”

He expounded upon that by saying he would listen to Democrats who wanted the position and then make his decision. He said he hasn’t had discussions with Schumer or other Democrats about future leadership of the party.

However, it is rare for a Senate Minority or Majority Leader to serve for only one term in the position. The last Democrat to only spend two years in a Senate leadership role was Scott W. Lucas (1949-1951).

In the same interview, O’Rourke also discussed the movement to abolish ICE, which has gained traction in the Democratic Party in recent weeks. “Abolishing ICE does nothing to resolve any…issues,” O’Rourke said. He referred to the movement as a “slogan” and “bumper sticker” that won’t get to the root cause of the problems. O’Rourke said the real issue is how we treat each other. 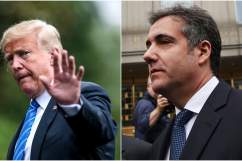