A duck boat on Table Rock Lake, about 18 miles from Branson, Missouri, capsized, leaving dozens of people in the water. Early reports indicated that six people were killed, but the Stone County Sheriff later confirmed that eight people had died. That number has since been increased to 17. It is believed that a storm caused the accident. According to local weather stations, there had been wind gusts of more than 60 mph at the time the boat capsized.

Strong winds can greatly impact water vessels, according to the U.S. Coast Guard.

“According to the most recent Coast Guard accident data, nearly three percent of all recreational boating accidents are directly related to severe weather conditions that can quickly overwhelm smaller craft. Some thunderstorms, for example, create microbursts – intense downdrafts over an area a half-mile to three miles wide capable of producing wind gusts from 60 mph to more than 100 mph. Microbursts can capsize a small boat or blow a passenger overboard,” according to the United States Coast Guard’s Boating Safety.

There is also some scanner audio that suggests that there may have been a tornado in the area, but that has not been confirmed at this time.

“Need a water rescue. Will be north of the show boats. Will be a duck that has capsized. We have approximately 30 individuals in the water,” a dispatcher says in the early scanner audio of the tragedy.

You can listen to that audio below.

Duck boats are designed to both drive on land and to travel in the water. They are very popular amongst tourists. It’s unclear how the wind may have flipped the boat. A line of severe thunderstorms moved through the area about an hour ago, but it’s unclear if that weather system may have impacted the Table Rock Lake area.

The company that is believed to own the duck boat that capsized, “Ride the Ducks,” has not released a statement of any kind.

“Ride through the scenic Ozarks on our amphibian Duck that goes right from land into the river. Climb to the top of the Mountain, discover the history behind some of America’s unique military vehicles then splashdown and cruise Table Rock Lake. Drive the duck a little if you want. Quack along with the captain and the music aboard this 70-minute Ozark adventure,” reads a description on the company’s website. 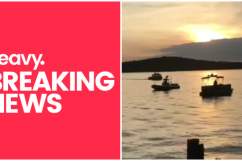 Read More
Breaking News, Missouri, News
A duck boat capsized on Table Rock Lake, sending tourists into the water. Wind is believed to be the cause of the accident.