Ed Schultz, the broadcaster and political commentator who has died at the age of 64, was married twice and left behind six children.

What was his cause of death? How did he die? His stepdaughter told The New York Times Schultz had heart problems, and WDAY-TV reported that he died of natural causes on July 5, 2018. Schultz was a Democratic voice in talk radio after switching parties, and he also appeared on MSNBC and RT.com, a Russian website.

RT confirmed the news in a statement, saying, “We at RT America are sad to announce the passing of Edward Andrew Schultz. Ed Schultz passed quietly early morning on July 5 at his home in Washington, D.C. This announcement comes as a shock to all of us here at RT America.” According to The Washington Post, RT America is “the domestic network of what was once known as Russia Today, a globe-spanning multimedia organization funded by the Russian government.”

Here’s what you need to know about Ed Schultz’s family:

1. His Wife, Wendy, Was Diagnosed With Cancer

In 2012, Ed Schultz revealed on his radio show that his wife, Wendy Schultz, was struggling with ovarian cancer. “It’s been a real jolt to say the least,’ Schultz said to listeners at the time. “It shakes you to your bones. But she’s a tough girl, and she went through surgery yesterday. The doctors feel like they got all of it…but we’ve got a long way to go.”

He also said that the diagnosis had put his family “through the ringer.”

In 2013, Schultz announced that Wendy was cancer free. “It has been a long seven months for my wife, Wendy Schultz, and her battle with ovarian cancer,” read the statement posted by MSNBC. “After major surgery in July, followed by 18 weeks of intense chemotherapy, Wendy had a CT scan on Friday and the news came today (Tuesday) that she is cancer free. I know that she wants to thank all of you who have been so gracious with your prayers and support. And I can tell you my wife, who is not a very public person, through me is telling you that she is deeply touched and appreciates it.” 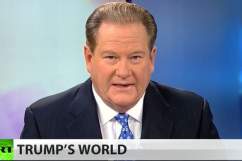 2. Wendy Schultz Is a Psychiatric Nurse & His Mother Died of Alzheimer’s Disease

According to UK Daily Mail, Ed Schultz met Wendy Schultz in the 1990s, and she is a psychiatric nurse.

Schultz said his wife’s cancer had brought the family even closer together.

In his book, Ed Schultz described his mother’s decline as “she struggled with Alzheimer’s disease.” He wrote:

“She slowly drifted away – a woman who had been so sharp, such a vibrant part of my life. During the years I lived in North Dakota, when I went home to see Mom in Norfolk, she would leap out of her chair and embrace me. In her last year, when Mom was in an assisted living facility, Wendy ad I went back to see her. She was eating when we arrived. I touched her shoulder and said, ‘Hi, Mom…’ She looked up at me for a moment. Time stopped. And then she looked back down at her plate and began eating again. Do you know how that feels?”

Before Wendy Schultz, Ed Schultz was married to Maureen Zimmerman, a newscaster. They later divorced. Daily Caller reports the divorce was contentious with Zimmerman once allegedly seeking a protection order against Schultz. His lawyer denied one was granted.

For years, Ed Schultz hosted the syndicated radio program “The Ed Schultz Show.” MSBC reported at the time that Schultz was “the breakthrough talent in an industry dominated by conservative voices. As an avid voice for the middle class, Schultz brings his hard-hitting style to msnbc.”

However, Schultz and the network eventually parted ways. He was also an author of such books as “Killer Politics” (2010) and “Straight Talk from the Heartland” (2004). According to The Tribune, Schultz became his career in Fargo, North Dakota in the early 1980s. He was also a former college football quarterback in Minnesota.

Schultz had looked in good health recently on Facebook. He shared posts of vacations and fishing expeditions in June and May 2018.

In May, Schultz posted a photo showing he was in the Netherlands on a trip with his wife, Wendy.

4. Schultz Said He Became a Democrat Because of His Second Wife, Who Worked in a Homeless Shelter

According to The Washington Post, Ed Schultz “attributed the conversion to his wife, Wendy Noack, a psychiatric nurse who worked in a Fargo homeless shelter and later became his radio producer.”

Don Haney, Schultz’s friend, told the newspaper, “The change was gradual, but Ed really meant it.” According to Biography.com, Schultz said Wendy led him “out of the right-wing darkness” by “introducing him to the homeless people and veterans at the Salvation Army shelter where she worked. With Wendy’s encouragement, Schultz also toured the Dakotas, where he sympathized with the plight of struggling farmers.”

According to Columbia Journalism Review, the couple had their first date at a soup kitchen. “The experience of eating a baloney sandwich while surrounded by downtrodden men whom he was paid to lambast on the air rattled Schultz’s conservative worldview,” the site reports, adding that it led to “soul-searching” by Schultz.

Biography.com reports that Ed and Wendy Schultz had six children. “Their son Dave is a professional golfer. Although a large family, the Schultzes are a tight-knit clan; they hunt, fish and even fly together,” the site reports.