Time Magazine The Emmett Till murder case was re-opened by the government this month due to the "discovery of new information."

The federal government has recently re-opened the infamous Emmett Till case, in which a 14-year-old African-American boy was abducted and murdered for allegedly whistling at a white woman.

According to The New York Times, the case was “quietly revived” because of “the discovery of new information”, though that new information has not yet been disclosed.

Till’s murder (and his ensuing public funeral, in which thousands of people came to view his disfigured body as a representation of the hate crime) came to be a cataclysmic moment for the civil rights movement in the nation at the time. Though the two white men who were accused of murdering Till were eventually acquitted by an all-white jury, the white woman who first accused Till of whistling at her later admitted that she hadn’t told the full truth.

Till was raised by a single mother in Chicago, and was visiting family in Mississippi in the days leading up to his death. Here’s what you need to know.

The Body Of Emmett Till | 100 Photos | TIMEEmmett Till was brutally killed in the summer of 1955. At his funeral, his mother forced the world to reckon with the brutality of American racism. Subscribe to TIME ►► http://po.st/SubscribeTIME In this unprecedented exploration of 100 photographs that shaped the human experience, TIME goes behind each spectacular image to reveal how and why it changed the course of history. Order the book now at the TIME Shop. http://po.st/TIME100Photos Visit the complete multimedia experience at http://100photos.time.com/ Get closer to the world of entertainment and celebrity news as TIME gives you access and insight on the people who make what you watch, read and share. https://www.youtube.com/playlist?list=PL2EFFA5DB900C633F Money helps you learn how to spend and invest your money. Find advice and guidance you can count on from how to negotiate, how to save and everything in between. https://www.youtube.com/playlist?list=PLYOGLpQQfhNKdqS_Wccs94rMHiajrRr4W Find out more about the latest developments in science and technology as TIME’s access brings you to the ideas and people changing our world. https://www.youtube.com/playlist?list=PLYOGLpQQfhNIzsgcwqhT6ctKOfHfyuaL3 Let TIME show you everything you need to know about drones, autonomous cars, smart devices and the latest inventions which are shaping industries and our way of living https://www.youtube.com/playlist?list=PL2862F811BE8F5623 Stay up to date on breaking news from around the world through TIME’s trusted reporting, insight and access https://www.youtube.com/playlist?list=PLYOGLpQQfhNJeIsW3A2d5Bs22Wc3PHma6 CONNECT WITH TIME Web: http://time.com/ Twitter: https://twitter.com/TIME Facebook: https://www.facebook.com/time Google+: https://plus.google.com/+TIME/videos Instagram: https://www.instagram.com/time/?hl=en Magazine: http://time.com/magazine/ Newsletter: time.com/newsletter ABOUT TIME TIME brings unparalleled insight, access and authority to the news. A 24/7 news publication with nearly a century of experience, TIME’s coverage shapes how we understand our world. Subscribe for daily news, interviews, science, technology, politics, health, entertainment, and business updates, as well as exclusive videos from TIME’s Person of the Year, TIME 100 and more created by TIME’s acclaimed writers, producers and editors. The Body Of Emmett Till | 100 Photos | TIME https://www.youtube.com/user/TimeMagazine2016-11-17T18:00:26.000Z

Wright was with Till when he allegedly whistled at a white woman, a supposed act which would then catalyze the series of events that led to his murder. Wright said of his cousin Till that he was always joking around, and might have been trying to get a laugh out his cousins, though the whistle terrified Wright.

According to Chicago Magazine, Wright said of the incident, “[The joke] scared us half to death…a black boy whistling at a white woman? In Mississippi? No.”

Till was at Wright’s house when Roy Bryant and his half brother J.W. Milam came for Till in the middle of the night. He watched them take Till, whose body was later found in the Tallahatchie River.

New revelations in 1955 lynching of 14-year-old Emmett TillAuthor Timothy Tyson discusses his new book "The Blood Of Emmett Till" with "CBS This Morning" co-host Gayle King. The book recounts the brutal 1955 murder of black teen Emett Till in Mississippi. Till was accused of assaulting a white woman, which led to his kidnapping and death.2017-01-31T21:27:08.000Z

According to Biography, Till’s mother Mamie Till had extraordinary success for a black woman in the 1920s and 30s, both with her schooling and her eventual career.

She was the fourth black student ever to graduate from Argo Community High School, a predominantly white school in Chicago, and she was the first black student to make “A” Honor Roll in the school. She eventually worked as a clerk for the Air Force, and was in charge of confidential files.

Mamie Till separated from her husband Louis Till in 1942, and since he was later reported to be executed while serving in Italy for “willful misconduct”, Till was raised singlehandedly by his mother.

3. Till’s Great Uncle, Moses Wright, Was the One Who Fatefully Brought Him Down to Mississippi

Till was based in Chicago, but when his great uncle, Moses Wright, visited Till’s family in Chicago, he offered to bring Till down to Mississippi to visit his family. Though Mamie Till reportedly didn’t want him to go, she gave in and allowed him to make the trip.

Right before Till left with his uncle, Mamie Till gave him his father’s signet ring, which was engraved with his initials “L.T.” After Till’s death, when he was so mutilated that it was impossible to recognize him, it was this ring that allowed Wright to positively identify his nephew.

4. Simeon Wright Wrote a Book to Dispel All of the Alleged Inaccuracies He Found With the Public Understanding of Till’s Murder

Historian on Emmett Till's accuser recanting storyIn 1955, a 21-year-old white woman named Carolyn Bryant claimed a black teenager, Emmett Till, made sexual advances toward her. That claim led to Till's kidnapping and death. Historian Timothy Tyson says the woman has broken her silence for the first time to recant her story. Tyson joins "CBS This Morning" to discuss his new book, "The Blood of Emmett Till," which examines Bryant's claims.2017-01-31T14:18:50.000Z

According to The Washington Post, Wright was “haunted by historical inaccuracies surrounding Till’s death.”

His book, ‘Simeon’s Story: An Eyewitness Account of the Kidnapping of Emmett Till’, aimed to dispel those inaccuracies.

“For every courageous black man willing to speak out against the circumstances we faced,” Simeon Wright wrote in his book, according to The New York Times, “hundreds of white men were willing and able to make sure he paid the ultimate price.”

Wright also wrote, “[After Emmett was murdered], for the first time in my life, I thought about shooting a gun at another person.”

5. Mamie Till Was the One Who Made the Decision to Show Till’s Body in an Open Funeral for Five Days

Till’s body was infamously made available for public viewing after his death, so that the country could see the brutal effects of the hate crime.

Till’s mother reportedly allowed his body for public viewing to “let the world see what has happened, because there is no way I could describe this. And I needed somebody to help me tell what it was like.”

Over 100,000 people came to see Till’s body, and one of the photographs taken of him made Time Magazine’s list of the 100 most influential images of all time. 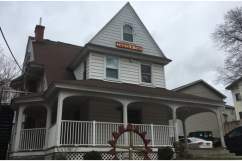 Read More
5 Fast Facts
The Emmett Till murder case has been re-opened by the government due to the discovery of "new information." Till was raised by a single mother, and it was his uncle who brought him to Mississippi on a trip where he would eventually be murdered.