Family members of Faisal Hussain – who was named as the 29-year-old Danforth shooter who gunned down 15 people – have released a statement saying that their “hearts are in pieces” over the mass shooting and framing it as a mental health breakdown.

However, police and Toronto’s Special Investigations Unit have yet to announce a motive, and they say that they have not ruled terrorism in or out. The gunman, clad all in black, killed an aspiring teenage nurse and a 10-year-old girl by unleashing a shooting rampage in a popular restaurant area in Toronto known as Greektown. Thirteen other people were injured.

Conflicting reports emerged about whether the suspect might have allegiance to ISIS. CBS News reported, through a source, that Hussain may have expressed support for ISIS. The Toronto Sun reported that “files being reviewed by police include concern Hussain expressed ‘support’ for a website that was seen as ‘pro-ISIL.'” However, CBC quoted Toronto police as saying they have “no evidence” the mass shooting was “connected to ISIS.”

A screenshot from the Instagram video that reportedly shows Faisal Hussain.

Faisal Hussain, of Toronto, was named as the Danforth shooter by the city’s Special Investigations Unit. “Due to the exceptional circumstances of the tragic incident last night on Danforth Avenue and the public interest in knowing the identity of the man who was involved in the exchange of gunfire with police, the SIU has identified him,” the SIU wrote, before naming the gunman as Faisal Hussain.

Faisal Hussain used a handgun to slew a 10-year-old girl and 18-year-old aspiring nurse Reese Fallon. The 29-year-old Toronto, Canada man died at the scene after an exchange of gunfire with Toronto police. It’s not yet clear whether Hussain was shot by police or committed suicide. Despite his family members’ comments, witnesses have described a chilling scene with a determined and ruthless gunman who was described by one witness as executing a young woman and by another as treating it like a “video game.”

Faisal Hussain’s family – his parents – released a statement that said they were “utterly devastated.” The parents’ names were not given. There has been no mention of a wife or children, although it’s not clear whether Faisal Hussain was married.

In the statement, Faisal Hussain’s family wrote that their son “had severe mental health challenges, struggling with psychosis and depression his entire life.” They said they unsuccessfully tried to get him intervention and added, “we could never imagine that this would be his devastating and destructive end.”

They called the rampage “senseless,” and “incomprehensible.”

“Our hearts are in pieces for the victims and for our city,” the family said. Although some news sites gave Faisal Hussain’s name as Faisal Hussein, SIU spells is Hussain.

#BREAKING: Shooter identified as 29-year-old Faisal Hussain. His family sent out the below statement: @CityNews pic.twitter.com/WHigrHUGpE

The Hussain family had recently undergone several traumas, and claims they didn’t know Faisal had a gun, reports Global News.

“Hussain was the son of Canadian parents of Pakistani origin who have been struggling through major challenges,” the site reports.

“Hussain’s sister died in a car accident and his brother is hospitalized following a stroke…Hussain worked in retail and would accompany his mother to the hospital to visit her infirm son.”

The families of the victims are left to grieve the loss of a promising young woman and a child.

According to CP24, the adult victim, Reese Fallon, was “a recent high school graduate from Toronto’s Malvern Collegiate Institute, and planned to study nursing at McMaster University.” The deceased child has not yet been named.

You can read more about Fallon here.

Fallon’s family said only: “The family is devastated (and) asks that their privacy be respected at this time.”

“We are heartbroken to learn that a recent graduate of the TDSB was among those who tragically passed away as a result of last night’s violence on Danforth,” read the statement. “An engaging student, Reese Fallon graduated from Malvern CI just last month and was highly regarded by staff and loved by her friends.” 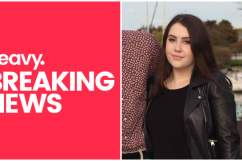 Witness to tonight’s shooting, who was inside Second Cup and saw the shooter pic.twitter.com/keec5lUXQQ

Witnesses gave chilling descriptions of the gunman’s determination and ruthlessness. One witness described how the gunman saw her with a friend through a business window and shot at them.

Andrew Mantzios, a witness, described the shooter as having “this horrible expression on his face” as he fired, seemingly randomly. “And then a lady tried to run and she fell down,” he told Globe and Mail. “He turned around and shot her point blank, two or three times.” The witness said the suspect shot into businesses, including Caffe Demetre, a dessert shop.

Mantzious told the news site that a woman was “executed,” and added that people were “falling all over the place – maybe seven, eight, nine of them.” Mantzious also said: “But the guy … had this look on his face, while I saw his profile, like he was screaming at something and shooting.”

GettyPeople look out the window from a restaurant as Toronto Police afficers stand watch at Danforth St. at the scene of a shooting in Toronto, Ontario, Canada on July 23, 2018.

It’s not the first mass tragedy to strike Toronto. Alek Minassian is accused of ramming a van into pedestrians, killing 10 people, earlier in the year. He had “praised mass shooter Elliot Rodger and referenced a misogynistic online community of angry celibate men in a Facebook message,” reported Telegraph.

Police say it’s too early to say whether terrorism is involved. They said both Sunday and Monday in press conferences that they and SIU were still investigating the motive and were considering all angles.

“I’m keeping everything open. Looking at every single possible motive for this; when you have this many people struck by gunfire, it’s a grave concern,” said Toronto Police Chief Mark Saunders. “I certainly want to find out exactly what it is, so I am not closing any doors or any chapters on this. I certainly don’t want to speculate… I don’t know why he did what he did, and he won’t be able to tell us because he is deceased.”

The police chief was specifically asked whether terrorism was involved, and he did not rule it in or out.

An eyewitness described the gunman as shooting like it was “in a video game.”

“He was very relaxed, it was pretty disturbing,” Lenny Graf told Toronto Star.

The Shooter Still Lived With His Parents & Had No Criminal History, Reports Say

Video that is believed to show the shooter was posted to Instagram in the moments after the rampage, which unfolded around 10 p.m. as families and others gathered for a night out on the popular Danforth restaurant strip. The Instagram user, @ArielAnise, wrote, “WARNING disturbing content @TorontoPolice @CBCToronto Shooting outside our window at Chester and Danforth ? praying for victims.”

You can watch the video above, but be aware that it’s troubling as it shows the gunman open fire.

The Instagram user then deleted her page but not before the video spread on the Internet. Heavy viewed the video on the original page before it was deleted.

Biographical details were coming out on the suspect, and he reportedly still lived with his parents, despite being 29-years-old. They live in the Thorncliffe area of Toronto.

Neighbors of Faisal Hussain spoke to reporter Ginella Massa of City News and said they were “shocked” by the rampage, calling Hussain “humble” and “quiet.”

Although details are still unfolding, one Global News journalist, Travis Dhanraj, reported that Hussain was “previously known to police and had mental health issues.”

Scene of shooting from Danforth and Logan. #breakingnews pic.twitter.com/w8r6nncrUN

However, a Global News Crime reporter, Catherine McDonald, wrote that Hussain had no criminal record. “Police source tells me Faisal Hussain…has no criminal record & was not before the court on any outstanding charges,” she wrote.

Police executed a search warrant at the home where Hussain lived with his parents.

“Police source tells me @TorontoPolice are on the scene and in the process of executing a search warrant at the home of 29-year-old Faisal Hussain who lived in Toronto’s thorncliffe area with his parents,” reported journalist Travis Dhanraj. Thorncliffe is an area in central east Toronto known for its population density and diversity.

The SIU is urging anyone “who may have information about this investigation to contact the lead investigator at 1-800-787-8529.”