This message triggered a harsh late-night all-caps tweet from President Trump: To Iranian President Rouhani: “NEVER, EVER THREATEN THE UNITED STATES AGAIN OR YOU WILL SUFFER CONSEQUENCES THE LIKES OF WHICH FEW THROUGHOUT HISTORY HAVE EVER SUFFERED BEFORE. WE ARE NO LONGER A COUNTRY THAT WILL STAND FOR YOUR DEMENTED WORDS OF VIOLENCE & DEATH. BE CAUTIOUS!

To Iranian President Rouhani: NEVER, EVER THREATEN THE UNITED STATES AGAIN OR YOU WILL SUFFER CONSEQUENCES THE LIKES OF WHICH FEW THROUGHOUT HISTORY HAVE EVER SUFFERED BEFORE. WE ARE NO LONGER A COUNTRY THAT WILL STAND FOR YOUR DEMENTED WORDS OF VIOLENCE & DEATH. BE CAUTIOUS!

The 69-year-old Rouhani is in his second term as president of Iran. He has been a prominent figure in Iranian politics for the majority of his life and has a net worth of approximately $500,000.

When he was first elected, Rouhani was viewed as a more moderate figure who vowed to expand personal freedoms, fight extremist views and be more open to the rest of the world. But Rouhani does not appear to have lived up to many of those promises. Government officials continue to arrest protesters angry over the struggling economy.

1. This Isn’t the First Time Rouhani Has Jabbed at President Trump

President Trump’s argument was that Iran had not abided by the rules of the nuclear deal. He accused them of failing to “meet our expectations in its operation of advanced centrifuges. The Iranian regime has also intimidated international inspectors into not using the full inspection authorities that the agreement calls for.”

In that address, President Trump also stated that Iran is a state sponsor of terror. “Iran is under the control of a fanatical regime that seized power in 1979 and forced a proud people to submit to its extremist rule. This radical regime has raided the wealth of one of the world’s oldest and most vibrant nations, and spread death, destruction, and chaos all around the globe.”
Iran's Hassan Rouhani says Trump speech was full of insults and liesVIDEO: REUTERS2017-10-13T22:08:14.000Z
Hassan Rouhani jabbed back at President Trump in a speech to his own people, by referring to Trump as a dictator. He also warned that Iran would not back down against any nation that threatens them. “Donald trump’s speech was full of falsehoods, unfair insults, lies and fake accusations against the great Iranian nation. The Iranian nation is not a nation that will bow to forceful talking and hateful speeches from a dictator.”

2. Rouhani Was Educated in the Western World but Was Close With an Anti-Western Supreme Leader

GettyTEHRAN, IRAN: Conservative Hassan Rouhani, deputy speaker of the parliament and secretary of Iran’s top security body, the Supreme National Security Council, addresses thousands of pro-regime demonstrators who gathered 14 July 1999 at Tehran University, the main focus of six days of student protests which have shaken Iran’s Islamic regime. Rouhani said the students arrested during the past two days of violent protests will be tried as “counter-revolutionaries”.

Hassan Rouhani has many titles: lawyer, academic, Islamic cleric, diplomat and president. He had one early education in politics, because his family was opposed to the Shah, Mohammad Reza Pahlavi, who supported a pro-Western foreign policy.

Rouhani focused on religion as a young man and studied under Shia scholars at religious seminaries during the 1960s. In 1972, he earned a law degree from the University of Tehran.

Rouhani was a major supporter of Ruhollah Khomeini, the exiled cleric who strongly denounced American influence in Iran. Rouhani joined Khomeini in exile in France in 1977, spending the next two years speaking to student groups in Europe denouncing the Shah. After the Shah was overthrown in 1979 and Khomeini became the first Supreme Leader, Rouhani returned to Iran and held several prominent roles under the new government.

In the 1990s, Rouhani returned to Europe to continue his education. He earned a master’s degree and a Ph.D from Glasgow Caledonian University in Scotland.

Hassan Rouhani did not serve in the military, but became a highly influential military leader in the 1980s. (For context, Iran was at war with Iraq for the majority of the decade). Rouhani’s leadership roles have included:

Rouhani developed relationships with Western leaders during his time on the Supreme National Security Council. As Iran’s chief nuclear negotiator from 2003 to 2005, he agreed to suspend Iran’s Uranian enrichment. His clerical background earned him the nickname “diplomat sheikh” during those negotiations. Rouhani resigned from this post in 2005 after Mahmoud Ahmadinejad was elected president; Rouhani had been a vocal opponent of Ahmadenejad’s.

4. Rouhani Promised Moderation When He Won the Presidency and Quickly Established Relations with the United States

Hassan Rouhani is a member of the Moderation and Development Party in Iran. He became Iran’s 7th president with he won more than 50% of the vote in 2013. He promised a more moderate approach and was open to talks with the West. During a 2013 address at the United Nations, Rouhani stated that “Iran poses absolutely no threat to the world or the region.”

Rouhani quickly followed through on his vow to open dialogue with the United States. Weeks after taking office in 2013, he spoke on the phone with President Obama. It was the first time an Iranian leader had spoken with a U.S. president since 1979, when the Shah was overthrow in the Iranian Revolution.

That conversation was the beginning of a diplomatic relationship that eventually lead to the signing of the nuclear deal. Under that agreement, Iran promised to scale back nuclear research in exchange for the easing of economic sanctions.

In 2014, TIME named Rouhani the 9th Most Influential Person in the world. In that article, he was praised for taking a moderate stance during nuclear negotiations. “On his watch, Iran suspended sensitive nuclear activities as a gesture of goodwill until negotiations were completed… Rouhani’s moderate leadership offers an opportunity that must not be missed: too much is at stake.”

GettyUFA, RUSSIA – JULY 9: In this handout image supplied by Host Photo Agency / RIA Novosti, President of the Russian Federation Vladimir Putin (R) and President of the Islamic Republic of Iran Hassan Rouhani meet during the BRICS/SCO Summits – Russia 2015 on July 09, 2015 in Ufa, Russia.

Rouhani won re-election in 2017, beating the more traditionally conservative populist Ebrahim Raisi. But Iran has been in turmoil because of a struggling economy. And the continued repression seen against protesters calls into question whether Rouhani was serious when he talked about improving personal freedoms in Iran.

During his time in office, little if anything appears to have changed. Journalists and opposition leaders remain in jail. The media is still heavily censored and there are tight restrictions on the Internet.

Iran’s government also kills more people than any other county. According to Amnesty International, more than half of the world’s executions in 2017 occurred in Iran.

The report states that 507 people were put to death in 2017. “501 were men and six were women. At least five juvenile offenders were executed and 31 executions were carried out publicly. The executions were carried out for murder (240); drug trafficking (205); murder and rape 4; robbery 11; “spreading corruption on earth” 2; rape (male on female rape) 16; kidnapping and murder 3;moharebeh (politically motivated) (2); and 19 were for offences that could not be confirmed.”

The economy also remains in turmoil, prompting protests. The value of Iranian currency dropped by half since September 2017. According to the BBC, Iran’s middle class has seen their household budgets drop by 20% over the past decade.

And the situation in Iran is bound to get worse once new sanctions go into effect in August. Sanctions on Iran’s gold, steel, coal, cars, and currency will be reimposed. Iran will also be prohibited from buying U.S. dollars. 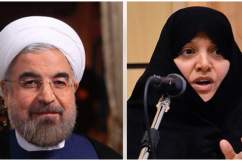