The captain of the World War II era ‘duck’ tour boat that sank in Table Rock Lake in Branson, Missouri during a storm killing 17 people, including nine from one family, has been named.

Known as ‘Captain Scott,’ Kenneth Scott McKee, 51, survived the tragic sinking of the amphibious vehicle run by Ride The Ducks Branson. The 33-foot craft designed for land and sea could not survive the near-60 knot winds and four-foot seas as it struggled to stay right and afloat.

A survivor said McKee said life jackets were not necessary.

A number of state and federal agencies are investigating the swamping. It’s not yet clear if there will be criminal charges brought and against whom. Ride the Ducks Branson, which offered to pay medical bills for the injured, removed information about McKee from its website.

1. McKee Captained the Boat on the Water, But on Land it Was Driven by Another Employee Who Was One of the 17 Drowned

The swamping of the duck boat in waters that looked more sea than lake claimed the lives of 17 people but nine of them were from one family. McKee was at the helm.

When the boat went down and passengers were in the water, where rolling waves reached heights of four feet, McKee presumably did as well. But he survived the sinking.

McKee was reported to have suffered minor injuries but it’s not clear what they were and if he was treated.

A group of mourners pause for a moment of prayer at Ride The Ducks Tours on July 20, 2018 in Branson, Missouri. Hundreds of mourners stopped by the location to pay their respects to the victims after a duck boat capsized in Table Rock Lake in a thunderstorm on Thursday killing 17.

McKee captained the boat in the lake, but it’s been reported that while the amphibious craft was on land, Bob Williams, a 73-year-old and a former chauffeur was the driver. Williams was listed as one of the dead. He was described in a law enforcement report as a boat passenger.

2. Known as ‘Captain Scott,’ McKee, a Longtime Mariner, Reportedly Told Passengers Life Jackets Need Not Be Worn During the Ride

One of the two survivors from the Coleman family of 11 that boarded the boat that day, Tia Coleman told Fox59 news on the phone that McKee said life jackets were unnecessary, “So nobody grabbed them as we listened to the captain as he told us to stay seated.”

A now-deleted profile on McKee on Ride the Ducks Branson website read, according to reports, that he was a Missourian, a longtime boat captain and had been with the duck tour company for nearly 16 years.

Another question is, with his experience, and given the weather forecast, why he would have taken the boat into possibly dangerous conditions.

3. Investigators Are Hoping the Boat’s Camera Survived Being Underwater as Footage Will Show What Occurred. Ride the Ducks Says it’s Cooperating With Investigators

It’s been reported investigators hope the on-board camera footage has survived. The boat, raised by the Coast Guard Monday, sat in 80 feet of water for several days. It’s not at all certain yet that there will be any viable video.

Authorities are also looking at Ride the Ducks company protocols for inclement weather. The weather forecast included an advisory for a strong thunderstorm for the area, so investigators will surely be questioning McKee and others on how and why the decision was made to set sail.

4. A Former NTSB Official Says Duck Boats ‘Are Not Seaworthy’ as Touring Crafts & Should be Banned

A Ride The Ducks World War II DUKW boat is seen at Ride The Ducks on July 20, 2018 in Branson, Missouri. Hundreds of mourners stopped by the location to pay their respects to the victims after a duck boat capsized in Table Rock Lake in a thunderstorm .

“The boats are not designed for the type of use that they are being employed for. They’re not seaworthy for this type of use,” Hall told ABC.

“That’s essentially why one of the safest ways to do it is to ban it because you have being brought on these boats children, who are not making informed decisions for themselves and adults bringing them on without adequate warnings.”

In 1999, 13 out of 21 passengers on a duck boat in Hot Springs, Arkansas, were drowned when the craft capsized. The NTSB report found the probable cause of the “uncontrolled flooding and sinking of the Miss Majestic was the failure of Land and Lakes Tours, Inc., to adequately repair and maintain the DUKW. Contributing to the sinking was a flaw in the design of DUKWs as converted for passenger service, that is, the lack of adequate reserve buoyancy that would have allowed the vehicle to remain afloat in a flooded condition. Contributing to the unsafe condition of the Miss Majestic was the lack of adequate oversight by the Coast Guard. Contributing to the high loss of life was a continuous canopy roof that entrapped passengers within the sinking vehicle.”

Boaters are seen on Table Rock Lake on July 20, 2018 in Branson, Missouri. teh day after the swamping of a duck boat where 17 drowned, 9 from one family.

In other words, the boats were not built to be tour boats. DUKW boats were built to ferry soldiers and armaments during World War II. The Branson boat was built in 1944. It was last checked out and passed muster this past winter. 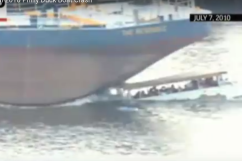 5. On TripAdvisor, ‘Ride the Ducks of Branson’ is a Popular Attraction & Rated Highly. ‘Captain Scott’ Appears in 17 Reviews & All Are Glowing

The consensus on the popular travel website TripAdvisor is McKee was knowledgeable, entertaining and his jokes ranged from “not half bad” to “hilarious.” None of the reviewers provided commentary on his skills as a boat captain rather each spoke to his skill as a storyteller. McKee was reviewed as being a good tour guide who knows his material and apparently enjoyed the gig because the reviews go back nearly a decade.

“Captain Scott is awesome. He is hilarious. He made the ride so much fun. When our children (ages 4, 6, 8, 10) drove the duck he talked to them and asked what they wanted to be when they grow up and what kind of car they want. He was also very informative about the origin of the duck (DUKW), as well as other area attractions. It was a wonderful experience, and we will definitely do it again when we are in Branson,” wrote BrandyST of Kansas back in 2011.

A duck boat passenger from Illinois said, My daughter hasn’t stopped talking about Captain Scott. We took our Duck tour the day after we arrived in Branson for our vacation. Captain Scott was absolutely wonderful. There was never a dull moment in our tour. Captain Scott’s sense of humor was infectious. The best part for our 4 year old was driving the Duck when we got into the water. She talked about it nonstop our entire time in Branson. We will definitely be taking the tour again.”

On a TripAdvisor review from 2015, a passenger posted a review of the “Branson Duck Boat With a Storytelling Captain.”

“Taking a ride on a ducw (duck) with Capt Scott was a load of fun. Capt Scott was full of information about the sites in Branson and his jokes weren’t half bad. This trip is a must do when visiting Branson.”