Wedding guests may think they’re seeing double: two sets of identical twins are getting married in Michigan. Krissie Bevier and Zack Lewan tied the knot August 3. Their twins, Kassie Bevier and Nick Lewan, followed suit the next day. All four celebrated together during a joint reception on August 4.

The odds of having identical twins is reportedly 1 in 285. So the chances of twin brothers falling in love with a set of twin sisters may be too small to even compute. And not only are these two couples getting married on the same weekend, they also plan to all live together.

Kassie Bevier and Nick Lewan got the ball rolling after meeting in a psychology class in 2014. The professor asked the class whether anyone was a twin. Kassie and Nick both raised their hands.

The pair began getting to know each other after that, and exchanged numbers. Nick told WILX-TV that he encouraged his brother Zack to look up Krissie on Facebook. That’s how Zack and Krissie began communicating with each other.

Kassie told local newspaper Jackson Citizen Patriot that for their first date, she invited Nick to attend a church service with her. They both brought their siblings along. And both pairs have been inseparable ever since.

2. Nick and Zack Lewan Made a Plan to Propose to Kassie and Krissie On the Same Day

Nick and Zack Lewan told the Jackson Citizen Patriot that they did not originally plan to pop the question at the same time. But then the families, parents included, planned a trip to the Henry Ford Museum in Dearborn, Michigan in February 2017. Both Nick and Zack thought the timing was just too good to pass up.

The Lewan twins walked around for nearly two hours with the rings burning holes in their pockets. The perfect moment came as the Beviers and Lewans sat in an old-fashioned vehicle for a picture. Kassie and Krissie were both old to close their eyes. When they opened their eyes, Nick and Zack were both holding engagement rings.

3. The Lewan and Bevier Twins Are Sharing a Home and a Honeymoon

Nick and Zack Lewan and Krissie and Kassie Bevier say they have been with their respective twins for everything. Kassie said in an interview that the vast majority of their dates turn into double dates. They have always lived with each other and hope to always live close by.

For now, “close by” literally means the twins will have nothing but a wall separating them. After the weddings, the couples will live together in a two-bedroom apartment.

They are even sharing part of their honeymoons. Nick and Kassie, and Krissie and Zack, will get their alone time at a family’s beach house in Florida. The couples will meet up for part of the trip at Disney World.

4. Both Kassie and Krissie Bevier Are Working Toward Doctoral Degrees at the University of Michigan

In addition to adding “Mrs.” to their names, Kassie and Krissie are both working to earn the title of “Doctor” as well. The identical sisters are both studying physical therapy at the University of Michigan.

According to Krissie’s Facebook page, the pair began their Ph.D work in 2016. They will graduate with their doctorates in 2019.

While they plan to live together after their weddings, Kassie and Krissie say it was important for them to have separate ceremonies. They also had separate bridal showers.

5. Nick Lewan is Working Toward a Master’s Degree While Zack Lewan Works in the Energy Field

According to his LinkedIn profile, Zack Lewan earned a bachelor’s degree in Natural Resources Management at Grand Valley State University. He currently works for DTE Energy. His profile states that his professional goal is to “make a positive impact on the environment.”

That psychology class where Nick Lewan met Kassie seemed to set the course for him professionally as well. His Facebook page states he earned a bachelor’s degree in psychology from Grand Valley State. He also has a passion for music. His profile also states that he is a music producer for Aurawake, a group that creates electronic dance songs.

Nick Lewan is also furthering his education. He is a graduate student at Oakland University. According to the Jackson Citizen Patriot, Nick is working toward a master’s degree in mental health counseling. In December 2017, he posted an adorable message to Kassie Bevier: “And just like that, my first semester of Grad school is done. Holy cow, what a ride. Thank you SO MUCH Kassie Bevier for your love and support, especially when I feel like I can’t go on. Love you so very much!!” 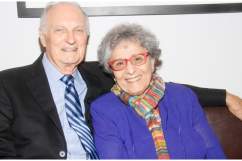