Getty "Real Housewives of New York" star Luann de Lesseps is being sued by her ex-husband and two children.

One of the “Real Housewives of New York” stars Countess Luann de Lesseps is being sued by her ex-husband and two children over a claim that she didn’t “keep up her end of the divorce deal” that she signed in 2009, according to TMZ.

De Lessep’s first ex-husband, Alexandre de Lesseps, along with the two children he shared with de Lesseps, Noel and Victoria, are suing de Lesseps for never having followed through with creating the trust for both kids that was a part of the divorce agreement. According to TMZ, the court documents reveal that de Lesseps purchased a $3.1 million dollar home in Sag Harbor after the divorce, but was supposed to create a trust that entitled the children to half of the house.

TMZ reports that de Lesseps is now trying to sell the Sag Harbor house and use the money to purchase a home in upstate New York, giving none of the cut to her children. She has not yet given a public statement in response to the lawsuit.

Luann de Lesseps has two kids, is a Countess, and has been married three times. Here’s what you need to know about her family.

Following De Lessep’s arrest in Palm Beach in 2017, a source reportedly told Page Six that her ex-husband wanted her to drop his last name. A source told Page Six, “He told her she is ruining the family name and should drop it if she’s continuing to act like this . . . He is watching from abroad and is totally embarrassed.”

Alexandre de Lesseps is a Count and a descendant of Ferdinand de Lesseps. In 2012, his estimated net worth was $50 million dollars. He was married to de Lesseps for sixteen years until they divorced in 2009.

A current junior in college, Noel de Lesseps is an artist, designer, musician and photographer. He has a website that displays his various artwork, and he also uses his Instagram to advertise his sketches.

Currently, he is enrolled at the Maryland Institute of College of Art.

3. Victoria de Lesseps Is a Model on the Rise & an Artist Like Her Brother

Victoria de Lesseps has over 12,000 followers on Instagram, which she uses to curate both her personal and professional life. The 23-year-old has already posed for some big name brands, including Moschino in V Magazine.

Of her daughter’s photoshot, de Lesseps took the opportunity to brag about her daughter, posting the photo to Instagram and said, “So proud of my daughter @victoriadelesseps! You look absolutely stunning! ? #proudmama”

In 2017, Victoria de Lesseps was arrested for a DWI in the Hamptons. According to the Daily Mail, she was released the following morning without bail.

4. De Lessep Was Only Married to Her Second Husband For Seven Months

De Lessep married businessman Tom D’Agostino on New Year’s Eve in 2016, and the two divorced in the following August. D’Agostino’s lawyer confirmed in a statement that he had been the one to file for divorce, though the reason was never disclosed and the two have remained publicly amicable.

In an interview with People Magazine, de Lessep further explained her short-lived relationship with D’Agostino.

She said of what she described as the final straw that led to their divorce, “Tom went out and he called up an old girlfriend and they met up with a group of people. And I didn’t know about it — I found out about it the next day in the press. That for me was like, the final straw. I was like, ‘I can’t do this anymore.’ ”

As of July 2018, multiple sources confirmed to People Magazine that de Lesseps was dating her agent, Richard Super. The source told People that Super was filing for divorce before they were introduced, though he was still in the process of getting divorced when they got together.

According to People, one source said of de Lessep’s latest relationship, “Their chemistry was instant. He’s very aggressive and she goes toe-to-toe with him. You can tell they’re having a lot of fun together,” says the second source, who adds that, “they’re very hot and heavy together.” 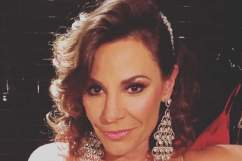 Read More
5 Fast Facts
"Real Housewives of New York" Luann De Lessep's first husband and two children are suing her over failing to keep up her end of the divorce deal she made in 2009.