Maude Gorman renounced her Miss Plymouth County 2018 win and dropped out of the Miss Massachusetts Pagaent following a skit in the pageant that made light of the #MeToo movement.

While I’m grateful for the opportunities that @missamerica creates for young women, I am also internally conflicted; as the #metoo movement was mocked on stage during the final competition of Miss Massachusetts. As both a survivor, and advocate for victims rights and sexual violence on a whole, I refuse to stand idly by and simply “let this go.”

Gorman has been an outspoken activist and pageant contestant since 2015.

1. Gorman Gave Up Her Crown After a Controversial Skit in the Miss Massachusetts Pageant

Today, I officially resigned from the title of Miss Plymouth County 2018. While I’m grateful for the opportunities that @missamerica creates for young women, I am also internally conflicted; as the #metoo movement was mocked on stage during the final competition of Miss Massachusetts. As both a survivor, and advocate for victims rights and sexual violence on a whole, I refuse to stand idly by and simply “let this go”. Instead, I will stand up for every individual who has ever had the courage to speak out; and for every person who felt liberated by the #metoo movement. I will not allow ANYONE to take away that empowerment and liberation, or make it anything less than what it is: AMAZING. #metoo #missplymouthcounty #nomore #rainn #surviveandthrive

In video obtained by the Observer, the organization commented on the current controversy surrounding swimwear in beauty competitions.

A woman kneeling on a chair said, “We may have very well seen the last ever swimsuit competition on stage. It’s very upsetting. And I’m trying to understand, God, why it happened?”

The spotlight turned to a person dressed to look like God. “Me too, Amy,” the person said, with a sign reading #MeToo lifted firmly in the air.

The stunt elicited cheers from some of the crowd and stunned murmurs from others. Gorman wasn’t alone in her admonishment of the skit.

Kenneth Livingston, a Miss America volunteer in attendance for the skit, told the Observer: “I understand that some people are frustrated with the removal of the swimsuit because it holds so much history with the organization, but you know, I don’t really understand why they think that being progressive is a negative thing.”

Gorman added: “Personally, I can’t see myself being a part of the Miss America organization.”

2. In the 2015 Miss World America Pageant, Gorman Spoke About Her Own History With Abuse & the Culture of Victim Blaming

Sometimes doing the right thing, is doing the hard thing. For every survivor who has ever had the courage to speak out; this is for you. Tune into @nbc10boston at 11 PM to hear my exclusive interview about giving up my crown with @missamerica. #survivorandthriver #takeastand #mao #missplymouthcounty #nomore #metoo #everyvoicematters #minetoo #takeastand

In March 2015, when Gorman was 21, she won the Miss Massachusetts World America pageant. She promised to use her crown for good. “I think society blames victims. I’m trying to remove that blame. My goal is to be that light at the end of the tunnel for those who feel stuck in the darkness,” she told the Boston Globe.

Gorman fulfilled that promise at the Miss World America pageant later that year, when she used her three-minute speech to discuss the hardships and turmoil she had faced in her teenage years.

When Gorman was 13, she was raped by three men. Gorman said that she and a friend were leaving a park at night when three young, drunk men walked up to them. Her friend got away but the men caught her as she ran in the other direction.

“You see these stories on the news, but you never think it’s going to happen to you. My decision was that I was going to keep it a secret.” Gorman didn’t tell her friend that night and kept the events to herself for three years. She said she proceeded to suffer from depression and anxiety and had trouble sleeping.

It’s media day at Six Flags New England and I’m so grateful to be a VIP ? being here is almost as sweet as this cone ? #missplymouthcounty #mao #sixflagsnewengland #mediaday #allthefrozentreats #yum

After the rape, Gorman struggled in school. She dropped out of Hingham High School in her first week at the school after identifying one of the young men who raped her. From there, she transferred high schools five times by her sophomore year, including Notre Dame Academy

Although she didn’t find success at Notre Dame Academy, she found the courage to tell her mother about the rape after taking a morality class.

Gorman’s parents enrolled her in an online school and she started attending therapy. Though her mental health improved, she gained weight while being on anti-depressants, which hurt her self-confidence.

She got into shape and, after her sister’s encouragement, she tried her hand at local pageants, in hopes that she would regain self-confidence. She did.

Gorman detailed her road to recovery following her Miss Massachusetts World win in a YouTube video titled “More than just a victim.”

4. Gorman Is Enlisted in the U.S. Coast Guard Auxiliary & Is a Competitive Obstacle Course Racer

Gorman graduated from Stonehill College with a degree in communication and media studies in 2017, according to her LinkedIn page. A few months after graduating, Gorman enlisted in the U.S. Coast Guard Auxiliary, a branch of the Coast Guard that helps assist efforts in all capacities besides military and law enforcement engagement.

She also worked as a presenter for Big Review TV, before it shutdown in May.

Not only did Gorman get in shape for pageants, but she started competing in grueling obstacle courses. According to a post on Seven Seas Roasting, Gorman finished first in an 8-mile obstacle course even after splitting her knee open with a mile left to go.

“Racing helps me show myself just how strong I am and why it’s so important to push yourself outside your comfort zone,” she said.

In May, Gorman finished second in a 50-mile race. Reflecting on her accomplishment, she said: “If there is anything I’ve learned through my experiences in life, it is to love yourself and be proud of every step in accomplishing your goals.”

5. She Gave the Commencement Speech at Her Alma Mater in 2017

The online high school she attended, Christa McAuliffe Online School of Arts & Sciences, invited her to deliver the commencement address in 2017, the same year she graduated college.

“Before CMA, I was actually a high school dropout, so to be a college graduate, to even get into college, was something that I never thought would happen,” Gorman said. She went on to offer words of encouragement in her lengthy, inspiring speech: 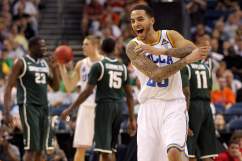