Prince Louis will be christened today at The Chapel Royal, St. James’s Palace, in London. Ahead of the royal baby’s christening, Kensington Palace revealed the child’s godparents. The Duke and Duchess of Cambridge have chosen three godmothers and three godfathers who will all hold a special place in the life of their youngest child.

Interestingly, the Cambridges did not choose any of their siblings as godparents for Louis.

Get to know Prince Louis’ godparents below:

The Cutsem brothers have been friends of Princes William and Harry for many, many years.

Nicholas van Cutsem grew up living at Anmer Hall. His brother, William van Cutsem, is one of Prince George‘s godparents.

Nicholas and his wife, Alice Hadden-Paton, were on-hand at both William and Harry’s weddings. The couple’s daughter, Grace van Cutsem, made headlines for covering her ears on the balcony of Buckingham Palace after William and Kate’s royal wedding. The couple’s other daughter, Florence, was a bridesmaid in Prince Harry and Meghan Markle’s wedding back in May.

Guy Pelly’s mom, Lady Carolyn Herbert, was good friends with Prince William’s mom, the late Princess Diana. The two boys grew up together and maintained a close friendship since childhood. According to The Sun, Pelly actually planned William’s bachelor party before his 2011 nuptials.

Pelly has a degree in management and “ran a string of London nightclubs including Royal-favourite Mahiki in Kensington as well as Public, Whisky Mist and Tonteria,” according to The Sun.

Just about everyone thought that Pelly was going to be one of Prince George’s godparents, and many royal watchers were surprised that he wasn’t. Alas, he’s now getting a royal godchild of his own.

Harry Aubrey-Fletcher is the youngest son of the Lord Lieutenant of Buckinghamshire, Sir Henry. Aubrey-Fletcher and Prince William have also been friends for several years, meeting in prep school before both attending Eaton.

“Harry has always had a close relationship with the two Princes. While his father’s position as Lord Lieutenant of Buckinghamshire ensures a closeness with the Royal Family, Harry made headlines back in 2013 for playfully tugging on Prince William’s ear during the 2013 Cheltenham Festival,” The Sun reports.

Lady Laura Meade is married to William’s close friend, James Meade. Her father, the Earl of Romney, is good friends with Prince Charles.

According to Hello! Magazine, James Meade “delivered the ‘joint best man’s speech’ with Thomas van Straubenzee at William and Kate’s wedding reception in 2011.”

The Meades were in attendance at Prince Harry and Meghan Markle’s May wedding. The photo of Laura Meade above was taken that day.

Hannah Carter attended Marlborough College along with Kate. She is married to Robert Carter, the brother of Sophie Carter, another pal of Middleton’s.

The Cambridges and the Carters have been friends for several years. In fact, the Duke and Duchess of Cambridge attended the wedding of Hannah and Robert Carter back in 2012.

According to People Magazine, the Carters live in Norfolk, not too far from Anmer Hall, where Will and Kate began their lives as a married couple.

Lucy Middleton is the cousin of Kate Middleton. Kate’s father, Michael Middleton, is her uncle. Lucy’s brother, Adam Middleton, is one of Princess Charlotte’s godparents. 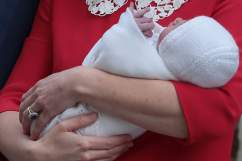 Loading more stories
wpDiscuz
0
0
Would love your thoughts, please comment.x
()
x
| Reply
Prince Louis will have six godparents, according to Kensington Palace. Here are their names a little bit of information about them.