Robert “Bob” Williams was the first victim identified in the “Ride the Ducks” tragedy at Table Rock Lake, near Branson, Missouri. According to CNN, Williams was the driver of the boat. He was 73 years old.

“He’d talk to anybody. He made an effect on many lives. He would give up his life for somebody. That’s the kind of man Robert was, is,” his widow, Judy Williams, told CNN via phone.

The popular tourist duck boat capsized and then sank with 31 people onboard, including children, on July 19, 2018. High winds from a severe thunderstorm caused rough waters, and waves crashed into the boat, flooding it. The Stone County Sheriff has confirmed that 17 people died in the tragedy. Divers worked into the darkness, looking for missing people in the ink-black water, and, by July 20, they announced that they had accounted for all passengers.

1. He Was Described as a ‘Humble’ Man & Was Married to His Wife for More Than 30 Years

Williams’ grandson, Victor Richardson, spoke to CNN about his grandfather.

“He was a God-fearing man; he was very humble. He was the calmest spirit you could ever meet,” Richardson said.

Williams and his wife, Judy, had been married for more than 30 years. They lived together in Branson.

Williams graduated from Ullman High School and went on to study ministry at International Bible School. According to his Facebook page, he previously served as associate Pastor at The King’s Cathedral.

2. He Was a Brand Partner at UnCorked Wellness

According to his Twitter page, Williams was a brand Partner at Uncorked Wellness, where he “[encouraged and] empowered people to live in wellness and achieve prosperity.”

“Uncorked products are intended to provide clean, powerful blends of premium ingredients that will release you into greater levels of freedom and wellbeing. We are motivated to help people achieve greater levels of financial freedom through our brand partner structure. We proudly give to Agape International Missions who is helping to fight human trafficking and continue to bring freedom to the most vulnerable,” reads a description on the company’s website.

3. The Victims Died From Drowning After Severe Weather Caused the Duck to Sink

Still a very active scene. Very dark besides the police lights in this area pic.twitter.com/KlRsrtWsMb

“Major Wind causes major incident on Table Rock Lake, Branson Ride the Ducks Capsized 30 people in the water,” the scanner audio caption on Broadcastify said. The National Transportation Safety Board is now investigating along with the U.S. Coast Guard.

Authorities called off the search around midnight, with five people still missing, and children among the dead. However, the bodies of two of the missing were then found. Authorities then changed the missing count and said four people remained missing. They later said that all people were now accounted for. Of those in the hospital, at least three are under age 18. The dead range in age from 1 to 70, Stone County Sheriff Doug Rader revealed.

Rader said in a news conference that the victims perished from drowning. Seven other people were taken to the hospital; two of the wounded are in critical condition, according to a local hospital. The boat carried 29 tourists and 2 crew members.

“This is going to be an all night and into tomorrow, we’re still going to be working on this,” the sheriff said. One dive team was in the water as the sheriff spoke late in the evening hours of July 19, 2018, and another dive team was on the way. Family members should go to Branson City Hall for information, he said. “I believe it was caused by the weather,” the sheriff added of the tragedy. “It capsized and sank…The duck is still in the water… it sank.”

The owner, Jim Pattison Jr., told CNN the waters were calm when the duck went out, and the storm hit as it came back. “We’re absolutely devastated,” he said.

The City of Branson confirmed that there was an incident. “We are aware of an incident that happened tonight on Table Rock Lake, in Stone County. While the incident did not occur in Branson, we are hoping and praying for all involved. All questions should be directed to the Missouri Highway Patrol or the Stone County Sheriff’s Dpt.,” the city wrote on Twitter on the evening of July 19, 2018.

We are aware of an incident that happened tonight on Table Rock Lake, in Stone County. While the incident did not occur in Branson, we are hoping and praying for all involved. All questions should be directed to the Missouri Highway Patrol or the Stone County Sheriff’s Dpt.

Very sad to hear about this horrible accident – prayers for all those involved and the first responders who are assisting. https://t.co/PQ56zagc0s

Southern Stone Fire also reported on Twitter, “*Boat Dock Emergency/Branson Belle Dock* reported 20+ occupants. Full Response from multiple agencies responding. 7:12pm.” The page then clarified: “crews are on scene and assessing the incident. This incident does not involve the Branson Belle. This is the staging area only.”

4. People on the Nearby Branson Belle Boat Helped With Rescues

A sheriff’s deputy working as security on the nearby Branson Belle boat was immediately in the water, rescuing people, the sheriff said. “It’s going to be a challenging night,” he added.

Authorities are classifying the tragedy as a “mass casualty incident.”

The boat is reportedly underwater and can’t be seen from the surface. It carried 31 people, authorities said, and appears to have flipped over as a line of thunderstorms hit the area.

8 confirmed fatalities from a Ride the Ducks boat sinking pic.twitter.com/vAmh5KcOpG

People on the nearby Branson Belle helped with the rescue.

One local news report described the boat as a “Ride the Ducks” boat, a popular tourist attraction in Branson. Southern Stone Fire, which is the lead agency responding to the scene, wrote earlier on, “Crews from multiple agencies are on scene of an MCI Mass Casualty Incident ‘tourist type boat involved’ this is on Table Rock Lake, Stone County, Branson Missouri. Taney County assisting. Several patients transported to area hospital. Divers on scene. Staging at Branson Belle. However the Branson Belle is not involved. More info to follow.”

The company posted a statement on its website that read: “We are deeply saddened by the tragic accident that occurred at Ride The Ducks Branson. This incident has deeply affected all of us. Words cannot convey how profoundly our hearts are breaking.We will continue to do all we can to assist the families who were involved and the authorities as they continue with the search and rescue. The safety of our guests and employees is our number one priority. Ride the Ducks will be closed for business while we support the investigation, and to allow time to grieve for the families and the community. Thank you for your support, and we ask that your thoughts and prayers be with the families during this time.”

5. The Amphibian Duck Boats Travel From Land to Water

The boat is a major tourist attraction in Branson.

According to Fox 5, “Fox 5 received reports of possible casualties at the ‘Ride the Ducks’ boat on Table Rock.” The television station added, “Multiple agencies began working just after 7pm this evening to rescue twenty or more occupants were reportedly thrown into the lake when the boat capsized.”

The website for Ride the Ducks reads, “Ride through the scenic Ozarks on our amphibian Duck that goes right from land into the river. Climb to the top of the Mountain, discover the history behind some of America’s unique military vehicles then cruise Table Rock Lake. Quack along with the captain and the music aboard this 70-minute Ozark adventure.”

According to CNN, Ripley Entertainment, “the parent company of Ride the Ducks Branson, said it recently acquired the vessel involved in the incident.” Winds gusted up to 63 miles per hour, CNN reported. 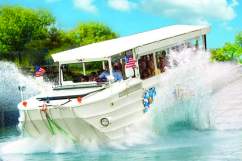 ‘Ride the Ducks’ Branson: 5 Fast Facts You Need to Know