Iranian president Hassan Rouhani has been a prominent and influential figure in Iranian politics and foreign policy for more than four decades. As president, he helped broker the nuclear deal with the Obama administration. He has a far more contentious relationship with the Trump administration and on July 22nd threatened the “mother of all wars” against the United States over sanctions.

Despite all of this attention on Rouhani, the person closest to him has remained shielded from the spotlight. His wife, Sahebeh Rouhani, has stayed far away from her husband’s political life. During his presidential campaign, Iranian journalists did not even know her name.

1. The Rouhani Marriage was Arranged When Sahebeh was a Child

Sahebeh’s marriage to Hassan Rouhani in 1968 was arranged by their parents. She was 14 at the time, and he was 20. They are cousins. Hassan reportedly told the Iranian Students’ News Agency in 2013 that he “wasn’t very reluctant” when his father and mother insisted on the marriage.

Iranian laws governing marriage have changed multiple times over the past several decades. In the 1930s, it became illegal to marry a girl under the age of 13. The punishment for doing so was up to two years behind bars. The courts also had to grant permission for teens under age 15 to be married.

But in 1982, the code was changed to lower the minimum marriage age. Girls as young as 9 years old can be married with permission from a court judge. The legal age for boys to be married is 15.

2. Sahebeh Was Criticized in 2014 for Throwing a “Lavish Party”

What do we know about Iran's mysterious First Lady, Sahebeh Rouhani? http://t.co/RRwAIvKSyy

The First Lady apparently knows how to throw a good party, and not all Iranians are happy about it. In 2014, she reportedly hosted an all-women dinner in northern Tehran, at the palace of the former monarch (who was deposed in 1979). The party was held to mark Women’s Day.

But according to Reuters, parliamentary leaders in Iran signed a petition criticizing the president for his wife’s party. The petition read, “Can one preach austerity and financial sacrifice and yet throw a lavish party on the public coffers?”

President Rouhani issued an official statement in response. Reuters reports the statement read: “It is most shocking and regrettable that even a pure innocent gathering cannot escape an orchestrated chorus of gossip, slander and politically-motivated lies filling the air. All Islamic proscriptions were observed in this event … women turned out in traditional folk dress … only a few little girls capered and rejoiced.”

Sahebeh and Hassan Rouhani reportedly raised five children. Little is know about them, including their names.

Their elder son died in 1992, reportedly by suicide. But it wasn’t until 2013 that an alleged suicide note became public. Exiled Iranian dissident Ali Reza Nuri published the note in the London al-Sharq al-Awsat newspaper. According to the note, Hassan’s son killed himself to protest the political regime in Iran and his father’s close affiliation with the Supreme Leader.

“I hate your government, your lies, your corruption, your religion, your double acts and your hypocrisy. I am ashamed to live in such environment where I’m forced to lie to my friends each day, telling them that my father isn’t part of all of this. Telling them my father loves this nation, whereas I believe this to be not true. It makes me sick seeing you, my father, kiss the hand of Khamenei.”

Hassan Rouhani barely mentioned his wife during his presidential campaign in 2013. She apparently was not included on his official biography during the election either. All that the campaign revealed was that Sahebeh is a housewife and that she had had given birth to five children.

There are a few blogs and other websites that claim Sahebeh is involved in charity work and that she participated in the opening of several kindergarten schools in Iran. But no official confirmation of this can be found.

5. Even Mahmoud Ahmadinejad’s Wife Made the Occasional Public Appearance

GettyIranian President Mahmoud Ahmadinejad waves after casting his ballot as his wife Azam Farahi looks on at a polling station for the parliamentary election run-off in Tehran on May 4, 2012 to decide 65 seats still outstanding in its 290-member legislature.

It’s unclear why Sahebeh has stayed away from the public eye for so many years. Iranian wives are rarely seen in public, but they do emerge from time to time.

Former Iranian president Mahmoud Ahmadinejad was rarely seen with his wife Azam Farahi, But she did make a few public appearances. In the picture above, the pair were seen casting their ballots in a 2012 parliamentary election. She was in full burqa.

Farahi also gave at least two public speeches while her husband was in office. One speech was in front of a forum for the wives of world leaders during a United Nations meeting in Rome in 2009, and the other at a state dinner in 2010. 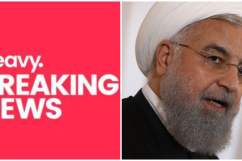 Hassan Rouhani Net Worth: 5 Fast Facts You Need to Know

Read More
5 Fast Facts, Breaking News, Politics
The wife of Iranian President Hassan Rouhani, Sahebeh, is rarely seen in public but was rebuked in 2014 for reportedly throwing a lavish party.