The charges against adult film star Stormy Daniels have been dropped, according to her attorney. Michael Avenatti shared the news on Twitter.

I am pleased to report that the charges against my client @stormydaniels have been dismissed in their entirety (below motion was just granted). I want to thank Joe Gibson & his colleagues at the prosecutors ofc for their professionalism starting with our first call early this am. pic.twitter.com/xHPSWsyqM2

Daniels, whose real name is Stephanie Clifford, was arrested overnight while performing at Sirens Gentlemen’s Club in Columbus, Ohio. Two other performers were all arrested. Daniels posted a $6,000 bond and was released from jail around 6AM Thursday. ABC affiliate WSYX was there as Daniels left jail. She went straight to the car and did not comment.

Columbus Police: Arrests Were Part of an Ongoing Investigation

Columbus police say the undercover officers were at Sirens as part of a long-term investigation into allegations of human trafficking and prostitution. According to the press release, officers have been investigating possible illegal activity through “various adult entertainment clubs throughout the city.”

The other two performers arrested have been identified as Miranda Panda and Brittany Walters. Both are from the central Ohio area.

View this document on Scribd
We obtained the case document from the Franklin County Municipal Court. According to the document, Daniels is facing three misdemeanor counts of “ILLEGALLY OPERATING SEXUALLY ORIENTED BUSINESS – EMPLOYEE KNOWINGLY TOUCH ANY PATRON.” We spoke with a deputy clerk at the courthouse. He confirmed that Daniels was expected to appear in the courtroom at 9AM Friday and that at this point it is open to the public.

My client @StormyDaniels will issue a plea of “Not Guilty” to the three misdemeanor charges.

Daniels’ lawyer, Michael Avenatti, initially tweeted that Daniels was arrested for allowing a patron of the club to touch her in a “non sexual manner.” But court documents have drastically different details.

According to the arrest report, cited by local CBS affiliate 10TV, undercover officers witnessed Daniels touching members of the audience with her bare breasts. She then allegedly touched one of the female undercover cops, by holding the officer’s face between her breasts. The report also states that Daniels touched another officer’s buttocks. Police say two additional strippers were also arrested at Sirens for touching. Physical contact between a performing stripper and a patron is illegal in Ohio, according to the 2007 Community Defense Act. 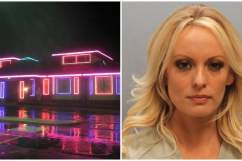