What is Thomas Hardiman’s religion? The federal judge, who is under consideration for a spot on the U.S. Supreme Court, is Roman Catholic.

In fact, three of the four finalists for the position are also Catholic, and the Supreme Court already tilts majority Catholic. All elements of Hardiman’s bio, including his religion, are under scrutiny as President Donald Trump prepares to unveil his choice for Anthony Kennedy’s replacement on the court. Trump is expected to announce his pick on July 9, 2018. The selection will be closely watched as some believe Roe v. Wade hangs in the balance due to Kennedy’s long role as a centrist, swing vote.

In the end, Trump picked another Catholic as nominee: Brett Kavanaugh.

Here’s what you need to know about Thomas Hardiman’s religion:

Hardiman Was Raised in an Irish-Catholic Family in Massachusetts

Hardiman was born in Winchester, Massachusetts but raised in Waltham, a blue-collar town near Boston. He “grew up in a working-class, Irish Catholic family outside Boston. His family had a cab business,” reports Above the Law.

According to the National Catholic Reporter, Hardiman attended a public high school growing up but “then attended two Catholic schools — Notre Dame University and Georgetown University’s law school.” He married his wife in a Catholic Church.

Patch reports that Hardiman’s father, Bob, ran Waltham Central Square Taxi. Hardiman “drove a cab and worked as a dispatcher at his dad’s company,” the site reports, although that was only for a brief time when he was in college. The family is Irish-Catholic, Patch also reported. Hardiman’s dad also goes by the name Robert Hardiman.

In One of His Best-Known Cases, Hardiman Sided With an Order of Catholic Nuns

GettyMadeline Runya of Louisana State University at Alexandria (C) takes a selfie with Sister Cecilia of the Little Sisters of the Poor in Baltimore before the start of the 44th annual March for Life January 27, 2017 in Washington, DC.

Although the case wasn’t on abortion specifically, some point to a Hardiman ruling involving the Little Sisters of the Poor as a possible sign of his inclinations on Roe.

The Hill reports that the case involved the “so-called ‘birth control mandate’ in Obamacare, that required organizations to pay for plans that offer contraception.” A religious group named the Little Sisters of the Poor “claimed the law violated its religious freedom.” According to FiveThirtyEight, Hardiman allowed the Little Sisters of the Poor, who are Catholic nuns, “to join the Trump administration in a case involving expanded exemptions from the Affordable Care Act’s contraception mandate.”

However, the site ranks Hardiman as more moderate than other finalists.

National Catholic Reporter adds these religious-oriented Hardiman cases into the debate: “…in a case where an evangelical family complained that its religious liberty was hindered when the family’s kindergarten-age child was prevented from reading from the Bible during show-and-tell, Hardiman ruled in favor of the family. And in a case where a child was prevented by public school officials from handing out invitations to a party at her church, Hardiman sided against the school district.”

GettyThe U.S. Supreme Court is pictured June 27, 2018 in Washington, DC. Justice Anthony Kennedy has served on the Supreme Court since 1988.

According to NPR, the Supreme Court is already majority Catholic with six of the nine justices adhering to that religion (although one of those, Neil Gorsuch, also attended an Episcopal Church.) Hardiman was the second choice when Trump chose Gorsuch to Antonin Scalia’s seat on the court.

The other three justices are Jewish. Marci Hamilton, a professor at the University of Pennsylvania, told NPR the heavy tilt toward Catholics may partly derive from conservatives’ views on abortion as “the Catholic vote can be relatively predictable on abortion.”

Senate Judiciary Committee hearingAmy Barrett’s children Vivian and Emmy sit on either side of her.

Hardiman is not alone on the finalist list. Brett Kavanaugh and Amy Coney Barrett are also Catholic. Michigan judge Raymond Kethledge, however, is evangelical.

Coney Barrett, whom The New York Times has reported belongs to a controversial Christian covenant community known as the People of Praise, has received the most scrutiny over her religion, with a Democratic Senator causing controversy by raising concern over whether the “dogma” lives within her during her last nomination hearing. Some regarded that as an unconstitutional religious test for the court. 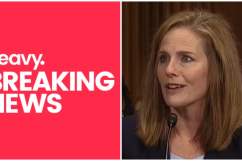 Read More
Breaking News, Catholic, Religion, Supreme Court
What is Thomas Hardiman's religion? The federal judge is Roman Catholic as are most on the U.S. Supreme Court.