Getty Abdul El-Sayed's daughter, Emmalee, was named after the Arabic word for 'hope.'

Abdul El-Sayed is a progressive Democrat currently running in the Michigan primary for Governor, to be determined August 7. El-Sayed is widely considered to be the underdog in the primary, competing with former state Senator Gretchen Whitmer.

El-Sayed has been backed by fellow progressive politicians Bernie Sanders and Alexandria Ocasio-Cortez, as well as other notable celebrities like Shailene Woodley.

El-Sayed is an Egyptian-American muslim whose Father was born in Egypt. Here’s what you need to know about his family.

1. His Father Is Egyptian-Born, & Now Works as a ‘High-Ranking’ Auto Engineer in Michigan

El-Sayed’s father, Mohamed El-Sayed is an auto engineer, according to The Guardian, and he even worked on the first automobile that was optimized using computers rather than manually.

When asked about the potential danger of his son moving into politics as a muslim man, he said, “Are we scared about him? If he goes out and fights injustice, even if he gives his life for that, as long as he’s trying to do the right thing and fight injustice and bring justice to somebody’s life – we’re all going to die one day.” He added, “To die for a cause is better than to die in your bed.”

2. His Stepmother’s Family History in Michigan Goes Back as Far as the Civil War Era

El-Sayed’s step-mother, Jacqueline El-Sayed, has roots that trace as far back in American history as the Civil War era.

Jacqueline El-Sayed is as optimistic about her stepson as her husband is. To The Guardian, she said,  “He won’t do it alone, but he can change politics. I think he’s already doing it. He goes up north and sits down with people that look like his grandpa, and they don’t know that. But then they have this conversation, and this is the first Muslim person they’ve ever met.”

She continued, “People are seeing someone for the first time, they’re not seeing a cartoon, they’re seeing a real person.”

3. His Wife, Sarah Jukaku, Went to College With Him at the University of Michigan

El-Sayed’s wife, Sarah Jukaku, was a peer of his at the University of Michigan. When Jakuku was a freshman and El-Sayed was a junior, he proposed to her. Of the proposal, Jukaku said to Michigan Daily, “When he proposed to me, I was a freshman,” she said. “I was young, and one of the things he said was, ‘We’re still growing, now we can grow together.”

Jukaku and El-Sayed then went on to go through a two year-long courtship process that involves spending time with one another (though not living together) as well as with their families. Of the process, El-Sayed said, “It’s a time to get to know each other more personally. It gives you time to finish up whatever you need to figure out.”

4. He & His Wife Had Their First Child Together Last Year

El-Sayed and Jukaku had their first child together this year, though not much is known about the baby. However, El-Sayed has posted several baby-related posts to Facebook, like the one above.

In a Twitter threat on November 27, 2017, El-Sayed announced that their daughter, Emmalee, had been born. El-Sayed tweeted, “Her name means ‘my hope.’ True to her name, she was born with one fist up – Wonder Woman style”

He added in a subsequent tweet, I want for Emmalee what every parent wants for their child – the opportunity for her best life….But I know that there are barriers she faces as a Muslim ethnically half Indian, half Egyptian and entirely American girl. And there are so many more barriers that children face across our state that, thankfully, she will never know.”

He finished the thread by tweeting a picture of Emmalee’s feet, adding, “For her, for them, we work. Onward.”

5. El-Sayed Currently Lives With His Wife, His Child, and His In-Laws in the Shelby Township

El-Sayed currently lives with his wife’s parents, as well as his wife and child. He has cited his daughter Emmalee’s profound calming effect on him in the last year, in spite of frequent death threats and constant trolling and rumor-mongering in the context of his religion.

To Detroit Free Press, El-Sayed said,  “She does two things for me: her smile can take away all the stress and she is a reminder every day of what I’m working for is the world I want her to grow up in —  is a world that should not matter who she is. I can’t express that to a little kid, but some day, I hope to tell her how much she meant to me in a moment that was really hard.” 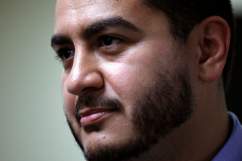 Read More
5 Fast Facts
Follow Heavy ↓
Abdul El-Sayed is a progressive Democrat running for office for the first time, with a background in healthcare policy. He is an Egyptian-American Muslim.