The body of the Queen of Soul will lay in repose for the public to view, honor and mourn, over the course of three days in Detroit.

Aretha Franklin died of pancreatic cancer at age 76 on Aug. 16.

Her body will lie in honor at New Bethel Baptist Church and at the Charles H. Wright Museum of African American History before her Aug. 31 funeral.

On Aug. 30, the civil rights figure and close friend of the Rev. Martin Luther King Jr among myriad other influential civil rights leaders, will lie in repose at the church where she grew up and first recorded music, New Bethel Baptist where her father, Rev. C.L. Franklin was pastor for decades. The public viewing at New Bethel will be held from 12 noon until 4 p.m.

The following day, Franklin’s funeral, her “home-going,” will be held at Greater Grace Temple, the City of David, which seats more than 4,000. The funeral, slated for 10 a.m. will be private with family, friends and invited guests including dignitaries and celebrities. Heavy will livestream the funeral. It’s reported that the Rev. Jasper Williams Jr. of Atlanta will deliver the eulogy.

The Detroit News reported Williams is a “charismatic minister known for his masterful weaving of the teachings of the Bible with social issues was also the eulogist at the funeral of Franklin’s father, the Rev. C.L. Franklin, when he died in 1984. His eulogy of Franklin, titled “A Good Soldier,” documented his many contributions to the civil rights movement.”

Her burial will be held at Woodlawn Cemetery.

Greater Grace Temple pastor, Bishop Charles H. Ellis III, said in a statement emailed to Heavy that while Franklin was beloved by the world, “we as as Detroiters called her our own.”

“…the world mourns one of the most prolific and iconic voices ever to grace the entertainment stage. Ms. Aretha is a musical genius who extended her her gifts beyond the music industry. Her spiritual conviction caused her to give God glory for her many gifts and talents. Her religious roots were deep enough for her to be most generous to many churches and pastors. Her influence was brought enough to open doors of opportunity to hundreds of musical artist. Her love was sincere enough to look beyond our faults…”

In 1946, the New Bethel Baptist Church congregation of 400 led by her father the church pastor, met inside a Detroit bowling alley but within a few years, C.L. Franklin would not only grow the church but by 1951, it had a home.

At age 14, Aretha Franklin, who along with her sisters and father sang in the church choir, recorded an album of spirituals called ‘Songs of Faith.’

Renowned for his sermons which beginning in the 1950s were broadcast on radio, Franklin was dubbed the “Million Dollar Voice.”

New Bethel also became a center of the civil rights movement in the 1960s. As the chairman of the Detroit Council of Human Rights Franklin asked city officials to approvea 1963 march that is now known as the Detroit Walk to Freedom. In a city where more than a quarter of residents were African-American, most lived in sub-standard housing. Franklin’s “Declaration of Detroit” exposed housing and living conditions and brought the Rev. Dr. Martin Luther King Jr to the march which drew more than 120,000, then the largest civil rights demonstration in the nation.

The Westboro Baptist Church has threatened to protest Franklin’s funeral. 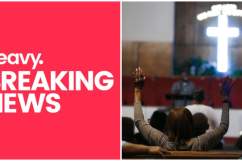 Read More
Celebrities
wpDiscuz
0
0
Would love your thoughts, please comment.x
()
x
| Reply
The body of 'Queen of Soul ' Aretha Franklin will lay in repose for public viewing Aug. 28 to Aug 30. in Detroit. Franklin was 76 when she died of pancreatic cancer.