Looking for an updated California fire smoke forecast map? Many people are seeking that information as air quality remains a concern with wildfires raging out west.

The National Weather Service’s Sacramento, California office has been posting what it calls “smoke model loops” on Facebook that forecast where the smoke plumes from the fires are headed. “We’re getting good feedback that the HRRR-Smoke model loops we’ve been posting are useful to many of you. We’ll try to post them each morning so you can plan your day,” the Weather Service wrote on August 7, 2018.

According to Weather.com, the wildfires in California and elsewhere are also sending smoke plumes throughout much of the United States.

#MendocinoComplex wildfire now the largest in California history. This image shows the fire perimeter overlaid across the SF bay area for scale. pic.twitter.com/paA5zLohpc

“Geo-Color snapshot at 7:47 am PDT reveals #smoke blanketing the vast majority of central and northern California this morning. Additionally, low clouds are covering the coast and Salinas Valley,” the National Weather Service Bay Area wrote on August 7, 2018, providing this map:

Here is the latest air quality forecast from the NWS:

The air quality advisory for Mendocino County for August 7 and 8 can be found here. It reads in part:

“August 7, 2018 12:00 PM: The smoke and haze from the River and Ranch Fires are currently impacting selected areas of eastern Mendocino and all of Lake Counties. Currently air monitors show particulate matter concentrations in the “Good” to “Moderate” range for most of the County. Inland communities and surrounding areas may experience episodes of “Unhealthy for Sensitive Groups” air quality. These include Hopland, Ukiah, Calpella, Redwood Valley, Potter Valley, Willits, and Covelo. Portions of Clearlake and all of the north shore are under an “Unhealthy” air quality alert due to heavy smoke conditions. All other areas of Lake County are forecast to have “Moderate” to “Unhealthy” conditions depending on the wind and fire conditions.”

For comparison purposes, here’s the smoke forecast model that was posted on August 6, 2018:

Latest HRRR experimental smoke model shows that the near-surface smoke is generally expected to remain to the east of the Bay Area today. Can't rule out some low-level smoke, though, in parts of Napa and Sonoma Counties, especially overnight and early Tuesday. #CAwx pic.twitter.com/lVIhv5w4Zd

“…Excessive heat and air quality concerns will persist for much of the
Western U.S. as well as across the Northeast and Southeast U.S….” the NWS wrote on August 7, 2018.

Wildfire Smoke Is Reaching Much of the United States

This isn't stratus this morning looking west from the @LickObservatory, it's smoke. #CAwx pic.twitter.com/dcAMDwShCG

On August 6, 2018, NOAA wrote about smoke in western and central north America: “Large wildfires from central and northern California into northern British Columbia continue to burn and emit thick smoke, contributing to an expansive area of varying density smoke reaching from the Pacific coast eastward as far as Lake Superior and Hudson Bay and from the southwestern Northwest Territory to Guadalupe Island 150 miles offshore of Baja California.”

The update continued: “Moderate density as observed across much of western Canada, the Pacific Coast states, the Snake River Valley, the Great Basin, Utah, Wyoming, Colorado, and the northern Great Plains. A separate area of remnant moderate density smoke was observed over southern Manitoba and northern Minnesota. The thickest smoke exists across much of California, Oregon, eastern Washington, northern Nevada, northern Utah, southern Wyoming, northern Colorado, and southwestern Nebraska. Much of the smoke east of 120 West and in Canada is moving off toward the east, while smoke across western California is moving south and smoke across northern California and Oregon is mainly moving north. Pyrocumulonimbus clouds were observed emanating from fires in northern Arizona, central Utah, southern California, northern California, and north-central Washington state.”

You can see additional maps of the different California wildfires here: 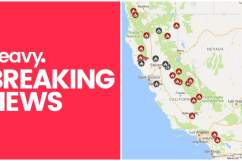