Getty California wildfires are still raging the countryside, and as firefighters continue to battle the blaze, thousands of people are displaced from their homes. Here's how you can help.

California is still being ravaged by massive wildfires that have killed eight people and displaced thousands more. The Carr Fire alone burned through more than 121,000 acres by late Wednesday and is already the sixth biggest inferno in state history, according to the Sacramento Bee.

As firefighters continue to battle the Carr Fire blaze, the Ferguson Fire has forced the closure of Yosemite National Park for the first time in 20 years, according to Today. “Authorities fear more fires will erupt as soaring temperatures create very dry conditions on the ground,” Today reports.

I would like everyone to stop and take a look at what the firefighters in California are facing right now. I have so much respect for wild land firefighters. An instructor during the fire academy told me “those wild land guys are crazy. Y’all have nothing on them” #CarrFire pic.twitter.com/gj9NGj57Yp

Jairus Ayeta has been confirmed as the seventh death in the deadly Carr Fire ravaging California, according to ABC 7 News. Ayeta worked as an apprentice lineman for Pacific Gas and Electric, and the company claims he was doing restoration work in Shasta County when a vehicle accident occurred. Among the other six victims were a great-grandmother and two children. 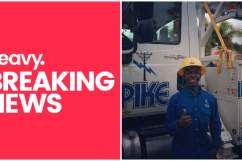 Businesses and organizations across the country are banding together to raise money for the victims and people displaced by the fires, including a little girl named Lila Pratt, who started her own lemonade stand and has raised over two thousand dollars to help those in need.

Reminder: 9am lila will be on California park dr in Chico accepting donations to get supply's for those displaced by the #CarrFire please come out and show support for our neighbors in need! #LilasLemonAID pic.twitter.com/qKGaWlEDXx

Here are other charities and fundraisers accepting donations for victims of the California wildfires:

GoFundMe has published a list of verified campaigns supporting individual families whose homes were destroyed in the fire. The company also teamed up with Tri Counties Bank to establish a general fund benefiting victims across Shasta County.

The Red Cross has opened multiple shelters and is hosting more than 1,000 people who have fled their homes, according to the organization. Those wishing to donate to the Red Cross can do so by texting REDCROSS to 90999 to make a $10 donation.

The Salvation Army has dispatched emergency teams to the Carr area to “serve evacuees and first responders.” They have teams on the ground in Auburn, Roseville, Eureka, Redding and Santa Rosa. You can donate directly to the wildfire relief fund here.

Lot's of love to @GuyFieri, his team, and all the other volunteers, donors, and partners, who are helping people in need right now in California. Donate to The Salvation Army of Northern California #CarrFire relief efforts at https://t.co/YuzIxYrGJj. #DoingTheMostGood pic.twitter.com/Qeil2Cae0f

The United Way of Northern California has established a Shasta County Fire Relief Fund. To donate, text CARRFIRE to 91999 or visit the organization’s website.

The Haven Humane Society is raising money on Facebook to support its efforts to rescue, evacuate and house animals displaced by the fires. Those in the area can also donate dog and cat crates, food, and water bowls.

Facebook has activated its Crisis Response feature for those in Shasta County. Victims can use the feature to post individual requests for aid, and those looking to help can also offer their services.

The Shasta Regional Community Foundation is a tax-exempt charitable organization that helps cover areas of Northern California that have already lost thousands of homes in the wildfires. They have set up a disaster relief fund for those affected in the region.

An entire city in Northern California, Redding, was evacuated last night as the #CarrFire doubled and swept through the western part of town.

2 firefighters have died.
65 homes destroyed.
The fire is 3% contained.

The temperature today in Redding will top 110 degrees. pic.twitter.com/i1OHQLsR26

Altocumulus clouds above the California wild fires.
(? via randoh12 on reddit) pic.twitter.com/tRQHRYeNW2

Read More
California, Carr Fire
Follow Heavy ↓
California wildfires are still raging the countryside, and as firefighters continue to battle the blaze, thousands of people are displaced from their homes. Here's how you can help.