Charles “Chuck” Larson was the best friend of Arizona Senator John McCain. The two were classmates at the Naval Academy and remained close until Larson’s death in 2014. Now, the two will rest side by side. McCain requested before his death that he be buried in the plot next to Larson’s at the United States Naval Academy Cemetery in Annapolis, Maryland.

1. Chuck Larson and John McCain Were Opposites at the Naval Academy But Became Best Friends and Roommates

Chuck Larson was born November 20, 1936 in Sioux Falls, South Dakota. But he spent the majority of his childhood in Omaha, Nebraska. His mother was a teacher and his father worked for a telephone company. Larson moved to Annapolis when he decided to become a member of the U.S. Naval Academy graduating class of 1958.

According to his obituary, Larson and John McCain were roommates for two years while they both attended flight school. USA Today reports that the two were known as the “odd couple” while at school. Larson was the well-behaved, straight-A student. McCain, on the other hand, earned the nickname “McNasty” for his rebellious antics and performed poorly in the classroom. McCain has said he looked up to Larson, and reportedly asked for Larson’s help during his first presidential run. Larson reportedly was a member of McCain’s foreign policy defense team during his bid for the GOP nomination in 2000.

Larson passed away on July 26, 2014. His son-in-law, Commander Wes Huey, confirmed Larson died from pneumonia after battling leukemia for two years. Larson was survived by his wife of 52 years, Sarah “Sally” Craig Larson. The two had three daughters: Sigrid Larson, Erica Larson and Kirsten Datko, as well as seven grandchildren.

2. Larson Switched His Focus From Aviation to Submarines and Became the Second-Youngest Admiral in U.S. History

Chuck Larson trained alongside John McCain as a pilot, flying off aircraft carriers. He flew attack jets in the late 1950s, but soon made the decision to switch his focus and joined the nuclear submarine service. The Washington Post reports Larson served as skipper of the nuclear attack submarine Halibut from 1973 until 1976. The submarine was used to spy on the Soviet Union, and successfully tapped an underwater communication line in the west Pacific. It also obtained sensitive equipment from Soviet Union vessels.

Larson’s obituary states that he served on two ballistic missile submarines and three attack submarines during his Navy career. He also spent time in Washington, D.C. as a White House fellow under President Lyndon B. Johnson. He was the first naval officer to ever be asked to serve as a White House fellow. He followed that with service to President Richard Nixon as a naval aide.

In 1979, Larson made the record books when he was promoted to Admiral. At age 43, he was the second-youngest person in U.S. history to become an admiral.

His most senior military command came in 1991. He served as commander-in-chief of the U.S. Pacific Command in Hawaii. In that position, he was responsible for overseeing 350,000 military personnel serving in more than 40 countries. Larson’s became a four-star admiral over the course of his four-decade long career. His awards included the Defense Distinguished Service Medal, the Bronze Star, sen Navy Distinguished Service Medals, and three Legion of Merit awards.

3. Larson Twice Served as Superintendent of the U.S. Naval Academy

U.S. NavyJune 4, 1998. Secretary of the Navy Dalton presents the Distinguished Service Medal to outgoing Superintendent of the U.S. Naval Academy, Adm. Charles R. Larson during Change of Command ceremonies at the Academy.

Admiral Chuck Larson was picked to lead the U.S. Naval Academy as the superintendent in 1983. He stayed in that role until 1986, not knowing at the time that he would soon return for a second run at the job. Larson was asked to come back in 1994, amid a cheating scandal.

The Naval Academy needed an overhaul. Larson became the first four-star admiral to lead the academy. According to the Baltimore Sun, Larson told officials in 1994, “My goals are very, very simple. No. 1: to develop character. No. 2: to prove the worth of the service academies to the people of the United States.”

Larson tightened the rules at the Naval Academy. Midshipmen were more restricted in when they were allowed to leave campus or wear civilian clothing. He also revamped the curriculum to put more of a focus on character-building and ethics. His friend John McCain said Larson brought the academy “back from a deep malaise.” Larson retired in 1998.

4. Larson Became a Democrat When He Was Asked to Run as Lieutenant Governor of Maryland Alongside a Member of the Kennedy Family

CSPANAdmiral Charles ‘Chuck’ Larson ran for Lieutenant Governor of Maryland as a Democrat in 2002.

According to his son-in-law Commander Wes Huey, Chuck Larson was a lifelong Republican. That’s why he was surprised when he was asked to join the Democratic ticket for governor of Maryland in 2002. Kathleen Kennedy Townsend, the daughter of Robert Kennedy, was the lieutenant governor at the time. She asked Larson to become her running mate in the 2002 election. According to a 2002 article in the Washington Post, Larson and Townsend served together on the University System of Maryland’s Board of Regents.

The decision reportedly surprised many of his friends and former Navy colleagues, because he had never shown any interest in pursuing politics. His second-in-command at the Naval Academy, Admiral Steve Chadwick, told the Post, “I never pictured him as a politician, and I don’t see him as anyone’s lieutenant. That is going to be a different role for him.”

Larson changed his political affiliation and became a Democrat in order to join the ticket. But he and Townsend lost the election to Republican Robert L. Ehrlich Jr. and his running mate, Michael F. Steele. The win made Ehrlich the first Republican to serve as Maryland’s governor since Spiro Agnew in 1966.

5. Larson Chose to Focus on Education in Maryland After Leaving the Naval Academy

After retiring from the Academy in 1998, the Navy offered to help Larson move wherever he and his wife wanted to go. But Maryland had become home, and the Larson’s decided to stay permanently. He maintained his focus on education.

Larson became the Vice Chairman of the University System of Maryland Board of Regents. In that role, he led a task force that recommended management and funding changes to the university’s 11 campuses. He told the Post in 2002 that he enjoyed the anonymity of working in higher education. “We developed a great deal of privacy over the past four years. It was nice to go down to the Giant with my ball cap, T-shirt and shorts on and have nobody notice me.” 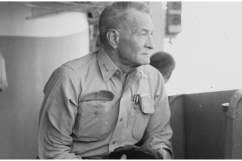 Loading more stories
wpDiscuz
0
0
Would love your thoughts, please comment.x
()
x
| Reply
Chuck Larson was a four-star Admiral in the U.S. Navy and was lifelong friends with Senator John McCain.