Christina Giuffre is the 21-year-old Pennsylvania woman who went missing after failing to show up at her job at a local gym in Bucks County on August 29. On September 1, the Middletown Township Police Department said in a statement, “Christina has been located in Montgomery County, PA. She is fine and unharmed. She was not missing against her will. Members of MTPD have traveled to the PD headquarters that found her and we have interviewed her in person. We are closing out this case. Thank you to everyone who shared the post and got word out. The entire MTPD and the Bucks County Detectives Office worked this case non stop since she was reported missing. We are happy she is safe and sound and that this is finally resolved.”

According to a Facebook post from the Middletown Township Police Department, Giuffre lives in the Forsythia Gates area of Langhorne, about 25 miles northeast of Philadelphia.

Giuffre was last seen at around 3 p.m. on August 29 in Croydon, Bristol Township. Later, police said that Giuffre was seen in the Flowers Mill Giant store on the night of August 29.

Giuffre had been due at work at Retro Fitness on New Falls Road at 5 p.m. but never showed up. Giuffre drives a black Honda Civic with a Pennsylvania plate reading KMN0274. Her family’s attempts to reach her cell phone have been unsuccessful. Giuffre was wearing a red tank top with white or gray pants. She is five feet tall and weight around 95 pounds.

In April 2018, Giuffre’s father, Mark Giuffre, died tragically at the age of 56 following an aneurysm due to a congenital condition called AVM. According to his obituary, Mark Giuffre was a forklift operator who lived in Croydon for most of his life. The tribute says that Christina Giuffre was his only child. On a Go Fund Me page that was set up for his funeral expenses, Mark Giuffre’s sister wrote in part, “Mark has one child, my niece Christina who has not left his bedside in days. Any amount will help defray the cost. Thank you in advance from the bottom of our hearts.”

Giuffre’s aunt, Veronica, issued a plea for her niece to come home on Facebook writing that, “[Giuffre] never misses work even when she is sick. Please pray for our family.” A cousin of the missing woman wrote on Facebook that he is flying in from California to help aid in the search for Giuffre. 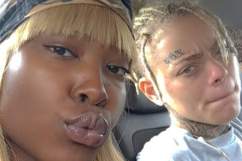 Read More
Breaking News, Missing
wpDiscuz
0
0
Would love your thoughts, please comment.x
()
x
| Reply
A 21-year-old Pennsylvania woman is missing after she failed to show up at her job at a local gym in Bucks County.