David Katz has been identified as the sole suspect in a shooting that occurred in Jacksonville, Florida, on Sunday, August 26. Before his identity was confirmed, social media users were doing their best detective work, trying to figure out who the gunman was.

There was one tweet in particular that had a lot of people convinced that they had solved the case — but the tweet was just an unfortunate coincidence. The tweet was sent out by Derek Jones a.k.a. “Djones,” who identifies himself as a “professional Madden player” in his now-removed Twitter bio.

His tweet was not meant as any kind of threat, nor did it have any direct correlation to what happened a few hours later at the Madden event in Jacksonville. However, as you can see, the tweet was chilling, especially before police had released the name of the suspect.

“Single [elimination]. In the mood to kill someone tonight,” the tweet read. You can see it below.

Shortly after Jones became the talk of the internet (and the one whom people were pointing fingers at), his account was suspended. This led to even more chatter about Jones being behind today’s shooting. However, police soon set the record straight, confirming that the suspect was 24-year-old Katz — a Baltimore native.

Authorities say that Katz opened fire at the GLHF Gaming Bar at The Jacksonville Landing around 1 p.m. Eastern. Katz had lost early on in the tournament and was said to be upset over it — so upset that he left the event only to come back an unknown amount of time later with a gun in his hand.

One witness told the Los Angeles Times that Katz “targeted a few people” before turning the gun on himself. At the time of this posting, three people had been confirmed dead and several others were wounded.

Jones has not released a public statement about the tweet or about Sunday’s shooting. His Twitter account is still suspended at this time. The screenshot above was taken before the account was removed from the social media site. 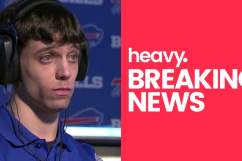