Duane Rhedd Youd has been identified as the pilot who slammed a small plane into a house in Payson, Utah early Monday, August 13, police say. He was killed. His wife and her son were inside the home at the time but luckily escaped uninjured after the crash and fire that started as a result.

The crash happened around 2:40 a.m. local time. Officials told local reporters on the scene that it appeared 47-year-old Youd had crashed the plane on purpose into his own home, hours after being arrested on accusations of domestic violence.

According to his Facebook page, Youd worked as a MedEvac and corporate pilot. Police told KUTV that Youd stole the plane used in the crash, a twin-engine Cessna Citation 525, from the company he worked for, VanCon, and then flew it into his home.

1. Youd was Arrested Hours Before the Crash On Accusations of Domestic Violence

Utah County SheriffDuane Youd was killed after police say he crashed a jet into his own home on purpose.

The Payson Police Department confirmed to Salt Lake City police station Fox 13 that Youd was arrested around 7:30 p.m. Sunday. He was booked into the Utah County Jail just before 8 p.m. Youd posted bond at 9:42 p.m. The amount is listed on the Utah County Sheriff’s Office Corrections Bureau as $1,850. The charge was listed as criminal mischief.

Tune in to KSL 5 News at Noon. @newsyCaitlin will be live with updates regarding plane crash in Payson, which officials are saying was an intentional act by Duane Youd, the pilot who died in the incident. pic.twitter.com/wl3dd0cEFL

Utah County Sheriff’s Sgt. Spencer Cannon told the Salt Lake Tribune that people accused of domestic violence are typically required to sign an agreement to stay away from the alleged victim when they post bail. According to the Payson Police department, Youd requested he be allowed to return home in order to pick up a few items. An officer was on hand while Youd retrieved some belongings and his vehicle back at the house.

Police have also confirmed that Sunday night’s incident was not an isolated event. Officers have been called out to the Youd residence before to investigate alleged domestic violence.

Duane Rhedd Youd worked for Guardian Flight Alaska, according to his Facebook page. The company is an emergency rescue service providing air medical transportation. Its company profile page lists it has been in operation since 1997.

Youd stated on his profile that he worked as a MedEvac pilot for the company. The page does not state how long he had been employed there. Guardian Flight has not commented on its own Facebook page in response to Monday’s crash.

Youd also lists Endeavor Air as a former employer. Again, no dates are listed on his public profile.

3. Youd Has Been Married Since 2014 and Has At Least Two Children

Duane Youd has been married to Sandy Youd since August 16, 2014, according to his Facebook page. This appears to be his second marriage.

Sandy works as a real estate agent. She previously worked as a bus driver for the Nebo School District.

Youd lists two children on his page as well. Daughter Joslyn Youd lists her father’s company Rhedd’s Tint & Trim as a former employer. She no longer lives in Payson; her current location is listed as Queen Creek, Arizona.

4. Youd Owned a Company That Specialized in Tinting Windows on Vehicles

According to both his LinkedIn and Facebook profiles, Youd owned a company called Rhedd’s Tint & Trim. The business is based in Payson.

The company specialized in tinting the windows of vehicles. The website lists paint protection as another one of its key services. Rhedd’s Tint & Trim also sells accessories designed to prevent damage to a vehicle in the case of an accident.

He was originally from the Payson, Utah area. He graduated in 1989 from Spanish Fork High. The community of Spanish Fork is only a few miles away from Payson. 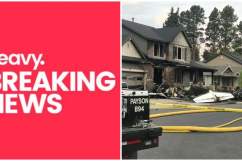 Read More
5 Fast Facts, Breaking News, Crime
Duane Rhedd Youd has reportedly been identified as the pilot who intentionally crashed a jet into his own home in Payson, Utah.