The Holy Fire in California just started Monday afternoon and exploded to 4,000 acres in size on August 7. Now, as of Wednesday, growth has slowed down a bit but the fire is still a major problem. Evacuations have been ordered for this fire and officials are working to keep it under control. Read on to see maps on the fire’s location and details about evacuations.

Where Is the Holy Fire? Maps to Help You Find the Fire’s Location on August 8

This interactive map of the Holy Fire, which you can view below or here, can help you stay updated on the fire’s location. This map also lists evacuation locations.

The fire is in Orange County, off Holy Jim Canyon Road, west of the North Main Divide. The fire started Monday afternoon and quickly grew to more than 100 acres, The OCR reported, but now it’s 4,129 acres with 5 percent containment. Damage assessments confirm that 12 structures have been destroyed as of Wednesday morning in Orange and Riverside Counties, according to Wildfire Today.

It’s good to view several interactive maps, just in case one map isn’t kept updated. This map, for example, is from CAL FIRE. You may need to zoom in to see the Holy Fire:

The California Governor’s office has another active fire map. You can zoom in to the Holy Fire. Sometimes this map requires a login, however. If it doesn’t work, just move on to the next interactive map and this one might work later.

But keep this in mind when viewing the above map:

Earlier today I posted a #GISsurfer map for the #HolyFire. At least some of the VIIRS hotspots (orange squares) on the east side of the fire are 'false positives'. The fire is not burning in residential areas at this time.

The fire is in Orange County, off Holy Jim Canyon Road, west of the North Main Divide. The cause is under investigation, but authorities have arrested Forrest Gordon Clark on suspicion of felony arson. Read more about Clark in Heavy’s story here.

Next up is a 3D map showing the approximate location of the fire.

And a map of the live stream cam of the fire:

This map shows the fire’s growth over such a short time:

Thinking of all crews battling the #Holyfire right now in #Mendocino, & sending prayers for their safety & all who reside near or who have lost property. Found this map of its growth, now considered #California’s largest #wildfire in its history! Source: @guardian pic.twitter.com/qDcbxqopys

The fire quickly grew to over 4,000 acres and 600 personnel are currently working on containing the fire in Orange County, Inciweb reported. Officials said the fire was on the north and south sides of the canyon, pushing up to the north Main Divide Road, and moving toward Riverside County. A public information hotline has been set up at 714-628-7085 for the Holy Jim area.

No major injuries have been reported from the fire.

Mandatory evacuations were ordered in the Holy Jin and Trabuco Canyon areas, and the Blue Jay and El Cariso campgrounds, ABC 7 reported.

Voluntary evacuations were issued for:

Tilson Shumate and his wife told ABC 7 that they barely made it out alive. “Fire travels faster than you think. It’s an incredible sensation to be in this and to be faced with life and death. We think we’re ready to die, but are we? I don’t know, man. I don’t want to go like this, Lord, get us out of here.”

A Red Cross evacuation shelter is set up at the Bell Tower Regional Community Center at 22232 El Paseo in Rancho Santa Margarita. Call first before heading out there, however. The shelter might close if no one arrives, but it will reopen if needed.

Evacuation details are constantly changing, so call your local officials or police if you’re concerned about your area. A public information hotline has been set up at 714-628-7085 for the Holy Jim area. 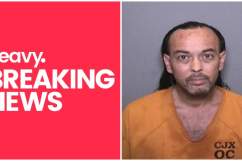