Senator John McCain has died. He and his wife, Cindy McCain, had been married for 38 years and were the proud parents of four children, Jimmy, Jack, Meghan, and Bridget (John also had three other children from a previous relationship).

The couple, who lived together in Phoenix, Arizona, have been through thick and thin over the years, but always supported one another and were a unified front for both their family and for their country.

1. Cindy Defended Her Husband Following Kelly Sadler’s Comment About Him During a White House Meeting That Took Place on May 10

Earlier this week, special assistant to President Donald Trump Kelly Sadler reportedly made a comment about John McCain during an internal meeting. During said meeting, White House officials were discussing President Trump’s nominee for CIA director, Gina Haspel. According to The Hill, Sadler’s comment was made while discussing McCain’s opposition to Trump’s choice.

“It doesn’t matter, he’s dying anyway,” Sadler said, according to a source.

Shortly after the comment was made, Cindy McCain took to Twitter to call out Sadler and to defend her husband.

“May I remind you my husband has a family, 7 children and 5 grandchildren,” Cindy posted with an @reply to Sadler.

Sadler has not responded to Cindy McCain, nor has she issued any kind of statement or apology about the comment she made about him.

2. They Welcomed 4 Children Together & Cindy Stayed in Arizona to Raise Them When John Went to Work in Washington D.C.

John and Cindy McCain have four children together. Cindy gave birth to three of the couple’s children, Meghan, Jack, and Jimmy. The couple adopted their daughter, Bridget, from Bangladesh.

Meghan McCain is, perhaps, the most well-known of the McCain children. She is a former Fox News contributor, and is currently a co-host on The View. The 33-year-old is married to Ben Domenech.

John “Jack” McCain IV, 31, is a Navy lieutenant and helicopter pilot. He is the oldest son of John and Cindy McCain. Jack and his wife, Renee, have one son together, John S. McCain V.

Jimmy McCain was also in the U.S. military, following in the footsteps of his father and his older brother. As a Marine, he served a tour in Iraq. He married his wife, Holly, in 2016.

John and Cindy McCain adopted their daughter, Bridget, back in 1993. That year, “Cindy visited Bangladesh and met the baby at an orphanage, who had a severe cleft palate. Cindy decided to bring the baby back to the United States, where she underwent years of surgery,” ABC News reported.

According to People Magazine, Cindy didn’t tell her husband about baby Bridget. She brought her home to the United States and introduced her to John.

Adopting Bridget was very special to Cindy McCain. She was on the Board of Directors for Operation Smile.

“Operation Smile [is] a non-profit organization whose mission is to repair cleft lips, cleft palates and other facial deformities for children around the world. She was a member of the HALO Trust Board, as well as a founding Member of the Eastern Congo Initiative. She is committed to raising awareness of the travesties facing women and children in the Congo,” reads an excerpt on the McCain charity website.

When John McCain decided to get into politics, he and Cindy decided that he’d go to Washington D.C. without his family. Cindy stayed back in Arizona and raised their kids.

“We wanted them to have a well-rounded life, and we gave them that out West,” Cindy told People Magazine back in 2008.

John McCain adopted his first wife Carol’s two sons, Doug and Andy. He and Carol also have a daughter, Sidney, who is now in her 50s.

3. They Met While John Was Still Legally Married to His First Wife & They Were 17 Years Apart in Age

John McCain met his second wife, Cindy, at a cocktail party in Hawaii back in 1979. At the time, he was still legally married to his first wife, Carol Shepp McCain; John and Carol were separated at the time.

“Schmaltzy as it sounds, it was love at first sight,” John McCain told Larry King during an interview back in 2002. There was a 17-year age difference between John and Cindy, which is something they tried to cover up when they first started dating.

“He made himself younger, and I made myself older, of course,” Cindy once told Ryan Seacrest. “In Arizona when you apply for a marriage license, it’s published in the newspaper. Of course when they published the application, we both found out together our true ages. It didn’t matter anyway. I felt like he wouldn’t be interested in someone as young as me – and he felt I wouldn’t be interested in someone that was older, like he was. So it was for true love that we did it. And it’s been a funny joke for our kids ever since,” she added.

According to the Los Angeles Times, John and Carol McCain’s divorce was finalized on April 2, 1980. He married Cindy six weeks later, on May 17 of that same year.

4. The Bond Between John & Cindy Was ‘Incredible’ & They Were Each Other’s Biggest Supporters

John and Cindy McCain exemplified the bond between a husband and a wife. In fact, those who knew them best simply couldn’t deny how in tune with one another the couple had been.

“The bond between them is just incredible,” family friend Betsey Bayless told People Magazine in 2008.

John and Cindy shared in joys and sorrows as a unified front. They supported each other through some very dark times, including a period in which Cindy was addicted to pain medication.

“[John] McCain has helped his wife through troubled times as well. In the early ’90s, after back surgery, Cindy became addicted to painkillers, some of which she swiped from the medical charity she founded,” People Magazine reported.

“He sat down next to me and said, ‘You should come to me first with whatever it is — I love you, I’m here for you, I will get through this with you.’ And he did,” Cindy previously told the outlet.

When John was diagnosed with brain cancer in 2017, Cindy stuck by his side and was there for the highs and the lows that he experienced each day.

5. They Started the McCain Institute for International Leadership

In 2012, the McCains founded the McCain Institute for International Leadership, a Washington D.C.-based think tank associated with Arizona State University. The organization and its initiatives focus on international affairs.

“The McCain Institute for International Leadership at Arizona State University is dedicated to advancing character-driven global leadership based on security, economic opportunity, freedom and human dignity,” the institute’s website reads.

The McCain Institute is non-profit in nature and receives funding from a diverse array of sources. According to a 2016 report from Bloomberg, the McCain Institute received $1 million from the Saudi Arabian government in 2014, as reflected in their filings with the Internal Revenue Service. Interestingly, Bloomberg Philanthropies is also named among a list of donors on the McCain Institute’s website. Other notable parties include Wal-Mart Stores, Inc., Fed Ex Corporation, Cisco Systems, Inc, Chevron, Daimler and MGM Resorts International, among others.

The institute’s Board of Trustees likewise includes multiple notable names. Among them is John Lehman, former Secretary of the Navy and a staff member for Henry Kissinger on the National Security Council. Lehman also served on the 9/11 Commission. Former Senator Joseph Lieberman also serves on the board.

McCain recently expressed regret in choosing Sarah Palin as his running mate in the 2008 presidential election, instead preferring to have selected Lieberman, a senator from Connecticut and long-time member of the Democratic party who still caucused with them at the time. 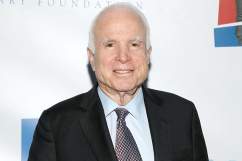 John McCain’s Brain Cancer: What Is a Glioblastoma?

Read More
5 Fast Facts, John McCain, Politics, US Politics
wpDiscuz
0
0
Would love your thoughts, please comment.x
()
x
| Reply
John and Cindy McCain were married for 38 years. The couple met in Hawaii and had four children together. Here's what you need to know.