Getty/YouTube Hooters According to TMZ, Jordan Ozuna might be the new girlfriend of Kourtney Kardashian's ex, Younes Bendjima.

Jordan Ozuna is rumored to be the new girlfriend of Givenchy model, Younes Bendjima. Until recently Benjima was dating Kourtney Kardashian.

Photos of Bendjima in Mexico on Monday were exposed by TMZ, revealing Benjima spending time with Ozuna. Ozuna is a former Hooters waitress who has dated fellow A-listers Tyga and Justin Bieber.

Tyga is especially notable, given that he is Kylie Jenner’s ex-boyfriend. So if Ozuna and Bendjima are in fact dating, this will be the second ex-KUWTK boyfriend for her to date.

Since the pictures were released by TMZ, Bendjima has since claimed that he and Ozuna are not together via an Instagram post. However, sources have told TMZ that Kardashian did in fact break up with Bendjima in early July after finding out that he’d been cheating on her.

As for Ozuna, she has also denied rumors of a relationship with Bendjima, telling E!, “Younes and I are not involved romantically at all. We were both invited to Mexico for a mutual friend’s birthday party with 13 other people.”

Younes Bendjima and Kardashian Are Reportedly Over, as of Monday

#BREAKING Kourtney Kardashian and Younes Bendjima SPLIT and he's already all over another woman https://t.co/T7SHGPOoC4

The news of Ozuna and Bendjima’s alleged new relationship comes pretty much at the exact same time as the news of Bendjima’s split from Kardashian. Kardashian and Bendjima dated for the better part of two years, and most recently were seen on a trip to Italy with Kardashian’s three children at the end of June.

Neither Kardashian nor Bendjima have commented on their relationship allegedly ending, nor has Ozuna posted anything on social media about her budding relationship with Bendjima.

A few months ago, Bendjima commented on a picture of Kardashian’s backside, “that’s what you need to show to get likes?” Fans immediately responded with negative backlash to Bendjima’s comment, and Kardashian was reportedly unhappy with his comment as well.

As for Ozuna’s romantic history, she dated Tyga in 2017, and Justin Bieber in 2014. Ozuna has also been married once before, which her mother-in-law spoke publicly about to CelebBuzz in 2014. Of her daughter’s marriage to a man named Daniel Ozuna, Kim Ozuna said, “They’ve been separated a good year. They were very young when they got married. They’ll figure it out on their own. They’re probably in the process of getting divorced.”

Ozuna’s maiden name is Galipo, though she’s held onto her marital last name even after separating.

According to TMZ, Kardashian was the one who ended the relationship with Bendjima. TMZ also reports that Ozuna is best friends with Johnny Manziel’s wife, Bre Tiesi, though it’s unclear whether that has anything to do with Ozuna and Bendjima meeting. 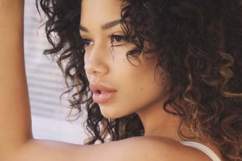