Glenn Jacobs, who wrestled for the WWE as Kane, defeated Linda Haney on Thursday night to become the mayor of Knox County, Tennessee. According to Bleacher Report, Jacobs, who was running as a Republican, received 31,739 votes, while his Democratic opponent Haney received 16,611.

While Jacobs, 51, had been running for office since 2016, his victory came as a surprise to many who knew him as the ruthless WWE superstar. This has led to many Twitter users turning Jacobs’ victory into memes; ones which play on the contradictory nature of his political career and his wrestling career.

“Kane is the mayor of KNOXVILLE,” wrote one shell-shocked fan. “LIKE THE ACTUAL WRESTLER. FULL ON WWE MONDAY NIGHT RAW KANE. IM LIVING IN A MEME.” Another amused user wrote “Kane is a mayor. If that doesn’t mean I’m getting old then idk what does.”

Kane is the mayor of KNOXVILLE. LIKE THE ACTUAL WRESTLER. FULL ON WWE MONDAY NIGHT RAW KANE. IM LIVING IN A MEME. pic.twitter.com/dORhbGPNYl

My boy Kane is a mayor now pic.twitter.com/j5lbjwhkt5

lmfao Kane one of my favorite childhood wrestlers✊?? now my mans a mayor pic.twitter.com/Jfsr7V6ZIf

Kane — yes, the one from the WWE — just became Mayor of Knox County, Tennessee. pic.twitter.com/qjVERh2DkA

Other users made comparisons between the way Jacobs would handle political topics and opponents with the way that he handled other wrestlers as Kane. “Kane is the new Mayor of Knox County, Tennessee,” wrote The Wee Man. “Speeding tickets in that town will now be getting paid on time.”

“I found out Glenn aka KANE from WWE was elected mayor of tennessee i think,” wrote another user. “I hope he says something about choke slamming SOMETHING.” Others jokingly remarked that his landslide victory against Haney was the equivalent of a “political choke slam,” like the meme below.

“Mayor Kane are you ready for the meeting?” pic.twitter.com/k6tXa6HcMs

The rest of the world upon hearing kane is a mayor: pic.twitter.com/tqxnEfUXEo

Former WWE star Kane has been elected mayor of Knox County, TN. I imagine his entrance to the courthouse would go like this: pic.twitter.com/ljLKmTFRaC

Uproxx reports that Jacobs has decided to play up the meme factor of his victory. After winning the election on Thursday night, the former wrestler walked out to address the crowd by playing his WWE walkout song: “Slow Chemical” by Finger Eleven. “Somebody told me we were about to do a cage fight,” he joked, after taking the stage.

This is not the first time that Jacobs has used the Finger Eleven song outside of the ring. When he married Crystal Maurisa Goins in 1995, he hired a cellist and a pianist to perform a more romantic version.

Glenn Jacobs takes the stage… "somebody told me we were about to do a cage fight" @wvlt pic.twitter.com/PtUkVQ7nox

Addressing the crowd on Thursday, Jacobs said that intends to “make our corner of the world a better place” now that he’s been elected. “No matter what happens, I will always be one of you,” Jacobs continued. “Call me mayor, call me anything you want, but I am always going to be one of you.”

For those who are fans of Jacobs’ legendary Kane persona, you needn’t worry. He told Pro Wrestling Sheet that he doesn’t plan on retiring from the WWE altogether now that he’s mayor. “I never rule anything out,” he said. “I think it would be great to have a PPV here in Knoxville. We haven’t had one in forever. If there’s a PPV, it would be an honor for me to take part in that.” 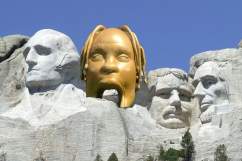