Getty Lady Gaga nude Instagram photos have the internet in a frenzy trying to figure out what she is promoting.

The pictures feature a partially nude Gaga, dressing herself in flesh-colored stockings and a nude sticky bra. Although her tattoos are easily distinguishable, the pop superstar still kept some of her more private areas blurred out.

In the first photo she shared, Gaga is seen bent over as she puts a pair of nylons on, with nothing else covering her body. The second photo shows the singer posing against a wall with her stockings pulled up to her waist, and thick, black eye makeup covering her lids while she gives a sultry look towards the camera. 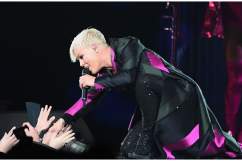 Gaga recently posted a series of other pictures by Linnetz that had the internet buzzing. Another collection of pictures showed bizarre images of Gaga with different body parts distorted, which had Instagrammers clamoring to figure out if she was hinting at her possible return to the horror anthology American Horror Story. However, there is still no confirmation on whether the pop star will be returning to the eighth season of the show as of Tuesday.

The fact that Gaga posted the three semi-nude pictures from another photo shoot with Linnetz has the internet wondering if she is collaborating on a new project with the photographer, since the last 18 posts on the star’s page were taken by Linnetz.

Gaga once again left the captions blank on her three newest pictures, aside form tagging Linnetz in them. However, users are speculating that the images could be a promotion for Gaga’s upcoming Las Vegas residency, Enigma, or her role in the upcoming remake of A Star is Born, featuring Gaga opposite of Bradley Cooper.

Gaga had previously discussed the eccentric boldness of her style, revealing she is always “keen to put her own edge on whatever is expected of her,” the Daily Mail reports. 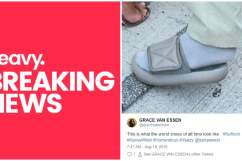 Loading more stories
wpDiscuz
0
0
Would love your thoughts, please comment.x
()
x
| Reply
Lady Gaga posted a series of risqué pictures with her 30 million Instagram followers Tuesday afternoon that has the internet in a frenzy.