Screenshot of Video Lester Holt is accused of "fudging" an interview with Donald Trump in 2017.

Lester Holt is trending on Twitter after President Trump accused him of “fudging” a tape on Russia. The tweet, which the president posted around 6 a.m., once more claims that CNN and NBC News are both failing networks, and that when “Lester Holt got caught fudging my tape on Russia, they were hurt badly!”

What’s going on at @CNN is happening, to different degrees, at other networks – with @NBCNews being the worst. The good news is that Andy Lack(y) is about to be fired(?) for incompetence, and much worse. When Lester Holt got caught fudging my tape on Russia, they were hurt badly!

In a series of three tweets, the president said the “hatred and extreme bias of me by @CNN has clouded their thinking and made them unable to function.” He primarily focused on CNN boss Jeff Zucker, who he said deserves to be fired, and NBC’s Andy Lack, as well as Holt, bringing up an interview the president had with Holt last year.

The interview he is referring to is a May 2017 NBC interview, in which he casually admitted to firing former FBI director James Comey for his lack of loyalty. Based on his tweet, President Trump is accusing Holt of “fudging” the tape, or, in other words, falsifying the interview through the use of special effects, which many far-right media outlets accused NBC of doing back when the interview first aired.

You can watch the full interview below:

In the interview, the president told Holt, “but regardless of recommendation, I was going to fire Comey knowing there was no good time to do it. And in fact, when I decided to just do it, I said to myself — I said, you know, this Russia thing with Trump and Russia is a made-up story. It’s an excuse by the Democrats for having lost an election that they should’ve won.”

The interview led many to believe that Trump’s actions in firing Comey were actually an obstruction of justice in the Russia investigation, a possibility Special Counsel Robert Mueller is investigating.

Trump’s tweet did not specify what part of the interview he was specifically accusing Holt of “fudging,” but several twitter users speculate that Trump is throwing out accusations to try to deflect the fact that he put himself in danger by essentially admitting to firing Comey because he was investigating Trump.

“Trump is lying about Lester Holt,” according to Brian Klaas. “The entire unedited interview was posted online. And Trump is likely lying about it because he now understands that he put himself in legal danger by admitting, on camera, that he fired Comey *because* he was investigating Trump’s campaign.”

Trump is lying about Lester Holt. The entire unedited interview was posted online. And Trump is likely lying about it because he now understands that he put himself in legal danger by admitting, on camera, that he fired Comey *because* he was investigating Trump’s campaign. https://t.co/sLzEUMgmF5

Another user wrote: “More than a year later, Trump is suddenly claiming that NBC “fudged” his interview with Lester Holt, in which Trump admitted he fired Comey over Russia. The full interview is available online. What exactly was fudged?” 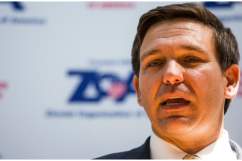 Read More
Donald Trump, NBC, Twitter
wpDiscuz
0
0
Would love your thoughts, please comment.x
()
x
| Reply
Trump is accusing Lester Holt of "fudging" a 2017 interview that the president had with Holt, when he essentially admitted to firing James Comey for lack of loyalty.