The Mendocino Complex Fire has become the largest fire in California’s history, and it includes the Ranch and River Fires, which are totaling more than 240,000 acres as of 9:30 a.m. August 7. Here are details and maps of the fires’ current locations.

Here is a map of the two fires, as released by CAL FIRE this morning:

You can see a full PDF of the map here.

Below is an interactive map of the River and Ranch Fires, part of the greater Mendocino Complex Fire.

You can also view the following maps to get a better idea of the Ranch Fire’s and Mendocino Complex Fire’s locations. Just zoom in to the individual fires to get a better idea of where they are located near you. This map below is an interactive map of some of the bigger fires in California, constantly being updated, provided by CAL FIRE and Google. Fires in red are active and fires in black are contained. Read the next section for details about the fires listed on the map. Zoom in to the Ranch and River fires for more details.

Next is the California Governor’s office’s fire map for comparison, which is embedded below. Zoom into the Ranch Fire or click on the Ranch Fire’s name for more details.

And next is another active fire map from Google’s Crisis Map. Zoom in to areas of interest.

And another map is below:

Cal Fire's current map of the #MendocinoComplexFire, now California's largest fire.
Watch as the record continues to break again and again in the coming years.
From: https://t.co/AJhfNkiQ3p pic.twitter.com/enam3vFsCh

Since just Friday night, these fires have grown 80 percent in total. Exhausted firefighters have been working nonstop and no deaths have resulted from the fire. But resources are also being spent on the Holy Fire in Orange County, which has grown to more than 4,000 acres.

So far, 75 residences have been destroyed from the Ranch Fire, and more than 11,000 structures are threatened. The fire remained active overnight, spreading north and east.

See Heavy’s story below for a list of evacuation orders for the Ranch Fire: 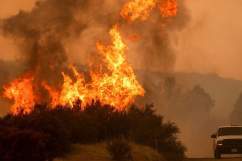